Paradise Valley is a fairly solid entry in the John Mayer studio album catalogue, but it falls short of what those of us who were fans of the John... 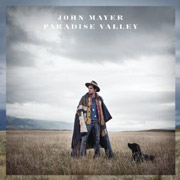 If there is one thing that John Mayer has shown us throughout his career of making studio albums it is that he is capable of writing catchy bubblegum-esque pop songs.  That hasn’t been the case as much with his two most recent folk/country-driven albums, but it was especially the case with his first four albums.  Not to mention, since his extremely public breakdown of sorts back in 2009 shortly after the release of his fourth album Battle Studies (QRO review), it seems like he has been keen to get back to his roots so to speak.  All that to say, none of the above live up to what the man is truly capable of…

There are three words that come to mind when I think of John Mayer’s true capabilities and those words are “John Mayer Trio.”  The recorded music that Mayer did with famed session musicians Pino Palladino and Steve Jordan is, quite frankly, some of the best music since the year 2000.  It rocks in a way that nothing else Mayer has ever released has.  So why is it that with his new album Paradise Valley and its 2012 predecessor Born and Raised (QRO review) he seems so content to settle for subdued Neil Young-ish songs that – while good – aren’t great (sidenote: there’s definitely nothing wrong with Neil Young)?  Perhaps it is just the effect of his recently purchased property in Montana on which he now resides.

It’s an interesting conundrum because there certainly aren’t any over-the-top catchy radio singles on Paradise Valley similar to past hits such as “Your Body Is a Wonderland”, “Daughters”, or “Waiting On the World To Change”.  Probably the closest thing to something like that that on this album is the song… well, there simply isn’t one.

A track that is sure to garner audience attention is “Who You Love”, which is a duet with the ever-famous Katy Perry (QRO album review), who fulfills the real life role of Mayer’s on-again/off-again girlfriend.  It is clearly meant to address the public criticism each of these people have endured for being involved with one another.  Take Perry’s verse, for example, which features the lyrics, “My boy… some have said his heart’s too hot to hold… but you should see him when he shines.”  It’s not a bad song, but runs the risk of being a tad cheesy for the country/folk vibe that Mayer is clearly going for with this album.

There is also the short transition track “Wildfire Interlude”, which features another popular vocalist in Frank Ocean.  It’s not even a minute and a half long, but is clearly one of the album’s more interesting points, with Ocean’s original brand of singing that almost sounds like talking.  The lyrics are so interesting it makes you wonder if Mayer was even the one to write them or if he let Ocean just tell whatever story he wanted to.  Either way, it’s interesting to listen to the album opener “Wildfire” and then follow it up with this one.  It’s certainly open for interpretation.

So that’s that, Paradise Valley is a fairly solid entry in the John Mayer studio album catalogue, but it falls short of what those of us who were fans of the John Mayer Trio know that he is capable of.  Hopefully some day soon he will decide to venture into that territory again.  After all, who says you can’t live on a ranch in Montana and be a blues-rock musician?