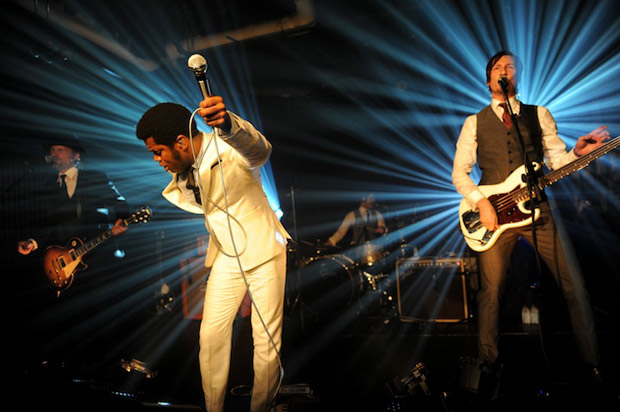 John Varvatos is probably known best to the wider world most recently for serving as one of the celebrity mentors on NBC’s Fashion Star, but he’s been in fashion business since the eighties, first at Polo Ralph Lauren & Calvin Klein, then starting his own house in 1999.  Shortly after going out on his own, he opened up a boutique in (where else?) SoHo in New York, but five years ago he came to the Lower East Side when he moved into 315 Bowery – a.k.a. what had once been the famed CBGB’s.  And John Varvatos Bowery celebrated five years there with Gary Clark Jr., Vintage Trouble, and more on Wednesday, April 10th. 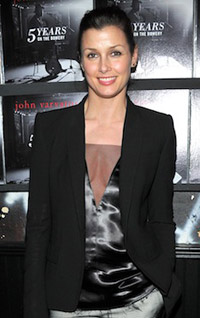 While 315 Bowery has certainly gotten classier with Varvatos moving in, the space hasn’t gotten any bigger, which led to a super-cramped event.  Far longer than it is wide, with the stage at the back but a long bar on the side, it was nigh-impossible to get anywhere close to the two bands playing (presumably unless you were in VIP, with celebrities such as Renee Zellweger, The Walking Dead’s Norman Reedus, and Billy Gibbons of ZZ Top – though Blue Bloods’ Bridget Moynahan was actually seen among the hoi-polloi).  Everyone also had their coats still on, because the store doesn’t have a coat check (or bathrooms – but they did provide port-a-potties outside), and the city was hit with a serious downpour right as the evening began.  Even security, with their handy mini-flashlights, had trouble moving through the crowd, and God help you if you’d left your friend up front to get drinks for the both of you and expected to return to where you’d been standing.  Of course, the drinks were free, and though the high percentage of mixed drinks to beers being ordered put a strain on the bartenders (always a problem at fashion parties), the wait wasn’t interminable.

Click here for photos of Gary Clark Jr. from this show in the QRO Concert Photo Galler

For a party at what had once been the most famous punk rock club in the world, the line-up didn’t throw back to the old venue’s punk/new wave heyday of the late seventies (and certainly not the hardcore punk that the place had hosted in the eighties & nineties), but further back to the actual original name, ‘Country, BlueGrass & Blues’ – albeit it with 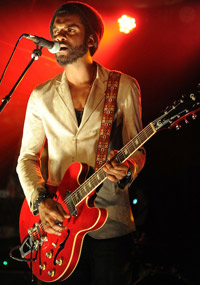 modern-day acts.  Even if you were still drying off and couldn’t see Vintage Trouble, one could still hear their active mix of soul, funk and blues, and Gary Clark Jr.’s blues-rock from Austin (the same town as Zellweger, and he’s next headed to Florida for Tortuga Music Festival – QRO preview – which is headlined by her ex, Kenny Chesney).  While both are popular new acts, they’re hardly on the cutting edge – Vintage Trouble just came off opening for the aged Rolling Stones, and despite Varvatos calling Clark “the future of music,” the blues have been around even longer than rock – and had already ‘come back’ (if it’d ever left) with Jack White.  But both made for engaging & exciting performances for the anniversary event.

Fashion Star’s second season just began last month, but John Varvatos Bowery is hosting the legendary Cheap Trick on April 28th (QRO NYC Show Preview), and the band will be playing their iconic Cheap Trick at Budokan – the album that gave birth to the concept of ‘big in Japan’ – for its own thirty-fifth anniversary.

Rhydian Dafydd of The Joy Formidable