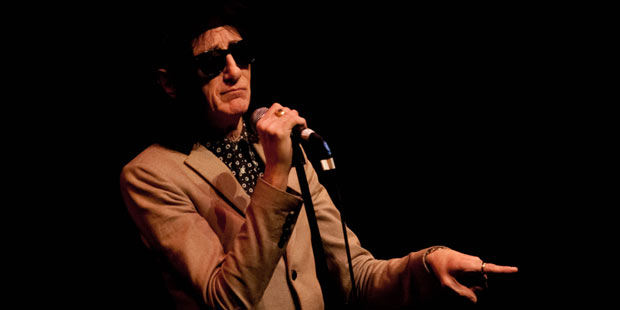 Sometimes objectivity is over rated.  Reviewing John Cooper Clarke is one of those times so I’ll put my cards on the table.  Asking me to review a John Cooper Clarke gig is like asking Mitt Romney to review God.  It’s a slam-dunk.  Although in fairness I should point out that JCC has not told me that I should open aeroplane windows at 35,000 feet or that Syria is Iran’s route to the sea.  But if he did tell me, I’d believe him. 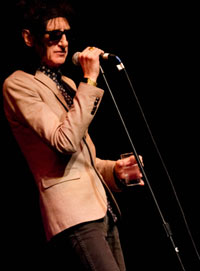 At this point I should say that I am aware that JCC is most definitely an English peculiar.  If you’re from anywhere other than good old Blighty you probably haven’t heard of him but all I’ll say is check out the closing credits of the penultimate episode of The Sopranos.  I’ll wait while you Google it.  Add the word Chickentown if you aren’t getting any joy.  Done it?  Good.  Big Phil Leotardo (soon to die) is sitting at the bar.  He looks up at a picture of his brother Billy (dead).  He swears vengeance on Tony Soprano (soon to die?  Who knows).  The music starts.  A strange electronic pulse and then a distant sounding vocal delivered in a broad Salford accent.  (For the uninitiated Salford is a small village on the outskirts of Manchestershire).  The music is "Evidently Chickentown" by John Cooper Clarke.  Hopefully you’re impressed.  If not, well to be honest if you’re not impressed then you’re opinion doesn’t count for much.  Because this is Johnny Clarke we’re talking about.  Now that you’re suitably impressed we can move on. 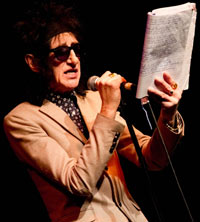 "Chickentown" was the closer of Tuesday, October 23rd’s show at the Drill Hall in Lincoln.  And for every mild obscenity beginning with B in the Sopranos version you need to substitute a stronger alternative beginning with F.  Got the picture?  Good.  According to JCC he likes to play the song live because his swear box functions as a high yield pension plan.  It sounds plausible.  JCC is 63 and managed more obscenities per minute than Bowling For Soup who I saw on Monday (QRO live review) and who were undeniably pretty rude.  The man makes swearing into an art form.  Fucking A.

The first thing you notice about the man himself is how well he looks, much better than when I last saw him in Sheffield some three or four years ago.  Positively spry.  Having spent most of the 1980s living hand-to-mouth as a result of his heroin habit, Clarke appears to have straightened up with a vengeance.  Regular BBC radio slots on Radio 6 Music and the Radcliffe and Maconie Show have raised his stock – he has even presented an alternative ‘Thought For The Day’ on Radio 4.  Surely the dreaded ‘national treasure’ epithet can only be a few years away.  JCC is a man reborn. 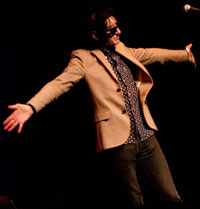 Reborn old admittedly, reborn close to death quite possibly.  He doesn’t buy twin packs of toothbrushes.  But he looks well, pipe cleaner thin as ever, at times appearing to be fighting a losing battle to gain mastery of his microphone stand, in a beige jacket, polka dot shirt and skinny jeans, black sunglasses and of course the trademark big black pompadour, looking like a geriatric young Bob Dylan he rattled through his poetry at breakneck speed, old favourites like "Beasley Street" and "Chickentown", newer additions like "Hire Car" and "Beasley Boulevard".  And for the anoraks among us a single precious verse of "36 Hours", probably his best song of all, and performed only rarely.  On the way there are verses about Chlamydia, prison life and falling in love with one’s own wife.  And then there are the riffs – not quite stand up comedy, not quite reminiscence, but spectacularly funny, scatological and erudite at the same time.  Topics covered during the course of the evening include marine biologists, marriage, prison, sexual deviance, Dean Friedman and the inherent inscrutability and mischievousness of the Helvetica font family.

I had been told that I can take photos for the first twenty minutes of the show and I stuck to my time limit.  The last thing anyone in an audience wants is to draw the wrath of John Cooper Clarke upon themselves.  After that I just put the camera away, sat back and enjoyed the Cooper Clarkiness of it all. 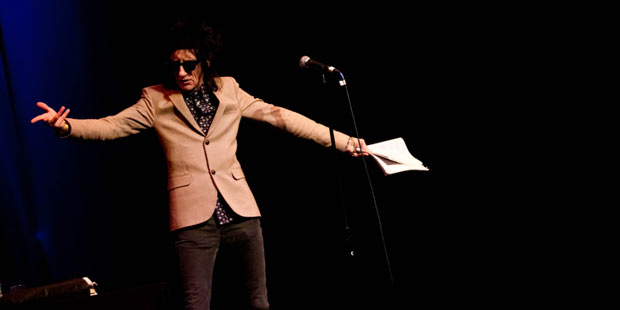