<img src="http://www.qromag.com/wp-content/uploads/2012/08/johnfruscianteleturlefrep.jpg" alt="John Frusciante : Letuf-Lefr EP " /><br /> John Frusciante has an uncanny ability to integrate his inherent need to be a total weirdo with being able... 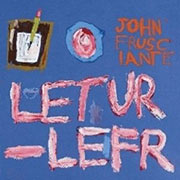 Let’s get right to it, this is good music.  John Frusciante has an uncanny ability to integrate his inherent need to be a total weirdo with being able to make music that both fulfills that need, yet is still quite accessible to the listener.

His latest musical offering is entitled Letur-Lefr (he attempts to explain the title on his website but ultimately ends up providing more confusion than clarification) and is a five-song EP that is its own entity but also meant as a precursor to a full-length album coming soon with an even more entertaining title – PBX Funicular Intaglio Zone.

The use of electronic elements on Letur-Lefr might surprise many, as Frusciante is most famously known for his work with the guitar.  With this release it would seem that he has decided to hang up his guitar and bust out the synthesizer instead.  That he is able to make such interesting-sounding songs with such ornate soundscapes and employ little to no guitar throughout is what makes this small collection of songs so rich and interesting.

Something unexpected, yet rather welcome with this release was the use of hip hop elements mot notably on the songs "909 Day", "FM", and "In My Light", which all feature famed rapper and Wu-Tang Clan member RZA (QRO photos).  Hip-hop influence is also present in the beats on these songs as well.

Normally with a collection of songs one or two will stand out, but with this short and sweet EP they are all equally engaging.  They pass by rather quickly, what feels like too quickly.  They are interesting to listen to and easy to get engrossed in.  They aren’t perfect, but that is the essence of John Frusciante’s music.