<img src="http://www.qromag.com/wp-content/uploads/2009/12/johnmayerbattlestudies.jpg" alt=" " />One of the most popular guitarists of his time takes quite a different approach from previous records. ... 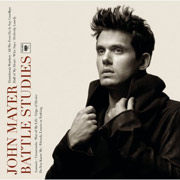 John Mayer has become one of the most popular guitarists of his time.  The artist having been first recognized for his mellow, acoustic sounds has also earned respect as an innovative blues musician after his 2006 Continuum.  Now having released his fourth album, Battle Studies, the artist takes quite a different approach from previous records.  Co-produced with Steve Jordan, Battle Studies is a passionate and heart-felt album which varies a lot in style, going from folk to blues.  The record is not only transitional but also quite transparent to Mayer’s emotions, resulting in a skillfully constructed and liberating album.

Consisting of confessional and emotionally driven compositions, the album opens with “Heartbreak Warfare”, a delicate song quite consistent to Mayer’s style.  This rock/pop tune is about the way we hurt the ones we love.  It follows with “All We Ever Do Is Say Goodbye”, a poignant track about a distressed romantic affair.  “Half of My Heart”, a duet with Taylor Swift is a very folk-like song, with strong acoustic ballads and tranquil vocals.  One favorite is “Who Says”, a self-reflecting song about getting stoned and dealing with life’s matters.

Battles Studies may not have reached some expectations, but there is no denying that this refined collection of translucent compositions is just what Mayer needed.  The record not only consists of a little bit of everything, but is refreshingly honest and undoubtedly a well-crafted album.