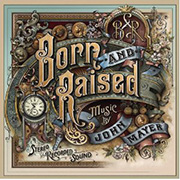 Apparently, John Mayer woke up one morning and decided he was country folk artist.  There are undoubtedly legions of disappointed fans that are absolutely stewing with anger.  Mayer has successfully cranked out a totally sub-par album.  From over-used and badly shaped lyrical concepts to corny guitar lines with grossly average tone, Johnny-boy has spared not one single aspect of his latest project from tastelessness.

Naturally, someone as popular as John Mayer is always going to have masses of die-hard fans, and there will always be those who like songs simply because they hear them on the radio.  This is all well and good.  Musically, however, Born and Raised is totally worthless.

“Walter Grace’s Submarine Test, January 1967” is a painful ballad about a gentleman who built himself a submarine with elbow grease and a library card.  This, needless to say, is the stuff of children’s tales, and has no place in the work of an alleged musical genius.  That the track teases you with a lovely little horn intro before falling into further country madness is infuriating.

It’s a horrible album, put out by a mediocre artist who has evidently lost his way.  John Mayer has shown, time and again, that he is a more-than-capable musician.  Unfortunately, he has no idea what to do with it.  For now, the hope that the next one will be better will have to be enough.