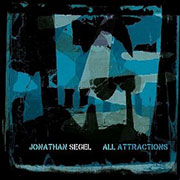 The Bay Area’s Jonathan Segel is best known for his work in the genre-crossing/defying alt-rock outfit Camper Van Beethoven, but the multi-instrumentalist has performed in numerous other groups (such as Sparklehorse in the nineties) and done his own solo material.  With All Attractions, the northern Californian definitely leans on the jam, but for an album that is both epic and touching.

In Camper and his work in other groups, Segel is primarily a violinist, but he focuses on the guitar on All Attractions – there are a lot more rock guitarists than rock violinists out there, so it’s only natural that he’s more sought-out elsewhere for his violin, and thus his solo record would be where he gets to most play his axe.  Segel does extend his guitar work into jam-lengths – openers "(Ever and) Always" & "Hey You (I Know You Know Me)" average at eight minutes, while closer "I Know You Know Me (Hey You)" nearly reaches thirteen, with an average of about six minutes per track on the record.  Thankfully, Segel knows more than enough about melody to eschew both jam-guitar wankery and rock guitar shred solos, instead using his instrument to carry the listener.

Extended pieces like the openers & closer are large and encompassing, but also can touch in a more intimate fashion.  "I Know You Know Me (Hey You)" manages to bring everything together in a superb fashion, both grand instrumentals and moving intimacy.  Indeed, the longer pieces like those three and the ‘lost Americana’ "The Dark Torch" outshine the (relative) shorter ones, such as the more psyched "Listen", grind "Singularity", and a bit funkier "What Goes Around", though the shortest song on Attractions, "The Good One", might be the Good-est one.

And for lovers of the jam, there’s also a bonus disc of seven improvised instrumentals, Apricot Jams, that goes with All Attractions.

Camper Van Beethoven are gearing up for a new album, their first since 2004’s reunion record New Roman Times.  But before that, pick up Jonathan Segel’s All Attractions for big & small journey.