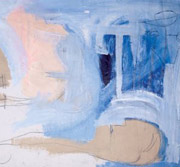 Calling an artist ‘singer/songwriter’ sounds like it describes the music, but actually really doesn’t – all it tells you is that he or she is a solo artist (who may or may not have a backing band), and that artist sings and writes the songs.  That’s true of a lot of musicians out there.  Nevertheless, ‘singer/songwriter’ has always had the connotation of a stripped, emotional sound, focused on vocals and one instrument (usually guitar or piano), even when it can encompass more.  ‘Singer/songwriter’ in both its looser and tighter meanings has always applied to Joseph Arthur, but it’s the more traditional ways that are found on his return to solo work, The Graduation Ceremony.

For his past two LPs and a string of EPs (QRO EP review), Arthur worked with a backing band, The Lonely Astronauts (also the name of Arthur’s own label), but he has returned to strictly solo (though still on Lonely Astronaut Records) for The Graduation Ceremony.  As the album title suggests, the record is focused mainly on the waning days of childhood/adolescence, before going out into that big, bad world.  As such, the ‘summer’s end’ emotion of pieces such as opener “Out On a Limb”, “Almost Blue”, “Face In the Crowd”, “Midwest” and others has a definite sad power – but Arthur can also get a little too plaintive and ‘talking about emotions’, such as with “Someone To Love” or “Gypsy Faded” (which has the rather banal line, “Now that I’m blind / I can finally see”).  It’s not listening to teenage poetry, but there’s a little bit of that in there.

Click here for photos of Joseph Arthur at Music Hall of Williamsburg in Brooklyn, NY on October 4th, 2014 in the QRO Concert Photo Gallery

For his first solo album in a while, Arthur doesn’t necessarily skimp on the instrumentation – “Limb” and “Gypsy” both have strings, while “Almost Blue” goes bigger in its tale of lost childhood.  But there are also stripped and intimate pieces, such as the near-hymnal “This Is Still My World” or closer “Love Never Asks You To Lie”.  Instead, solo Arthur doesn’t vary his style up as much as in his work with The Lonely Astronauts, sticking to beauty that can be somewhat too lovely at times.

A ‘musician’s musician’, Arthur was discovered by Peter Gabriel, and has a big fan in Michael Stipe (of little band known as R.E.M. – QRO album review).  He’s also known for making recordings of his live shows, which are available for purchase immediately following his shows.  The Graduation Ceremony isn’t as varied or interesting as some of Arthur’s other work, but it’s still a solid and compelling goodbye to one’s days of youth.