Joseph & The (not so) Lonely Astronauts played the Manchester Deaf Institute in England. ... 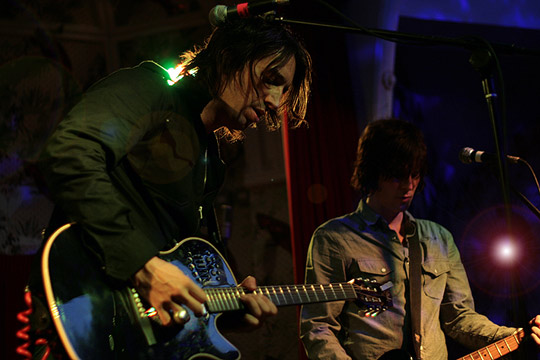 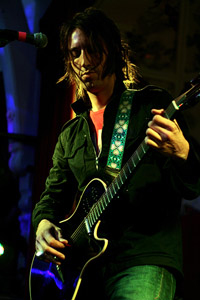 The crowd is familiar.  The same faces show up for another performance from Joseph Arthur.   Joseph arrives on stage.  The crowd soon settles and the room is silent.  The iridescent lights fill the walls.  The glitter ball suspended to the ceiling above rotates creating patterns.  Meanwhile the sounds from Joseph’s extensive collection of pedals fill the room.  Electronic guitar loops soon overwhelm the tiny hall and Joseph begins to perform.

As the performance develops the members of the band arrive.  A member of the crowd shouts “Joseph and the not so lonely astronauts”.  With glancing smiles towards one another the crowd seem to agree with this remark.  The band had a great presence; therefore lonely would be last thought in any ones mind. 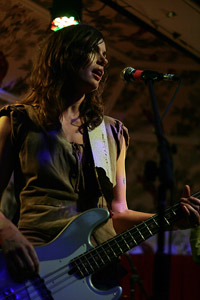 The band seemed to gel very well and Joseph seemed very relaxed and loose as he contemplated which song he was going to play next.  He placed his foot on his pedal and began to loop some recognizable chord progressions.  The guitarist Kraig Jarret Johnson gave off a smile, which suggested he had just figured out which song Joseph had spontaneously decided to perform.

Sybil Buck (former Yves Saint-Laurent model) had a huge presence on stage as she gracefully rocked back and forth. She strummed a great set of strong melodies on the bass guitar.

Joseph and the Lonely Astronauts played an interesting mix of songs.  The favorite songs seemed to be “Slide Away”, “Devil’s Broom”, “It’s Okay To Be Young”, and of course “Honey and the Moon”.

The Most Serene Republic : …And the Ever Expanding Universe