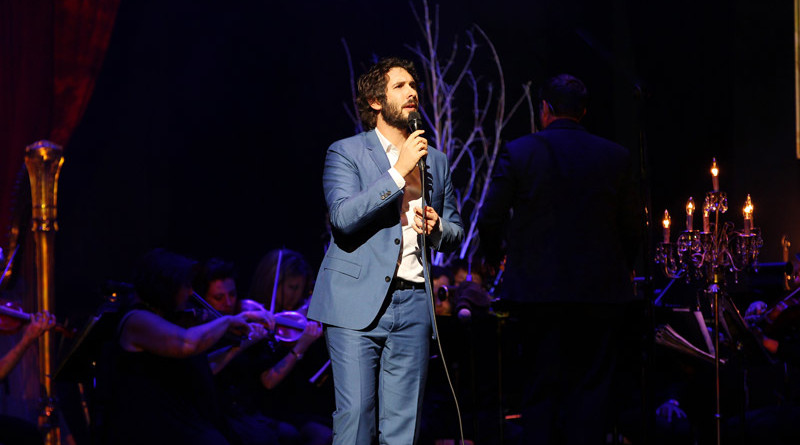 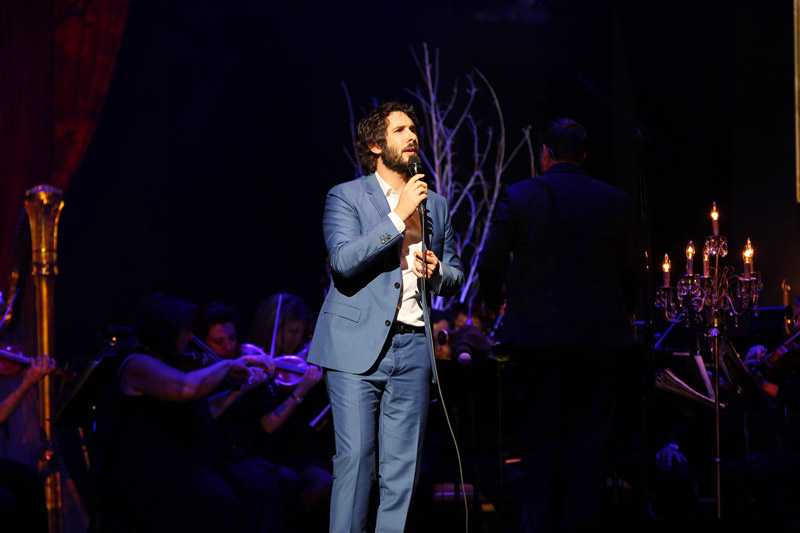 Click here for photos of Josh Groban at Prudential Center in Newark, NJ on October 30th, 2013 in the QRO Concert Photo Gallery

After a two-hour drive across England’s barren, bleak Peak District, with it’s strong winds and heavy rain, who would have thought Manchester’s Bridgwater Hall would feel like the warmest place on the planet on Saturday evening? And warm not because of some snazzy, eco-heating system, but rather because of the generous welcome given to his audience by Josh Groban, at the start of a short UK mini-tour on November 29th. Coming onto the stage in front of a full house, and wearing a dark grey suit and open-neck shirt, Groban was accompanied only by pianist Mark Stephens. He opened the show with a stirring performance of “Pure Imagination”, taken from Charlie & The Chocolate Factory. At end of the first verse, the curtains were pulled back – to gasps and applause from the audience – revealing a country house drawing room setting, complete with an enormous deep red floor rug, bookcase, and lit chandeliers. And an ‘orchestra’ comprising super-talented local musicians led by Groban’s go-to conductor, Sean O’Loughlin. JUST FANTASTIC!

Over the next two hours, Groban entreated an appreciative audience to a medley of songs from musical theatre, largely taken from his recently released Stages album, as well as songs taken from outstanding musicals, and songs which have had a profound influence on Josh’s life so far. Groban also entertained everyone with his witty and thoughtful anecdotes, including that “musical theatre is in my heart,” and that such a love of stage songs can be traced back to his parents’ collection of VHS tapes, which was his introduction into the world of Stephen Sondheim. Oh yes, we now know he likes a pumpkin spiced latte too! Before heading off into “Try to Remember”, taken from The Fantasticks, and in which he was accompanied by the incredible Tariqh Akoni on guitar, Groban greeted the capacity audience with “Good Evening Manchester, it’s lovely to see you again,” before remarking that “Bridgewater Hall is one of the great concert halls in England,” appreciating that some venues on the U.K. side of the pond are named after British aristocracy rather than U.S. telephone companies. Corporate USA, take note…

One of the highlights of the first act of the concert was a duet with the lovely, melting soprano Louise Dearman, who starred in the stage musical Wicked. Dearman and Groban gave a beautiful performance of “All I Ask of You”, from Andrew Lloyd Webber’s Phantom of the Opera. Other highlights included Dearman’s stunningly wonderful “Defying Gravity”, the signature song from Wicked, and Groban’s performance of “Anthem”, from the musical Chess, written by Abba’s Bjorn Ulvaeus and Benny Andersson. For this song, the wonderful 20-strong Guildford School of Acting choir joined Groban on stage. Quite a superb opening!

During the short intermission, we were also able to reflect on the utter brilliance of the sound and lighting engineers accompanying the show. First, sound engineer Mickey Beck’s immaculate use of the sound-desk not only perfectly captured Groban and Dearman’s beautiful baritone and soprano voices respectively, and the choir’s rich harmonies, but also Stephens’ piano and Akoni’s guitar, as well as Sean O’Loughlin’s wonderful orchestration of a group of local musicians performing as an ensemble for the first time. The decision by Groban and his team to use local talent is emblematic of his support for the development of arts education and performance. Bravo to that! Likewise, Mac Mosier’s grip of Bridgewater Hall’s lighting dynamics only served to enhance the vocals, with stunning use of colours and different technical arrangements of lighting. Both Beck and Mosier are long time members of Josh Groban’s team, and it tells (and these high standards were maintained throughout the second act).

The second act opened with the “Sweeney Todd Overture”, followed soon after by “Le Temps Des Cathedrales”, from Notre Dame de Paris, with more amazing guitar work from Tariqh (definitely, according to Groban, a “badass guitarist”), and which Groban dedicated to “the great people of France.” It was a lovely, and much appreciated, gesture. Dearman joined Groban once again to sing “If I Loved You”, the first of two songs from, in Groban’s summation, the “brilliant” Carousel.

It is so difficult to differentiate between amazing and incredible, but if choosing a couple of songs that raised the bar even further, then they are “Bring Him Home”, from Les Miserables, and “You’ll Never Walk Alone”, also from Carousel. “Bring Him Home” emphasised the range achieved by Josh Groban’s baritone voice. The softness Groban brought to the song deserved the standing ovation it received, and probably also led to a few teas being shed too. And the delicacy of Mark Stephen’s mastery of the piano was a joy to behold.

Bringing the show to an oh-so-premature end (after nearly two hours, it wasn’t premature all, but we could have stayed (danced?) all night, if permitted) was “You’ll Never Walk Alone”. Reminding us that it’s not a football (soccer) song at all, Groban invited the fantastic Guildford School of Acting choir back on to the stage for one more time. And they secured another standing ovation. Terrific stuff!

Josh Groban closed out the Manchester show with a song more famous for being taken from a film rather than a stage musical. The Wizard of Oz’s “Over The Rainbow” brought this spectacular show to an end – with another richly deserved standing ovation. In summary, Josh Groban is a genuine world-class performer, and a truly warm and nice person – and funny too. His grasp of the sometimes-strange English sense of humour is perfect. Perhaps he has some British genes? This was a truly fantastic evening, with some great songs from the stage delivered by a world-class performer and his multi- and super-talented team. It is also a credit to Groban and his team that they also entrusted significant parts of the performance to talented local musicians, as well as giving an opportunity to members of the high-quality Guildford School of Acting choir. A local trumpeter, Bill, also delivered a stellar performance with Groban singing ‘Old Devil Moon’, taken from Finian’s Rainbow (we also learned that Groban’s first lead role was in this musical, aged fifteen years). No doubt they all will cherish their contribution to this evening’s performance for years to come.

Josh Groban has announced a 2016 worldwide tour, taking in the United Stage, South Africa, Australia and New Zealand, and northern Europe, including the United Kingdom. More information can be found on: http://www.joshgroban.com.

Josh Groban is also a passionate support of arts and cultural awareness through education. More information about his foundation, which is focused on providing opportunities and experiences for young people, can be found at: http://findyourlightfoundation.org

Encore
Over the Rainbow