The Orpheum in Tampa’s Ybor City may be closing and moving soon, but that doesn’t stop them from being in some heavy hitters to make the most of the... 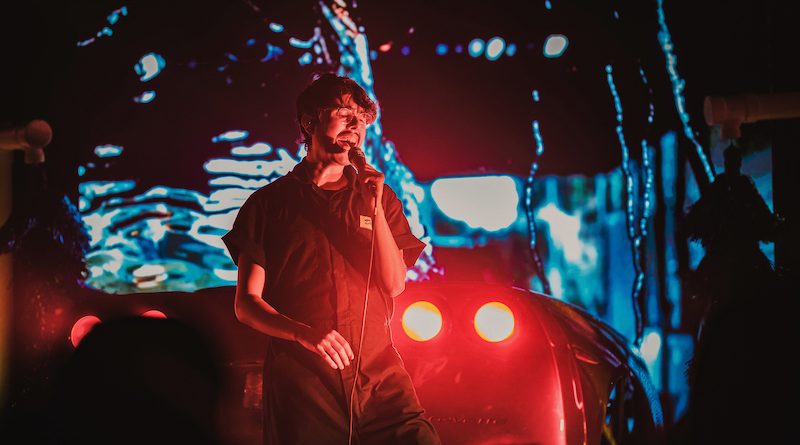 The Orpheum in Tampa’s Ybor City may be closing and moving soon, but that doesn’t stop them from being in some heavy hitters to make the most of the time they have left. On Sunday night, March 27th, American indie rock band Joywave was ending their Florida leg of The Cleanse Tour with joe P the right way: with a visit to Tampa.

With the lights set low, joe P and his accompanying bandmates emerged from the curtain to start off the set. As he began the transition into his first song, the lights suddenly kicked on with a blue hue glowing behind him. joe P danced across the stage, stepping back from the mic occasionally to rip on his guitar, while his bright orange cardigan would flow around him. It seemed tonight he needed no introduction, as several younger fans at the front of the crowd were already singing along and cheering out, from the beginning to end. joe P eventually ended his set, stepping off the stage, as a stage crew came out to set up for Joywave’s elaborate set.

Click here for photos of Joywave at 2021 Riot Fest in Chicago, IL in the QRO Concert Photo Gallery

Click here for photos of Joywave at Center Stage in Atlanta, GA on October 25th, 2018 in the QRO Concert Photo Gallery

Click here for photos of Joywave at 2018 Float Fest in San Marcos, TX in the QRO Concert Photo Gallery

Click here for photos of Joywave at Roseland Theater in Portland, OR on February 19th, 2016 in the QRO Concert Photo Gallery

Click here for photos of Joywave at Central Park SummerStage in New York, NY on June 24th, 2015 in the QRO Concert Photo Gallery

Click here for photos of Joywave at Terminal 5 in New York, NY on April 9th, 2015 in the QRO Concert Photo Gallery

Click here for photos of Joywave at Irving Plaza in New York, NY on October 8th, 2014 in the QRO Concert Photo Gallery

All the way from Rochester, New York, Joywave first got their start when lead vocalist Daniel Armbruster, guitarist Joseph Morinelli, and drummer Paul Brenner began playing together in several local bands. By 2010, the band formed together and found their name, and releasing their first mixtape 77777 the following year. In 2013, Joywave released single “Dangerous”, done in collaboration with Alan Wilkins of Big Data, a band Armbruster was formerly part of. In 2015, they released their most well-known and highly accredited album, How Do You Feel Now?, which featured some of their biggest hits. The band later released three more albums, with their most recent, Cleanse, being released just this February 11th. While on tour, the band is also accompanied by touring musicians Kevin Mahoney on bass guitar and Connor Ehman guitar and keys.

As the stage was finished being set up, Joywave appeared on the stage in their matching jumpsuits, quickly picking up their instruments to start the main show of the night. Getting straight into “Cyn City 2000” from their latest record, the lights kicked on as Armbruster moved across the stage, eyes wide as he sang into the mic. With a fake rear end of a corvette behind him, the stage was set up like a vaporwave road trip, with neon colors all around them and hypnotic graphics on the screen behind. The band then played “Buy American” from their newest album and “It’s a Trip!” from 2017’s Content. Throughout the set, Armbruster strutted back and forth across the stage, engaging with the crowd as they sang along with him, while lit aglow with a mix of red, blue, and purple. Off to the band’s right, a fan announced they were celebrating their birthday, to which Armbruster continuously checked to make sure he was enjoying the night throughout their set.

As their set neared its end, Armbruster stood in front of Brenner’s drum set as they transitioned between songs, while Morinelli leaned down low on the side of the stage and flashed a smile to the nearby fans. At one point Armbruster announced his top ranked cities of Florida, with Tampa being number one of course.

Rather than stepping off the stage to then inevitably come back for an encore, Armbruster announced that this was the time the crowd asked for an encore, and he assured them it was already opening. With that said, the band started the encore off with “Tongues” from How. They then played “Dangerous” from their collaboration with Alan Wilkins, which got the crowd up off their feet as they jumped and cheered. Ending their set, the band closed out with their top song “Destruction” from 2015, with every member of the audience singing along, while Armbruster’s voice rang out with each high note of the main chorus.

Finishing their set, the band bid farewell to the crowd, checking back in with the birthday fan, and stepping off stage as the house lights returned to normal. As Joywave exited, nearly half the crowd immediately flooded to the merch stand to grab a few memorabilia before heading home before the begin of the work week.

Cyn City 2000
Buy American
It’s a Trip!
Obsession
After Coffee
Every Window Is a Mirror
Coming Apart
Half Your Age
Traveling at the Speed of Light
The Inversion
F.E.A.R.
True Grit
Somebody New
Ugly Ending
Goodbye Tommy
We Are All We Need