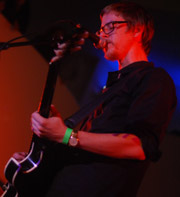 On the second day of Christmas, Matador Records gave a second tour date with JP.

The second date of the Julian Plenti European tour saw Plenti grace the shores of England as a solo artist.  The first date of two, the first in Manchester and the second in London on the 3rd of December, there was considerable excitement as England received its first taste of Skyscraper (QRO review) live.

The smallest of all the European venues, the 250-capacity venue is in the basement of the University of Manchester.  Although originally the date was scheduled for a larger venue on the Manchester Academy site, it was downsized at no complaint of the many fans who had come from close and afar, some local, some from the very north of the country, to even those who had come from abroad.

Plenti, like [his main band] Interpol (QRO album review), seems to attract a certain kind of fan.  The die hard, hardcore fan who will go to the ends of the earth to show a real kind of devotion – and although this is the first time Europe has sampled the delight of JP live, one is truly able to see why.

The atmosphere was intimate unlike any other.  Although the faster songs such as "Fun That We Have" and (America cover) "Horse With No Name" did reverberate with a fiery energy, it was by the far the slower songs that were truly accomplished.  Tracks such as "No Chance Survival" and "Madrid Song" were delivered with a real sense of sentiment, with the tenderness and beauty of the layered production of the songs really coming through, more so than on the record, …Is Skyscraper.

Although the atmosphere was somewhat romantic, it had to be ruined by one solo idiot who shouted not once, but three times for "Take You On a Cruise", a track of Antics, Interpol’s second album.  However, Plenti took it on the chin, simply stating after the second time, "No, we’re not going to play that."  Unfortunately, as stated by Banks himself post-show, this was the first time this has happened on the tour, and although it was evident such idiocy was to be expected when coming from one of the biggest musical imports from New York in recent years, it still did not make it right.

However, the crowd was indeed attentive with another audience member shouting "Paul, I love you in a weird way!" and Banks confusedly saying, "Wait, did he say in a weird way?", causing some giggles.  The quiet nature of the venue and crowd alongside the emphasis on the instrumental elements of the show gave a completely different feel from a typical show of what would be classed as ‘indie rock’, but even so, it was doubly as enchanting, almost reminiscent of a small jazz club atmosphere.

Plenti’s passion did not stop at the slower shanties.  With a rocking cover of the Pixies’ "Into the White" (QRO video of Pixies playing it), a b-side to the 1989 single "Here Comes Your Man", a new track "Goodbye Toronto" and lastly the single "Games For Days" to the end the show, the crowd was excited and eager for more.  It’s fair to say lucky are those who made it to the show, as on Plenti’s next return to the U.K., it’s not likely that he’ll play a venue so intimate, but things can only get better.  Julian Plenti is skyscraper; the sky’s the limit.

Click here for QRO’s review of Julian Plenti the night before at The Academy in Dublin, Ireland