Nobody does a catchy kiss-off quite like Juliana Hatfield.... 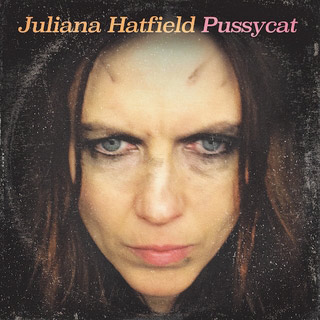 The Donald Trump campaign brought forth innumerable kiss-offs and takedowns from the left-of-center music world, and his election (put it in sarcastic quotes if you wish) has brought about even more. So it’s no surprise that singer/songwriter Juliana Hatfield is getting her digs in with Pussycat, even if the distance between the sharpness of the digs and catchiness of the pop songs is a shock.

Hatfield begins Pussycat with “I Wanna Be Your Disease”, and sweet sway about sickening Trump, and the record largely only gets more cutting & catchy after that. “Short-Fingered Man” gets right at his masculinity (to be fair, Homer Simpson has short fingers…), and “Rhinoceros” disgusting imagines what Melania has to go through with him in the bedroom – in a funny pop song. Relatively speaking, “Kellyanne” Conway gets off lightly in a song that at least sometimes wishes for better from her. Not so much Bill Cosby in “When You’re a Star” – though even that could be related back to our pussy-grabber-in-chief.

The anti-Trump material will get all the attention, but there are also some strong ‘regular’ Hatfield pieces. “You’re Breaking My Heart” is sweet, soft heartbreak, while “Touch You Again” is more a rocker of a break-up. Meanwhile, “Wonder Why” is a wonderful look back at childhood (a channel Hatfield successfully did in her nineties hit, “My Sister” – QRO video).

You don’t have to be a Trump voter to not want to listen to an album this vicious, and the attacks can get a little blatant and overdone. But nobody does a catchy kiss-off quite like Juliana Hatfield.