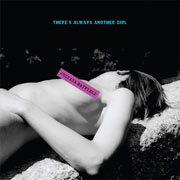 After 2008’s well-received How To Walk Away, Juliana Hatfield rebelled against having producers, and made last year’s Peace & Love all on her own, at home, but the more downbeat record didn’t receive the same kind of praise, leading the singer/songwriter to publicly talk (to QRO – QRO interview) about abandoning the music industry in favor of getting her masters.  But some sold-out gigs with long-time collaborator Evan Dando (QRO photos together) brought her back, and just as the internet taketh away from musicians in illegal file-sharing, it also giveth – Hatfield was able to raise all she needed & more to make another record via donations on Pledgemusic.com.  And she nicely mixes her styles on There’s Always Another Girl.

Hatfield has rockin’ moments, pretty alt-folk, sad singer/songstress, and even straight-up country on Girl.  "Taxicab" is a great rockin’ number, while "Candy Wrappers" is a fun piece that shows Hatfield doesn’t have to be weighty.  Indeed, Girl is best when she lightens up a bit, or least gets wry, such as in the otherwise wistful look back at "Change the World", neat little procession "Sex and Drugs", and kiss-off "Batteries".

Click here for photos of Juliana Hatfield, with Evan Dando, at Mercury Lounge in New York, NY on September 30th, 2010 in the QRO Concert Photo Gallery

Contrastingly, Hatfield can sometimes be too serious for her own good.  The single/title track was originally called "There’s Always Another Girl (Song for Lindsay Lohan)", in defense of the starlet & commentary on media fascination with her declining career, and what could be a some moving alt-folk is weighed down by the singer’s tendency to preach.  Similarly, darker attempt "Someone Else’s Problem" is too slogging, while "Vagabond" is too swaying.  But there is some nice out-and-out country in "Stray Kids" and "Wasting Time".

Doing everything on her own has worked better for Juliana Hatfield this time, though at fourteen tracks, There’s Always Another Girl could have used a bit of pruning ("Don’t Wanna Dance", "Failure", and "Thousands of Guitars" all feel like lesser versions of the song immediately before each, "Taxicab", "Stray Kids", and "Wasting Time", respectively).  But it’s a welcome continuation from an artist with a strong coterie of fans.