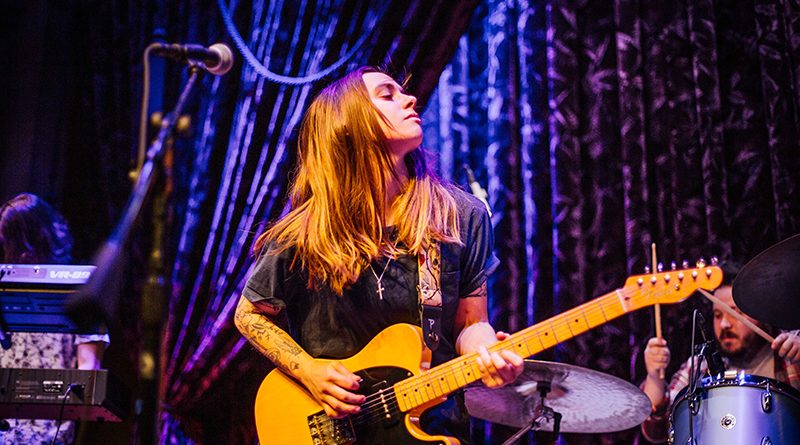 Click here for photos of Julien Baker at 2019 Primavera Sound in Barcelona, Spain in the QRO Concert Photo Gallery

Click here for photos of Julien Baker at Prospect Park Bandshell in Brooklyn, NY on July 25, 2018 in the QRO Concert Photo Gallery

Click here for photos of Julien Baker at 2018 Eaux Claires in Eau Claire, WI in the QRO Concert Photo Gallery

Click here for photos of Julien Baker at 2018 Boston Calling in Boston, MA in the QRO Concert Photo Gallery

Click here for photos of Julien Baker at 2016 Newport Folk Festival in Newport, RI in the QRO Concert Photo Gallery

For so many right now, your ‘breakout year’ has been all messed up. Whether it’s just losing your graduation or not getting to go to your big awards show, you might be big-time, but you’re just watching it on a screen in your bedroom. Even Joseph Biden, reaching the Oval Office goal he’d been trying for since 1988, had to have a socially distanced inauguration, with memorial flags instead of a crowd.

But there are those who are still making good of their great year, more than just an awkward Zoom appearance, like Julien Baker. Her new record Little Oblivions (QRO review) is already a contender for album of the year (and everyone’s even more obsessed about her super-trio boygenius with Phoebe Bridgers & Lucy Dacus, despite just an EP & some demos to their name). Hopefully one day soon she’ll be able to do the big new record tour that COVID has denied her, but she was able to pull off a powerful record release livestream on Thursday, March 26th via Audiotree.

One aspect that made the whole thing feel a little bit more like the before times that we all want back was that Baker brought an honest-to-god opener, Mini Trees, who charmed the chat with their touching indie-pop. Admittedly, the chat was very much up for being charmed, full of Baker super-fans gushing over her and each other. An unheralded aspect of livestreams is the chat function, where you can not only connect with people around the world, but also talk about the music being played while not talking over the band (or shout against the volume). Consistently chat rooms have been wells of positivity, because these are the people who paid to see the show, not the drive-by trolls of social media. The chat even opened up a half-hour before the show was to start, so people could shout out their hometowns, even ask, “Are my fellow lesbians here?!?” (yes, there were a bunch there…)

Of course, most livestreams lack any live audience (and this performance was actually pre-recorded), so Baker herself couldn’t joke with the crowd, and like many livestream players these days, definitely felt a little awkward with the whole thing (“Hello… stream?…”). Indeed, she introduced her band way early (forgetting to tune while she did), as it was kind of the only thing she could talk about, with Calvin Lauber on bass, Mariah Schneider guitar, Matthew Gene Gilliam drums, and Noah Forbes keys.

But all awkwardness that didn’t show in her powerful songs. Showcasing Oblivions, Baker opened on keyboard with a bigger live version of the resigned “Faith Healer” (QRO review), before picking up her guitar for the more conversational “Heatwave”. Songs like “Faith Healer” and fellow single “Favor” (QRO review) grew from their softer album deliveries into epic calls live. Even quieter pieces such as “Relative Fiction” and “Highlight Reel” had bigger moments – indeed, pretty much every number had a giant moment where the chat would go nuts.

The set also included two songs not from Oblivions, playing back-to-back “Turn Out the Lights” (off the 2017 LP of the same name) and 2019 non-album single “Tokyo”. Yes, there were jokes about the latter vs. Bridgers’ “Kyoto” (including demanding Dacus write “Osaka” or something…). “Lights” had its own quiet intimacy into epic call, as did “Tokyo”, with particularly excited chat fans getting to hear the unexpected.

There was a significant “mood shift,” as Baker herself described it, when she went solo on the piano for the heartbreaking “Song In E” (“That’s what it was called in my voice memos, and I couldn’t come up with a better name for it…”). The searing emotion of “Hardline” (QRO review) had the chat demanding that people write “JUMP” at the breakdowns, and then “Ziptie” closed the performance out by mixing stark, stripped emotion and full-on long-hair head-bang.

Fingers are still crossed that live music will be coming back to the people this fall, maybe even outdoors this summer. Until then, our COVID era breakout musicians can showcase just why they broke out, just why you can’t wait to see them live, on your own screen.

Grouplove – “This Is The End”