There is no question about it, 2013 has been yet another ‘quite the year’ for Justin Timberlake.... 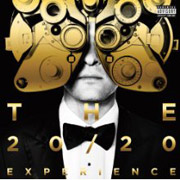 There is no question about it, 2013 has been yet another ‘quite the year’ for Justin Timberlake.  Not only did it see his return to studio album making after a seven year break, but he has inundated the general public with not one, but two new studio albums.  That word, “inundated” can carry with it either positive or negative connotations.  “Which is it?” you’re probably wondering.  Well, that’s the reason this review goes on.

After the first part of The 20/20 Experience dropped (QRO review), and leading up to the release of 2 of 2, there were several passing comments made to the effect that the second installment consisted of outtakes from the first half’s sessions as well as some new material.  That’s basically a fancy way of saying this is a b-sides album.  Whether or not 2 of 2 is ‘officially’ a b-sides album remains a bit unclear, but it definitely feels like a b-sides album.  It’s a tad messy and unfocused when compared to 1 of 2.

Before you throw in the towel on reading any further, hang on.  Think back to when you first listened to The 20/20 Experience 1 of 2.  You may have found yourself amazed at the focus, craft, care, depth, and layering (to name a few things) that clearly went into every song on that album.  With 2 of 2 you will find yourself noticing the repetition halfway through the second song, “True Blood”.  Simply put, that song should have been three, maybe four minutes long, period.  But nine and a half?  It quickly leaves the territory of cool and starts to border on annoying by the end.  What happened here?  Is Timberlake trying to drain every possible ounce of milk out of the proverbial teat or does he truly believe down in the depths of his soul that this installment is as good as the first?  He demonstrated how a long track could be a good thing with the song “Pusher Love Girl” from 1 of 2, and “True Blood” just isn’t the same.

There’s a rather comical moment on “Murder” when Jay-Z raps about how Yoko Ono’s p***y being the thing that broke up the Beatles.

Don’t fret, there are a couple of high points on 2 of 2 that are mostly good enough to hang with the tracks on 1 of 2.  The first is the lead single “Take Back the Night”.  Everything about this song is a celebration of Michael Jackson and that is something that Justin Timberlake has demonstrated he is skilled at.  Perhaps whoever makes the decision about these things knew it was the album’s strongest track and that’s why the decision was made to push it so hard.  However, even this song isn’t exempt from the repetitive feel that is so prevalent on 2 of 2.  The next high point of the album is the song “Drink You Away”.  It’s an example of how the acoustic guitar is tastefully used throughout 2 of 2 (also see the two songs that make up the last track “Not A Bad Thing”) and helps give it a fresh feel.

Perhaps it would have been better if the order of these two albums had been reversed.  The songs that make up 2 of 2 are good enough that would they have been the forerunners they would have had people sufficiently stoked.  Had the tracks that made up 1 of 2 been the follow up material then boy howdy would that have finished the musical year with a bang.

Justin Timberlake – Drink You Away