While in England during the pandemic, Drew pulled up the Endlesss music-making app and crafted his own instrumental electronic record, 'Influences'.... 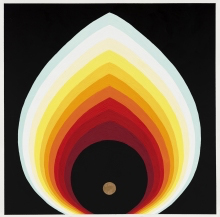 While we all know Kevin Drew as the frontman for Canadian alt-rock collective Broken Social Scene, his musical interests vary widely. He teamed up with sixties Archies singer Andy Kim for 2015’s It’s Decided (QRO review). He recruited The Sea & Cake/Tortoise’s John McEntire for BSS’ Forgiveness Rock Record (QRO review). And pretty much everyone in the Scene also has another band. While in England during the pandemic, Drew pulled up the Endlesss music-making app and crafted his own instrumental electronic record, Influences, as K.D.A.P. (a.k.a. Kevin Drew A Picture).

Click here for photos of Kevin Drew at 2014 Field Trip Festival in Toronto, ON, Canada in the QRO Concert Photo Gallery

First things first, this is an instrumental album, less his solo release Darlings (QRO review) and more the post-rock of fellow Scenester Charles Spearin’s Do Make Say Think. The electronic effects throughout are decidedly airier, reflecting the English countryside that it was made in. And while it naturally runs together as a mood record whole (particularly the extended sum-up closer “Almost Victory (Keep End Going)”), there are pieces tinged with sadness such as opener “The Slinfold Loop” and “Wilner’s Parade”, while “Explosive Lip Balm” is, yes, more explosive.

Even as the coronavirus is (hopefully) receding (Delta variant & anti-vaxxers notwithstanding…), and we all want to go to big concerts surrounded by sweaty fans, there is still time to take your self-contemplative walk in the wilderness. And Kevin Drew A Pretty good soundtrack for it.