<img src="http://www.qromag.com/wp-content/uploads/2011/08/kanrocksas11d1.jpg" alt="Kanrocksas : Day One" />The likes of Eminem, Flaming Lips, and much more were featured on Day One of the inaugural Kanrocksas Music Festival. ... 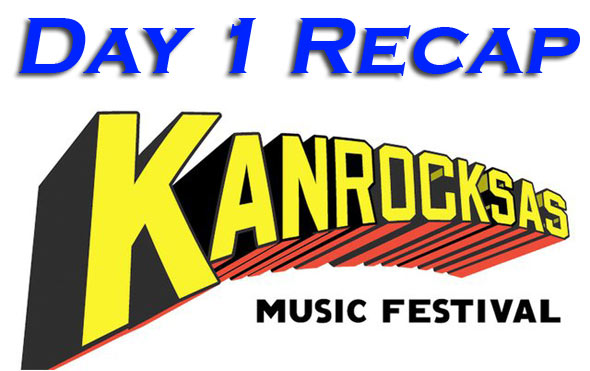 There was light rain on the Great Plains but no one really seemed to mind.In fact, it was apparent that most of the festivalgoers on Friday, August 5th, Day One of the inaugural Kanrocksas Music Festival at the Kansas Speedway in Kansas City, KS, were just happy to see a break from the scorching heat.Temperatures in the week leading up to the festival were regularly breaking three digits, and that can make for a sticky festival.

The gates opened and the first of the 30,000 spilled out onto the immense speedway infield.The transformation of this overgrown Hot Wheel track into a world-class festival ground was truly a sight to behold.In the place of campers and pit crews there were four main venues.The Critical Mass DJ Tent was set to house a lineup that boasts such names as Major Lazer and Kaskade.Two auxiliary stages were preparing to host festival mainstays like Flaming Lips, and relative newcomers like Ellie Goulding.For a first year festival, the lineup at Kanrocksas is nothing short of flabbergasting.

The relief from the heat didn’t last long, as by the time the first acts hit the stage, even the sun wanted to get in on the action as is pushed it’s way through the clouds to catch a glimpse of the biggest festival to hit the Land of Oz since Wakarusa (QRO photos from last year in Kansas).

Maybe it was because of the heat, or the relatively early time-slot, but the crowd really didn’t seem to be too into UME.However, you wouldn’t have been able to tell by watching the Texas trio’s energetic set.From the first lick, it was all flaying blond hair, flailing arms and flying crunchy guitar.Comparisons to Metric (QRO live review) are not far off base, and not just because of the lead singers golden locks.UME goes hard, but can still pull back and croon out a catchy hook.Unfortunately, the time slot/heat combination did them no favors.The set was so short (30 minutes), that by the time the crowd warmed up to the trio, it was time to shift attentions across the infield to Fitz and the Tantrums.

Fitz and the Tantrums

Michael Fitzgerald and co. came out of the gate swinging.L.A.’s Fitz and the Tantrums special blend of funky neo-soul-meets-indie-pop turned out to be the perfect elixir for the mid-afternoon heat.The set included a cover of the Raconteurs’ “Steady as She Goes” and The Eurhythmics’ “Sweet Dreams”.Both took exceptionally well to the Fitz treatment, and had the crowd out of the funk and into the groove.Fitzgerald and fellow vocalist Noelle Scaggs were absolutely electric.They have obvious chemistry, and are great performers.Scaggs shook her tambourine like it was a comfy 75 degrees, despite temps reaching 90. 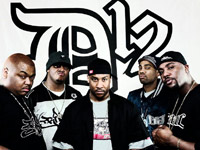 Over on Stageasaurus Rex, D12 drew the biggest crowd of the afternoon.The Dirty Dozen blasted their hard-hitting beats and the crowd hit back just as hard.The set was nothing special as far as hip-hop sets go, but it didn’t faze the crowd.It was quite obvious that the day’s headliner, Eminem (see below), was a huge draw on Day One, and those faithful fans of Marshal Mathers were pretty amped to see his boys from Detroit that afternoon.

Back on the Main Stage, Sheffield’s Arctic Monkeys fuzzed out a set that would make and English rocker proud.Alex Turner’s band of disaffected men has mastered the art of looking bored while playing not-bored music.Seriously, they have mastered the art.What they lack in overt stage presence and crowd interaction they make up for with their music.

The music was what it was all about.”We don’t have too long up here so I’m gonna talk as little as possible and we’ll play as much as possible,” was Turner’s introduction to the crowd. 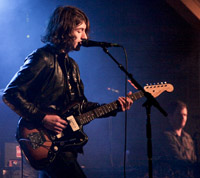 The Monkeys played a set that spanned all four of their albums (QRO most recent album review).New single “Don’t Sit Down Cause I’ve Moved Your Chair” was like a dirge to a fall down a rabbit hole, and newer single “The Hellcat Spangled Shalalala” showcased how far the band has come since the days of Whatever People Say I Am, That’s What I Am Not.The energy and basic formula remains the same, but Turner’s lyrics have become a true highlight of the band.He really is an amazing vocalist, and a lyrical ninja.

By far the biggest crowd of the day so far, Kid Cudi played a set that was heavy on his new material.Cudder really is serious about this whole rock star thing.As of late, the man that made his name with innovative and fun hip-hop has been straying more and more towards rock ‘n’ roll.Even going so far as to include Jimmi Hendrix covers in some of his sets.Although Kanrocksas didn’t get any Kid Hendrix, we did get a lot of power chords and muddying distortion that often drowned out what makes Cudi Cudi, those gruffy-yet-smooth vocal chords that take a good hook and make it great. 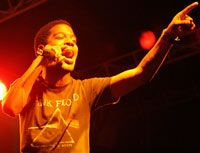 Cudder seemed genuinely surprised by the turnout for his set, and it put him in a visibly good mood.He channeled the energy the crowd gave him right back out, and played a good 15 minutes over his time slot.

My first trip over to the Critical Mass DJ Tent was by far the best experience of the day.Diplo, Switch and Major Lazer crew descended on America’s breadbasket bearing gifts of Jamaican dancehall beats so fine they blew the shirts off of everyone in the DJ tent.Their hype man and dancer, whose names I have unfortunately been unable to track down, left so much sweat on the stage Kaskade’s gear was probably soaked by the time he got up there. 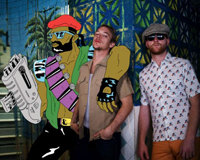 Against a backing of video boards, and a mad decent light show, the crowd went absolutely ape-shit when the always-recognizable snare and kick of”Pon de Floor” made its way into the mix.The bass was so loud it rattled the esophagus.All the hits were brought in eventually, including “Hold the Line”, “Sound of Siren” and even some brand new material.

For the last two tracks in the set, Diplo demanded that the stage be filled with girls, and the lady Kanrockers were more than happy to oblige, much to the chagrin of security.When the set ended and all heart rates had dropped back down to a normal level, everyone knew that guns don’t kill people, lazers do.

The bad news for Illinois boy Kaskade was that Major Lazer nearly drained the crowd of their energy.The good news for the international DJ was that reinforcements arrived as soon as the disco-fresh beat came steamrolling out of those woofers.

And what a fresh beat it was.The clean crisp stylings of Kaskade seemed absolutely feather light compared to the downright dingy stank of Major Lazer (those are all terms of endearment, by the way…).The set, as is usually the case in a DJ tent, turned into an epic dance party, and it seemed as though we might have been transported to Ibiza by some cosmic Kaskade magic.

Click here for photos of Flaming Lips at Nikon at Jones Beach Theater in Wantagh, NY one week prior in the QRO Concert Photo Gallery

Click here for photos of Flaming Lips at 2011 Sasquatch! Music Festival in George, WA in the QRO Concert Photo Gallery

Click here for photos of Flaming Lips at 2011 Primavera Sound Festival in Barcelona, Spain in the QRO Concert Photo Gallery

Click here for photos of Flaming Lips at Jannus Landing in St. Petersburg, FL on October 13th, 2010 in the QRO Concert Photo Gallery 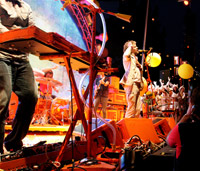 I hightailed it over to Stageasaurus Rex to catch the always-entertaining Flaming Lips.The band really latched onto the whole ‘Land of Oz’ thing.Each side of the stage was inhabited by about 25 dancing Dorothy’s with the cowardly lion, the tin man and the scarecrow all mixed in.The band had all the usual props, giant hands, confetti cannons, fog machines, massive disco ball, laser lights for the giant hands, et cetera.All of it set in front of a really magnificent half-circle video board.

Click here for photos of Flaming Lips at Chastain Park in Atlanta, GA on August 26th, 2009 in the QRO Concert Photo Gallery

Click here for photos of Flaming Lips at 2009 Pitchfork Music Festival in Chicago, IL in the QRO Concert Photo Gallery

Click here for photos of Flaming Lips at 2008 Wakarusa Music Festival in Lawrence, KS in the QRO Concert Photo Gallery

Click here for QRO’s review of Flaming Lips at Bank of America Pavilion in Boston, MA in 2006

A particularly quirky special effect was the small camera mounted on Coyne’s mic.The feed from the camera was usually played on the half-disc video board, providing wonderful shots of the nose and nostrils of Coyne.

Coyne was his usual f-bomb loving self, and was sure to inform the crowd that just prior to taking the stage, he was informed by the speedway officials that for the Flaming Lips set only, everyone was allowed to smoke as much pot as they wanted.Of course, Wayne, of course. 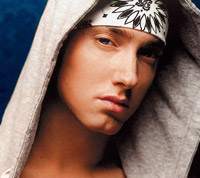 As the night came to a close and the heat finally began to dissipate, it was time for the day’s headliner.As I said before, it was clear from the number of Recovery Tour shirts in the crowd the Shady was the big draw today.From the looks of it, all 30,000 festivalgoers were present and accounted for at the main stage for Marshall Mathers.

Eminem played with a band rather than just a DJ, although of course there was a turntable present.The crowd was ecstatic to see one of the most successful rappers of all time grace the stage, and sang along to every line.

Click here for photos of Eminem one week prior at Osheaga Music Festival in Montreal, PQ, Canada in the QRO Concert Photo Gallery

Slim played an eclectic set, including music from all his albums, a D12 (see above) track or two, and a long, multiple track tribute to late R&B legend and close friend Nate Dogg.Highlights included “Lighters” and “Airplanes Pt. 2”, which Em seemed particularly happy about performing.He saved the best for last when he came back onstage for an encore performance of “Lose Yourself”.The masses did, in fact, lose themselves.