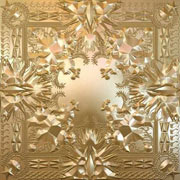 Kanye West and Jay-Z are very, very rich.  Like, toilets with priceless artwork hanging over them, “last week I was in my other, other Benz” rich.  So it makes sense that when their powers combine on the long threatened collabo Watch The Throne, what you get is a record that’s as lavish as the elaborate, gold plated, rococo album art that embellishes it.  Just take note of the high profile, high dollar samples Yeezy and his team of superhuman producers get to chop up.  Otis Redding, James Brown, and Curtis Mayfield – sampling these legends does not come cheaply.

West plays some part in the production of every track, but he brings in nearly all of his famous friends to share the workload.  88-keys, Q-tip, The Neptunes, Swizz Beats, RZA, and Pete Rock all have their stamp on at least one track, and it gives the album a dearth of diversity.  Even mid-track things can take abrupt, almost plot derailing twists, with “Niggas in Paris” somehow managing to survive a sudden drop into dubstep and cheesy Will Ferrell samples and make it out the other side without completely disintegrating.  Dubstep comes back in the appropriately abrasive “Who Gon Stop Me” where West is at his controversial best with the hook, “This is somethin’ like the Holocaust / Millions of our people lost / Bow our heads and pray to the Lord / ‘Til I die I’m a fuckin’ boss.”

Most of the album grants either West or Jay-Z the mic for at least the majority of a verse, but in “Gotta Have It”, Yeezy and Hova trade sometimes goofy, always playful rhymes in a back and forth that exposes the honest to goodness chemistry that the two have when sharing a studio.

There’s even soulful hip-hop, something that it might have seemed West abandoned long ago.  But his gospel-rap tendencies re-emerge with the “Try a Little Tenderness”-sampling “Otis”.  Mr. Redding’s vocals are chopped down to just a few grunts and growls, and Jay + ‘Ye swing around the beat with more expensive playground rhymes, “Sophisticated ignorance / Write my curses in cursive.”  Continuing on that soulful groove, the deluxe edition of Watch The Throne (as if it wasn’t deluxe enough already) features a leftover from the G.O.O.D. Fridays sessions with the Pete Rock produced track “The Joy”.  ‘Soulful’ really isn’t a strong enough word for this swaying, drooping, absolutely hood track stitched together from Curtis Mayfield’s “The Makings of You” and Syl Johnson’s “Different Strokes”.  Here are found the most relatable moments on the album, as West and Jay-Z reminisce about things other than their obscene wealth.  West muses, “I never understood planned parenthood / Cuz I never met nobody planned to be a parent in the hood,” while Jay gives us a vintage verse, “This is my momma’s shit / I used to hear this through the walls in the hood when I was back in my pajama shit / Afros and marijuana sticks / Seeds in the ganja had it poppin’ like the sample that I’m rhyming with.”

The album is quite literally too big to fail.  Two MC’s at the top of the game with nothing left to prove get to play with the best toys, beats, and highest dollar production around.  Yes, they’re flaunting their wealth during a time when the country is not exactly able to do the same, but the genuine quality and enjoyment factor of this record cannot be doubted.  Hate them if it’s necessary, but it cannot be doubted that Kanye West & Jay-Z make great hip-hop.

MP3 Stream: “Gotta Have It”