Karen O & The Kids : Where the Wild Things Are Soundtrack 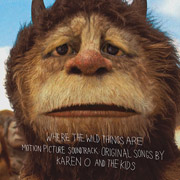 When filmmaker Spike Jonze (Being John Malkovich, Adaptation) took on the project of making a feature film adaptation of children’s story Where the Wild Things Are, he had a lot of difficulties in his path: the natural backlash to anyone doing anything to the beloved tale, comparisons to the classic animated short, turning a ten-sentence story into a feature-length movie, etc.  There’s a reason Where the Wild Things Are has been in development hell for years & years.  But one rather easier decision was who to do the soundtrack, as he tapped ex-girlfriend/Yeah Yeah Yeahs (QRO album review) frontwoman Karen O, whose put together a soundtrack that nicely exemplifies the kid-wonder aspects of the classic story.

Like any ‘real’ soundtrack (i.e., not just a collection of songs that you may have heard snippets of in the movie – looking at you, Garden State – but all material composed by one musician specifically for the movie), Where the Wild Things Are Soundtrack isn’t really a ‘full’ album, but background-y instrumentals-ish tracks, with some sound clips from the movie & a few ‘real’ songs interspersed.  But the sound clips aren’t that many (perhaps because the movie is naturally heavy on visuals & light on dialogue, thanks to the source material), and while the background-ish tracks include some background-ish vocals, the ‘real’ songs don’t rely on vocals that heavily, letting the whole soundtrack feel more ‘whole’.

But there are still a few tracks that standout, starting with second song & single "All Is Love", which nicely captures a kid-like catchy, bright nature, and second-to-last song "Food Is Still Hot" is an enjoyable pseudo-reprise of "Love".  "Rumpus" is even more in that nature, but the more background-like piece is mostly memorable for the opening sound clip from the movie, "Let the wild rumpus start!".  Only two tracks really don’t feel like ‘kid’s material’, "Capsize" and "Hidaway".  "Capsize" is the most Yeah Yeah Yeahs-y piece on Where the Wild Things Are, with Karen O’s vocals and the dance-sharp beat both clearly reminiscent of "Y Control", albeit without the distortion.  "Hidaway", meanwhile, is a stripped, sad strum & harmony.

Early leaks of Jonze’s Where the Wild Things Are have received mixed reviews at best, but those were largely unfinished material, and the most prominent word on the final project is that it’s truly ‘Jonze’s vision’.  Whether such a short children’s story can be made into a film story is still a question, but the visuals that have been seen have certainly been stunning.  Karen O’s soundtrack won’t bowl you over like those, but softly settle you downward like the story did when you were a kid, and hopefully how Jonze’s movie will in theaters.