On a typical English cold and frosty autumnal day, Tom Meighan and Chris Edwards, of U.K. band Kasabian, met up with QRO.... 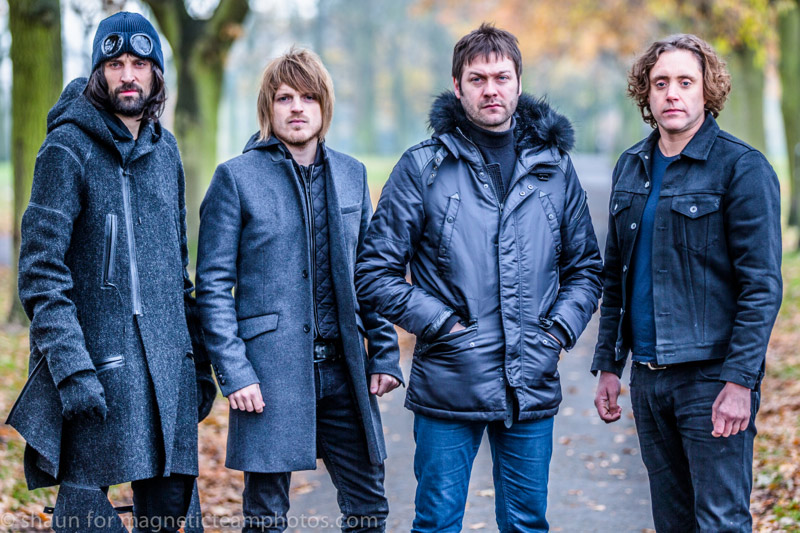 On a typical English cold and frosty autumnal day, Tom Meighan and Chris Edwards, of U.K. band Kasabian, met up with QRO.  Announcing a 35,000 capacity gig in their hometown of Leicester on the Summer Solstice (Saturday, 21 June), Tom and Chris also spoke of the excitement of playing live and their new record, due out next year.

Kasabian are one of the great live U.K. bands – with a string of headlining performances behind them, and enough music business awards to fill a cabinet or two.  Three of the four members met at school in the provincial city of Leicester, in the Midlands region of England.  They got together as a band in the 1990s, and have four huge albums in their locker – self titled Kasabian, Empire, West Ryder Pauper Lunatic Asylum and Velociraptor!  The recording of their fifth album is underway, and there are plans for a 2014 tour too…

Chris Edwards: And there’s going to be lots of friends, lots of family.  There’ll be a massive guest list – all wanting to be at the front.

QRO: I’ve seen you live, and it’s an awesome experience.  One of the things you do brilliantly is connect with your audience.

TM: To be honest, it’s the connection we have with people.  The music’s a unity.  We are one of the few bands around that are doing that.  It’s a wonderful thing.

CE: A lot of gigs have gone into that input.  We’ve played thousands of gigs; so you learn, you craft, and you know how to create an atmosphere.

You never see us just picking up the paycheck and walking out. We just love playing live.

TM: We’ve developed as a band and we’ve got better.  We learn new stuff every day.

CE: We write music that we like.  And I think the crowd gets a buzz from that, that we make music we like, so they like it too; they’re in the same headspace as us.  And they know they’re going to have a good time, and we give them 100% at every gig because we love doing it.  You never see us just picking up the paycheck and walking out.  We just love playing live.

QRO: And the stage design is great, with attention to sound and visuals…

TM: Yeah, the most important thing is how we grasp people.  We’re an energy; we lift people up.  We’ve just got that thing where people can feel it in their nervous system – we are a musical drug.  You start off, you take it, and then you’re with us throughout the whole set.  If we’ve gone to support a band in Europe, sometimes the crowd will be new to our music but, by the end of the gig, they’re just going mad for us.  We always get them in the end.  As a band, we’re still the number one boxer in the ring, you know.  We’ve been around for fifteen years, and we’ve got five knockout albums now, so we’re doing all right.

QRO: Tell me about recording your new album in the studio…

TM: It’s going well.  Our vision is to produce rock and roll for the 21st century.  We sound brand new; we sound fresh again.

QRO: You love big songs with choruses where people can join in and sing along.  Can you tell me about the new sound?

CE: There are some proper anthems there.

TM: And plenty of singsongs.

We’ve just got that thing where people can feel it in their nervous system – we are a musical drug.

TM: And Spike’s mixing it [Mike ‘Spike’ Stent, mixing engineer] with them.

CE: And Steve McLaughlin is engineering it.  Steve is well known for his work on movie soundtracks, and has Hollywood experience.

QRO: Are you interested in writing a film soundtrack?

TM: Our music gets picked up anyway – for films and sports events.

QRO: Have you any plans to tour the rest of the U.K., Europe and North America?

TM: Yeah, that will happen.  We start rehearsals for our live shows in February 2014.

QRO: You’ve got a big following in North America.  Have you a message for those guys?

CE: Tell them we haven’t forgotten them.  We’ve done a lot of touring in America, both the East and West Coasts.  We were all right.  We can hold our own there.

QRO: Thank you for taking time out of the studio to chat with QRO.