The poignant question at the heart of one of the year's most interesting albums is merely a prelude to a barrage of emotionality, both vivid and genuine.<span>  </span> ... 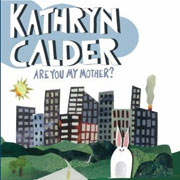 Are you my mother?  The poignant question at the heart of one of the year’s most interesting albums is merely a prelude to a barrage of emotionality, both vivid and genuine.

Considering her time with Immaculate Machine (QRO live review), a hectic recording/touring schedule with The New Pornographers (QRO live review), and her many cameos and guest appearances, the fact that Kathryn Calder would even have time to write material for an album of her own is impressive in its own right.  In even its opening seconds though, the admirable mixture of pop presence and uplifting sentimentality on the British Columbia native’s debut are representative of much more than a simple side project.

Are You My Mother? begins on the atmospheric piano track “Slip Away” – the soft, echoic quality of which is characteristic for the best bits of the album.  While there are moments of build-up to be had, urgency is better suited to the softer, more introspective tracks early on.  “Low” and “So Easily” are prime examples – the former basking in vintage piano prowess, with both songs containing some of the most haunting and contemplative gang vocals ever to be recorded.

The somewhat dark, entirely personal nature of the album stems from two years the singer spent caring for her terminally ill mother.  With the sentimentality of her words and the intensity of her stories in mind, you find yourself immersed in fragments of fleeting memories, while walking along with Kathryn on the shaky ground that marks the present.  While this may paint a bleak picture, there are indeed some bright moments to be had.  In Calder’s own words, the album is not a eulogy, but rather a statement that life is a mixed bag, and that without losing things you would never know to cherish them.

In fact, losing some restraint late in the album leads to a powerful set of songs, perhaps those most deserving of cherishment.  The soft singer takes it up a notch on highlights “Down The River” and “A Day Long Past Its Prime”, before going out in the same light on closer “All It Is”.

Calder’s interesting technique, overpowering emotionality, and haunting allure prove to be a musical force to be reckoned with, and her debut really leads the mind to wonder what’s next.  Regardless of the answer, Are You My Mother? marks the first of what we can only hope to be many such radiant offerings.