While it may not be something to meditate to, most listeners shouldn't have a problem dancing up a storm to 'Teenage Dream'.... 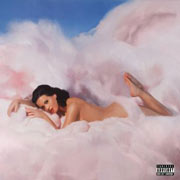 It doesn’t matter if you went to high school in Manhattan or Moncton, in 2008 or 1982 – regardless of where, when, or even how you spent your mandatory four-year sentence, each and every one of us can attest to the existence of one very unique sort of girl.  She was beyond beautiful but still stopped to talk to you in the hallways, made being well-read look extraordinarily underrated, and dated the only guy in the world who you couldn’t hate for it.  Regardless of how relatively rare this mysterious breed of person may be, the theme behind her seems to have become very oddly universal; so universal, in fact, that one the world’s best known examples has embodied the idea in her latest, very appropriately titled LP, Teenage Dream.

Much like its real-life counterpart, Katy Perry’s music strays far from the indie crowd and the hipster scene, while still managing to play well off of both.  The early goings of the Californian’s first album since 2008 breakout One Of The Boys is laden with extraordinary pop hooks and vibrant energy – characteristics that are wholly enjoyable despite lyrics like: “I smell like a mini-bar / DJ’s passed out in the yard / Barbie’s on the barbeque / Is this a hickey or a bruise?”  While much of the album revolves around a similar sort of subject matter, Perry actually does well to impress in spite of it.

Click here for photos of Katy Perry at Carnegie Hall in New York, NY on November 4th, 2015 in the QRO Concert Photo Gallery

The album has its low points, sure – absolutely ridiculous song “Peacock”, for one.  That said, it’s most definitely not without its high points either.  The vocals and rare string arrangements on “Fireworks” are enough to make anyone swoon, while “Pearl” embodies a kind of ‘80s electronic atmosphere, not unlike Depeche Mode.  As Perry’s most recent endeavour rolls onto fun loving, Snoop Dogg (QRO photos)-featured number, “California Gurlz”, as well as a counter opposite in down to earth closer “Not Like The Movies”, it becomes clear that good does indeed triumph evil on this hour-long affair.

Ultimately, Teenage Dream isn’t a breakthrough concept album or a wholly serious record.  The lyrical subject matter is a bit too much to take at times, and the synth and effects overdone at others.  Despite this, Perry’s raw vocal talents and the overall heartening nature of her third album are enough to overcome any of that negativity.  While it may not be something to meditate to, most listeners shouldn’t have a problem dancing up a storm to Teenage Dream.

The Walkmen : Live in the U.K.