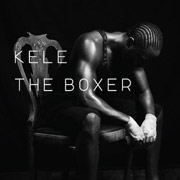 Remember Bloc Party?  Some time between The Strokes’ indie-break-out of 2001 and the Canadian indie invasion of 2004/2005, the alternative music world was swamped by indie-hits from that most reliable of indie-sources, Great Britain, and among them was Bloc Party with Silent Alarm.  Yet after that, the band only declined, first with the mixed bag that was 2007’s A Weekend In the City (QRO review) and then decidedly downward with 2008’s Intimacy (QRO review), as they completed the unfortunate trade-in of angular indie-guitars for overdone techtronica.  Well, now Bloc Party frontman Kele Okereke has gone out on his own, under just ‘Kele’, with his solo debut The Boxer – and the legacy of Bloc Party is taken yet another step down.

One of the biggest problems with Intimacy was not just the switch to ‘tronica, but when Bloc Party indulged in the harder side of that sound, and Kele indulges in it even more so on opener “Walk Tall”.  Between the grating & lame hard tech-stop and the chorus of “I don’t know what you’ve been told”, it’s not only not what Kele should be doing – it’s not what anyone should be doing.  I don’t know what Kele’s been told, but “Walk Tall” will frankly make all but the most persevering listener stop the record right there and not listen to another note ever again.

Click here for photos of Kele at 2022 Just Like Heaven in Pasadena, CA in the QRO Concert Photo Gallery

Click here for photos of Kele at Webster Hall in New York, NY on September 8th, 2010 in the QRO Concert Photo Gallery

Thankfully, relatively speaking, the rest of The Boxer doesn’t have that off-putting (to put it mildly) aggression, but still goes the electronica route that failed in Intimacy, only with little of whatever you once liked about Bloc Party (seems guitarist Russell Lissack was the most important member of the band…).  Much of the rest of The Boxer is either forgettable dancetronica that you might have found on some electronica compilation from the early nineties (such as early pieces “On the Lam”, “Tenderoni” or “The Other Side”), or a distant sound that has had all relevance or importance drained from it (such as later pieces “The New Rules”, “Unholy Thought”, or “All Things I Could Never Say”).  Occasionally there are hints of the Bloc Party you used to love in Kele’s vocals, most notably with middle track “Everything You Wanted”, but then the songs inexplicably get electronically mashed-up, like it’s the unnecessary remix of a Bloc Party song you liked (and this is the band who released a whole album of remixes, Intimacy Remixed – QRO review).

The wave of British indie music in 2003-ish didn’t hit as hard as the reintroduction of alternative music to the mainstream in 2001, or as the growth of collectives in 2005, but produced a lot of alternative-ish bands that you can remember liking back then – but was it just because they were new and seemed alternative?  How often to you listen to Silent Alarm anymore, anyway?  Like The Arctic Monkeys or The Kaiser Chiefs, Bloc Party was kind of in the right place at the right time back then, but not only has that time passed them by, but the band has seemingly run in the opposite direction, making it all worse.  And now Kele Okereke has gone solo, and somehow managed to make things even worse than that.

Scott Devendorf of The National