Darlings is Kevin Drew stripped down and bare, for the whole world to see and feel.... 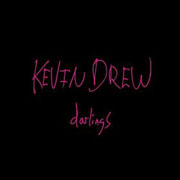 When ‘Broken Social Scene Presents: Kevin Drew’s Spirit If…’ (QRO review) came out back in 2007, one couldn’t help but wonder why, exactly, the BSS (QRO spotlight on) frontman felt the need to couch the album with the long prefix – he’s “the jefe of BSS,” as put by fellow Scenester (but sideman) Andrew Whiteman (QRO interview), so either call it a BSS record or do it fully solo.  Spirit If… was a Broken Social Scene record, another strong one, before BSS’s Brendan Canning (QRO interview then) did the ‘Broken Social Scene Presents’ thing with Something For All of Us… (QRO review), and then a ‘regular’ BSS album, Forgiveness Rock Record (QRO review).

However, since wrapping up touring Forgiveness, the various members of the Toronto indie-rock collective have been doing other things, like the truly solo You Gots 2 Chill (QRO review) from Canning (QRO interview now), and so Drew goes fully solo with Darlings, a restrained a chill version of the Canadian alt-star.

It’s also a more intimate and even affectionate Drew, harkening back to seventies loveliness on opener “Body Butter”.  Yet a wistful sadness too pervades Darlings, indeed in particular on songs about subjects that seem anything but sad, “Good Sex” and “Mexican Aftershow Party”, both comments on the sad, as opposed to dark, side of ‘living it up.’  The whole record is low-key, maybe not as out-and-out chill as Chill, but definitely minimalist, with Drew doing nearly all the work.  This has created a very beautiful mood album, including airy numbers like “You Gotta Feel It”, but it can get sleepy near the end in songs like “You In You Were” (one of the few pieces to feature a guest star, vocals from Leslie Feist – QRO live review) and “You Got Caught” (Drew does keep with Canning’s solo “You”s, though both have ditched the ellipses…).

If you were looking for the next epic Broken Social Scene record, unlike with Spirit If…, this is not it (hopefully you caught them playing breakthrough album You Forgot It In People at Field Trip last summer – QRO photos – and the band will return to the Toronto festival thrown by their label Arts & Crafts this June – QRO Festival Guide).  Darlings is Drew stripped down and bare, for the whole world to see and feel.