Instead of apprehension, Kevin Drew's solo show was loose from start to finish, without losing skill.... 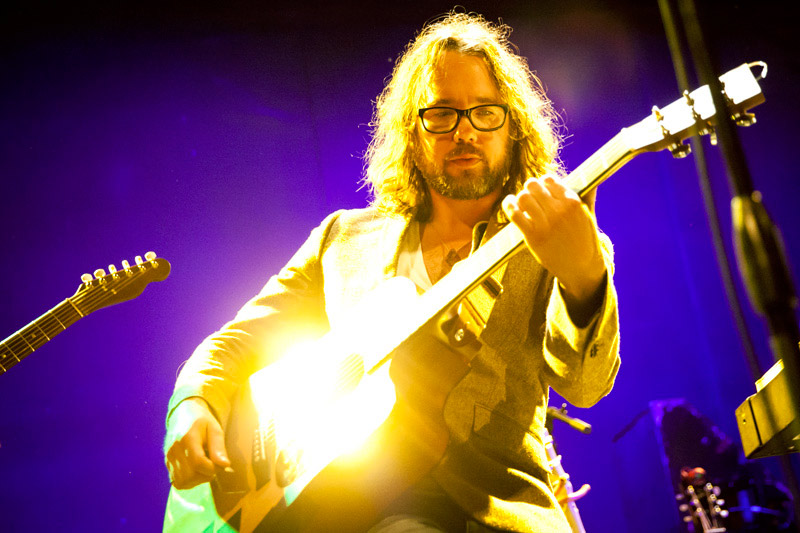 Click here for photos of Kevin Drew at 2014 Field Trip Festival in Toronto, ON, Canada in the QRO Concert Photo Gallery

Too often, great musicians take from the Lou Reed school of public persona and can be kind of jerks, even towards fans. Or they’re at least standoffish, with an ego fueled by praise. That doesn’t necessarily detract from their music (again, see Lou Reed), but a friendly persona on stage can definitely add to it, like when Kevin Drew graced the stage (and the stage floor) at New York’s Bowery Ballroom (QRO venue review) on Monday, April 28th. 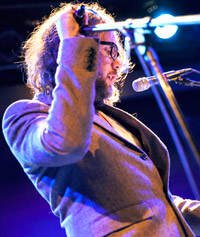 Drew is the main man in Broken Social Scene (QRO spotlight on), the biggest band to break out of the ‘Canadian explosion’ of indie music a decade ago that wasn’t Arcade Fire (and the Butler brothers are American, anyway…). A few months ago Drew released his first solo record, Darlings (QRO review) – well, sort of first, as in 2007 he/they put out ‘Broken Social Scene Presents: Kevin Drew’s Spirit If…’ (QRO review). In both cases, one might have wondered why Drew needed to go solo – in the 2007 it really wasn’t that solo, but Darlings got much more intimate with the musician, as opposed to BSS’ epic nature, for a beautiful piece that one might have worried wouldn’t convert to a live setting; in particular, would Drew be a prickly artiste, insisting on hushed crowds and absolutely no photos? 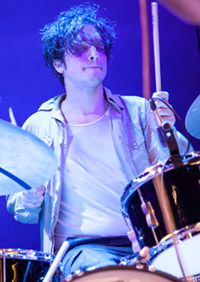 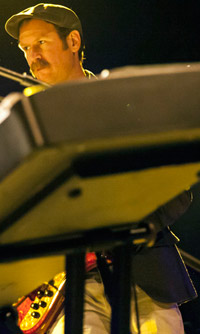 Thankfully, that was not the case, though the crowd would go quiet and eschew photos, for the right reasons. It was one of the first shows Drew performed with his Darlings tour line-up: Martin Davis Kinack (BSS producer), Charles Spearin (of BSS and Do Make Say Think – QRO interview), Dean Stone (of Apostle of Hustle), Dave Hamelin (of Eight & A Half and The Stills – QRO interview), and Ohad Benchetrit (of Do Make Say Think). Yet instead of apprehension, the show was loose from start to finish, without losing skill. 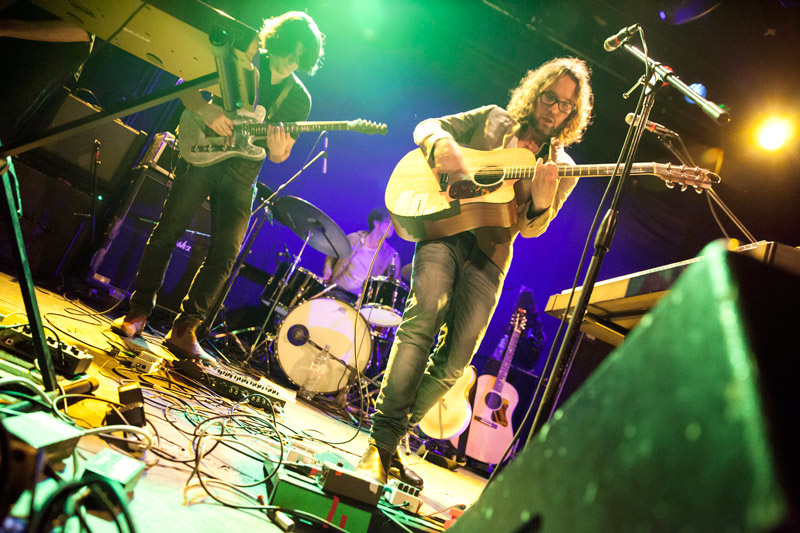 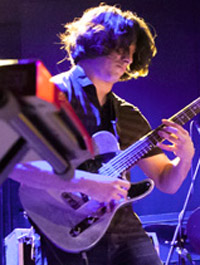 Of course, there were mistakes, right from the get-go: after walking on stage and introducing themselves, Drew noting that they were three weeks late (the show was originally set for April 3rd, then moved when his visa didn’t clear), they screwed up the start of “Mexican Aftershow Party” – so left the stage & redid their walk on (which included Drew getting the crowd to say, again, “Fuck you” and “Love you”). Throughout the evening Drew was in great spirits, yet was also able to deliver touching beauty, especially at the start with songs like “Mexican After Show Party”, “You In You Were”, “Body Butter”, and “All I Know”. He was able to riff about his dad/business manager telling him his career would be better if he didn’t write love songs about urine (BSS’ “Lover’s Spit”), then quietly go into the touching, not sexy, “Good Sex”. He said how East Coasters are more emotional than West Coasters (“not better – not trying to start a Biggie-Tupac thing…”) because we have seasons (“I will move there next winter…”), then do “Bullshit Ballad”. He told his only joke (editor’s note: won’t tell it, to save it for when you see him live), and even talked about needing Propecia (note: he forgot the name of the pill, with which your correspondent shouted it out; Drew then asked if your correspondent took it…), but that only complimented his songs. 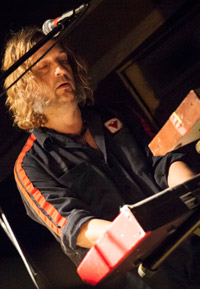 Then Drew took it to another level – actually down a level, to stand in the crowd for “My God”. Going into the audience is always a dicey proposition for a musician, but Drew basically showed exactly how it should be done. He’d brought the crowd in with him emotionally throughout the evening, yet also was engaging, making it easy to take the next step. While he was down there he even got the crowd to come closer, physically, chatting with a few people, hugged a couple. He had the crowd to raise their hands, but didn’t even need to prompt them to lower them, which they did in unison on lyric “I forgot…”. Drew also might be the best musician out there at asking people to put their cell phones down and not take photos, charmingly saying how he wanted this to be “real” – when one person still took some photos [note: not QROer – all of our photos were taken during the approved first three songs], he just sort of waved his up-pointed hand in the scofflaw’s direction, who took it down without anyone dropping their smile (this isn’t the first time he’s pulled that off, and is much better at it than, say, Emily Deschanel – QRO coverage of both doing it at SXSW). 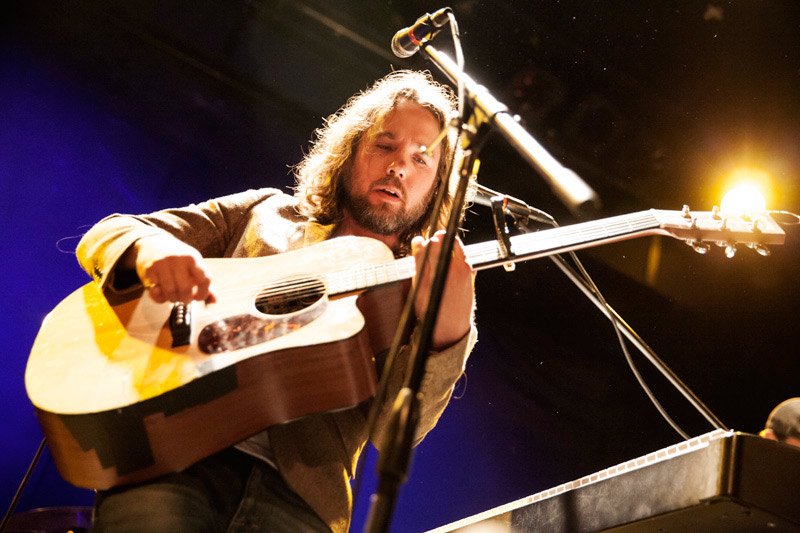 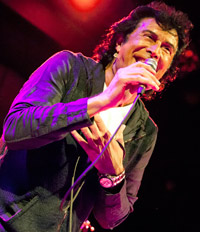 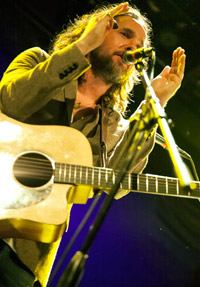 Drew was visibly touched by what had happened, but the night wasn’t done. He did a new song, “Skyline”, dedicated to a Toronto kid who died in the past, brutal winter, plus another with opener Andy Kim (QRO photos – QRO photos of Drew & Kim together at a festival – who joked himself in his set about his hit 1969 song, “Sugar”, and how it had been covered by everyone from Bob Dylan to Homer Simpson…). His ‘BSS Presents’ record served naturally as extra material to fill out the Darlings show, just like fellow BSS Presenter Brendan Canning (QRO interview) used his 2008 ‘Broken Social Scene Presents: Something For All of Us… (QRO review) when touring earlier this year (QRO live review) his own recent solo album, You Gots 2 Chill (QRO review). Drew also didn’t shirk from playing ‘BSS proper’ hits – no “Lover’s Spit” (“‘Lover’s Spit’ is ‘Good Sex’, you know that, right?…”), but “Ibi Dreams of Pavement (A Better Half)” and “It’s All Gonna Break” – in both cases Drew forgot the lyrics (“People don’t know Broken Social Scene lyrics because we mumble…”), but the crowd picked him up in what became sing-alongs. And he closed the evening by going back into the crowd, for “You Gotta Feel It” – then stayed on the stage floor to hug everyone there, literally until security had to clear the floor.

‘Kevin Drew going solo’ could have been a swing and miss, in spite of, or perhaps even because of, his Broken Social Scene success. BSS trafficked in epic beauty that could have been stripped away when solo. His BSS acclaim could have fueled a touchy ego and distant persona on stage. But instead he brought intimate touch to his record, and then managed somehow to compliment it with loose charm live. 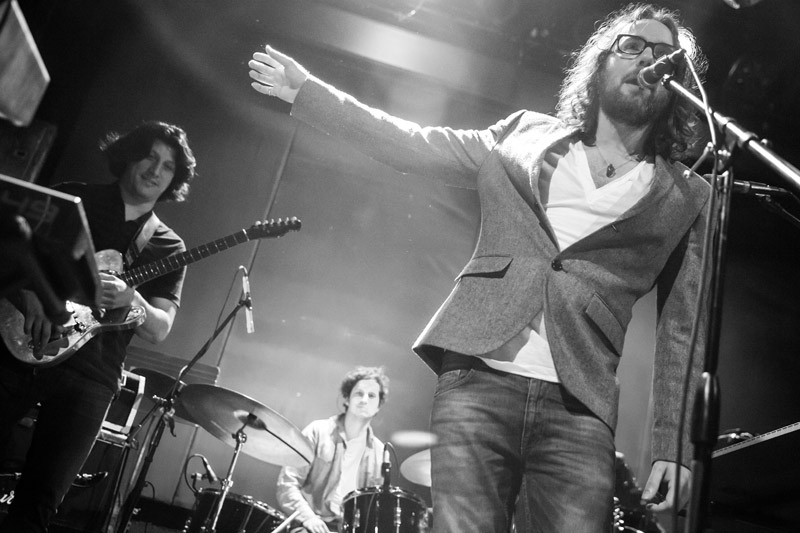