For those not yet galactically initiated, Khruangbin is a psychedelic power trio that does instrumental quotations the way Robin Williams did voices – cursively and with a grace-cum-wink unheard... 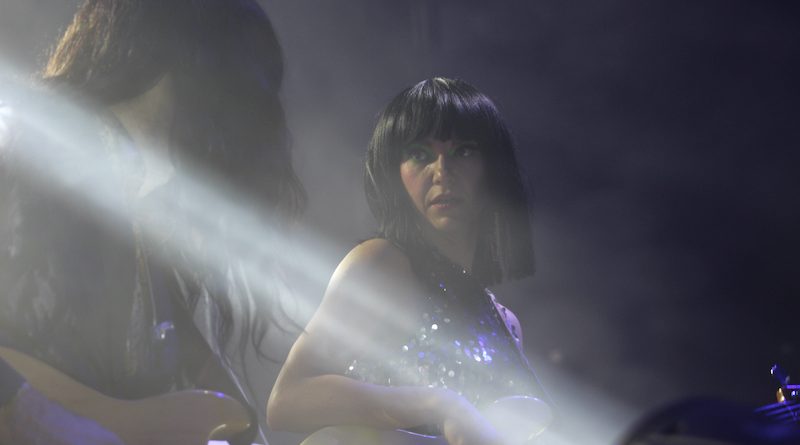 Click here for photos of Khruangbin at 2019 LOCKN’ in Arrington, VA in the QRO Concert Photo Gallery

Click here for photos of Khruangbin at 2019 Pitchfork Festival in Chicago, IL in the QRO Concert Photo Gallery

Click here for photos of Khruangbin at Mohawk in Austin, TX on March 30th, 2018 in the QRO Concert Photo Gallery

Whether she ever actually uttered the notorious “let them eat cake” comment or not is still bitterly contested by academics of varying stripes worldwide, but Marie Antoinette almost certainly did famously say that there was, “Nothing new except what has been forgotten.” Perhaps she had indigestion from a waylaid bite of baked goods when she said this, or perhaps she’d just never been to see Khruangbin, Houston’s hottest musical export since ZZ Top. When these cento specialists de la chorale landed their serenading spacecraft at The Eastern, Atlanta’s most fetching current rock venue, for three nights, Thursday-Saturday, December 2nd-4th, it represented a merging of muso-Milky Ways even Hemingway would likely have struggled to describe.

For those not yet galactically initiated, Khruangbin is a psychedelic power trio that does instrumental quotations the way Robin Williams did voices – cursively and with a grace-cum-wink unheard of prior. Forged out of occidental oblivescence and ouds in 2009 by drummer Donald “DJ” Johnson and guitarist Mark Speer, who shared a passion for Afghan music as well as a tandem stint in the St. John’s Methodist Church gospel band, Khruangbin was brought to full moonbound formation with the addition of bassist Laura Lee. The band’s name translates to “airplane” in Thai, and it becomes evident within seconds of watching this trio perform that this is much more than a symbolically apt musical moniker as the three members of Khruangbin do not so much play music together as they improvisationally stunt-fly through ad-libbed sonic universes inspired by their mosaic of influences.

Having star-traveled together for just over a decade now and with three studio albums, four-working-on-five EPs, and three remix records under their Orion’s belts, Khruangbin arrived in Atlanta this time to tour behind their most current full-length, entitled Mordechai and released in June of last year, along with the Mordechai Remixes arrived by comet-craft last August. Theirs is an exotic ear-odyssey highly reflective of Houston, a city that hangs its trademark cowboy hat on a kind of offhanded disco-diversity that never even stopped to snark at the unspoken suggestion that sparkle and substance could not creatively cohabitate. All of Khruangbin’s oeuvre has been recorded in a barn west of their H-Town home, and yet all of it sounds like what you’d think the unapproachably hip alien jumpsuit chicks from Dude, Where’s My Car? would pop into your stereo without asking when they crashed your basement boogie-woogie.

Hypnotic light holds a conductor’s wand in the full experience of any Khruangbin show and early December’s triad of Atlanta affairs featured melody-synchronized gamma rays that immediately placed the audience within the coolest gumball-colored speakeasy-inside-a-music-box imaginable. The Khruangbin adventure is less a concert in the traditional sense than a sparkling infinity pool of sound suspended in space-weightlessness between the gumbo swamps of reggae-dipped earth-grooves being created by the instrumentation and the luminous aubade of Speer’s and Lee’s dawn-treading vocals. Shimmying atop silver “flying saucer” platforms, the band lifts off straight into the brie and black shiraz bass buffet of “August Twelve” and you immediately know, if you did not already, why Flea routinely makes sure to tell everyone that Khruangbin is the band to watch.

Laura Lee is the legs-for-days Le Grand Contrôle of the Khruangbin collective and her mid-show costume changes are the predictor stick signaling the band’s next aural abruption. Half the crowd is wearing one personalized incarnation or another of her signature mod wig. One of her outer space outfits resembles an inexorably hot rendition of a robe from the Coptic era in Egypt and another is visually akin to a velvet flamingo attending its first Coachella. However, don’t go away thinking the girl in this group garners all the garment glory. Speer’s spectacularly light-responsive cowboy boots are worth the price of admission on their own! A Khruangbin show is well and truly a knockout kermis for both the eyes and the ears.

As they marched out their vaudevillian songcrafts, one night horse after skittering moon-frosted iguana after the next, you would never guess that this tour is coming on the platformed heels of roughly 600 days off during which the band, like everyone else on Earth, was living out their own pandemic-embattled innerspace stasis stories – or that, prior to late summer, many of these songs had not been played live before at all and, in some cases, had not been real-time revisited in more than two years. Listening to them sing through the carillon chimes of “So We Won’t Forget“, if you did not know better, you would be certain that they debuted this June 2020 single only yesterday and were this polished with it because they’d been studiously working it in the studio for months.

“Lady and Man” live is acid-etched and Lee’s lilting upper octave soars sound dipped in halochrome when you hear her sing them in the real. Her vocal delivery makes you think of the literal English translation of the Chinese word for smooth wontons: “swallowed clouds.” Whirling through listener-loved favorites like “The Infamous Bill” and “Pelota” while dealing out an equal number of hyperspectrum baubles from 2015’s The Universe Smiles Upon You and 2018’s Con Todo el Mundo as they did from Mordechai, Khruangbin made short order of as many slick time-traveler transitions through Iranian, American R&B, Thai funk, Jamaican Dub, East Asian pop, Delta blues, and soul sounds as you could shake a stick at. For example, Kool & The Gang’s “Summer Madness” became something Moby-inflected and wrapped in banana leaves under Khruangbin’s care.

The one type of flight it is obvious Khruangbin never takes is that which occurs by the seat of one’s trousers. Recognized and respected across the music industry for their microscopic attention to every recorded note of what may sound like an aural autoschediasm, Khruangbin is never winging it in concert either. Throughout the extraterrestrial expanses of their hypercolor medley of TLC’s “No Scrubs”, Snoop Dogg’s “The Next Episode”, Ol’ Dirty Bastards “Got Your Money”, “Electric Relaxation” by A Tribe Called Quest, The Outfield’s “Your Love”, Sade’s “The Sweetest Taboo”, Ice Cube’s “It Was A Good Day”, “Regulate” by Warren G, and “I Wanna Do Something Freaky To You” by Leon Haywood, it was apparent that they had not only purposely structured a salute to Atlanta’s world-renowned cultural connection to Hip-Hop but taken meticulous care to make this unlikely string of songs sound like a supernatural romance, full of contrapuntal harmonic hardscapes wherein the band fidgeted in the most focused way with dynamics and tempo too.

Closing with an outstanding olio that mish-mashed their “Maria Tambien” with Dick Dale’s “Misirlou” and “Apache” by The Shadows, Khruangbin gave one last melodic master class on how to make experimental ceramics out of any song, from any time, and take it absolutely anywhere. That one of Houston’s other unofficial nicknames is “Space City” should be lost on no one who has enjoyed the utterly unpredictable Andromeda spirals of a Khruangbin performance. They stretch and shape sounds like kinetic sand inside the most colorful black hole where Latin pop breeds freely with jazz and time – or even their own cherished “Time (You and I)”–is merely a mood upon which the filter can always be swapped out at will.

The most comprehensive way to describe Khruangbin’s trilogy of Atlanta performances would be to imagine that David Bowie took charge of The Lawrence Welk Show for three evenings and brought Cambodian street artist, Fonki, along with him to handle the set pieces, lighting, and backdrops. The “La Greca” style of pattern making, made famous by Versace and occurring anytime one continuous line threads unbroken through what appears to the eye as separate shapes within a tapestried whole, also springs to mind. No other band is this futuristic while simultaneously displaying at every turn that their plexi-and-metal futurism is entirely composed on the stardust they can never forget from the past. You leave the Khruangbin nebula with nary a doubt that even post-guillotine Marie Antoinette could call this band only one thing: nouvelle.