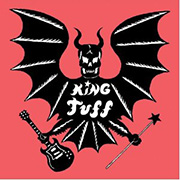 King Tuff is the greatest band name in human history.  This would be a controversial statement if it weren’t so self-evidently true.  It’s fortunate then that the latest self-titled album from this Kyle Thomas-helmed project lives up to its glorious moniker.  Formerly of Feathers, currently of Witch (with J Mascis – QRO album review) and Happy Birthday, Thomas’ diverse activities have informed an album as varied as it is stimulating.

Over the course of its 40 minute runtime, the record bounces between the poles of balls-to-the-wall rock riffage and psychotropic pleasantries, in the process, traversing a poppy middle-ground that’s a delight to behold.  “Stranger” and “Unusual World” best represent these two extremes.  The former is a rockabilly barnstormer that growls with the malevolence of the perpetual outsider and the latter is a charming, almost delicate, psych-number that gambols across speakers in a dreamy haze a-la The Clientele (QRO live review).

This diversity is welcome, ensuring that the album doesn’t lock itself too rigidly into reviving the ‘70s glam-rock aesthetic, which was a real danger for the group.  Though it’s a trite observation, Thomas’ is obviously a Marc Bolan devotee and T-Rex’s sonic imprint is stamped throughout this record.  Yet here he’s successfully avoided any descent into mimicry, astutely wearing his heart on his sleeve rather than letting it dictate his writing.

As a result, for all its exuberance and bombast, this feels like a considered album, the product of a great deal of thought (and no doubt some illicit substances).  Each song feels perfectly calibrated to its object.  “Swamp of Love” sweeps you up while “Keep on Movin'” will have you strutting like a peacock in a leather jacket.  It makes for a glorious second-effort that grabs your attention from the outset and drags it by the neck until its conclusion.