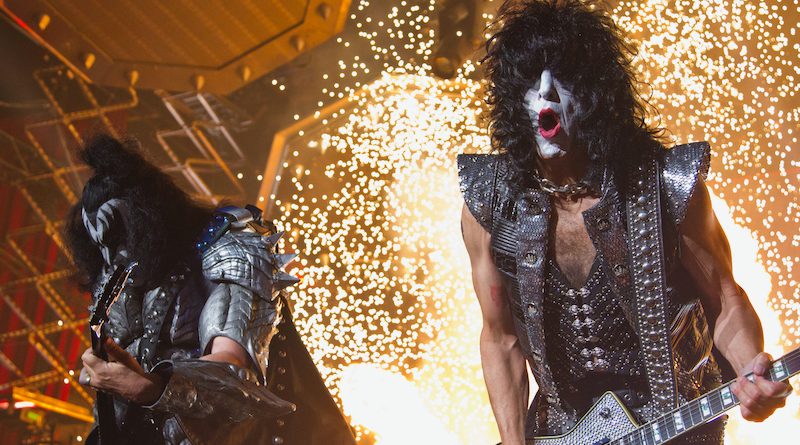 The legendary musical act KISS stormed into the Hard Rock Live at Etess Arena in Atlantic City, New Jersey on Saturday, August 21st, 2021. Nestled along the boardwalk’s casino row, the Hard Rock provided the perfect venue for a group who have unquestionably shaped the genre with nearly 50 years’ worth of quintessential rock and roll music, attitude, and style. Their signature stylings were promoted in an endless parade of fans adorned in KISS shirts walking up and down the boardwalk in the light but persistent rains of the quickly approaching Hurricane Henri. However, the threat of impending severe weather was all but forgotten within the confines of the windowless casino – the show would go on.

Inside the arena, a sea of fans wore KISS shirts with every style and era being represented. The unwritten rule of not wearing the shirt of the band playing proved antithetical to the KISS Army faithful. Furthermore, the most hardcore fans opted to dress head-to-toe as their favorite members, make-up, platform boots, and all. One particularly accurate Gene Simmons clone stalked through the arena and was often stopped and asked to pose for photos. The people- watching pre-show was put on pause when the unusual but thoroughly fascinating opening artist Garibaldi took the stage.

Popular on social media platform TikTok with over 1.9 million followers, the non-musical performing artist took the stage in a white fringed jacket and pants combo. In between hyping up the crowd the 38 year old painter created several new works from scratch to a blaring soundtrack of rock and roll music. Attacking a black canvas with bold swaths of color, Garibaldi offered up a portrait of Bruce Springsteen, a bust of Lady Liberty (which he completed upside down and revealed with a dramatic flipping of the canvas at its completion), and a grand finale of a portraits of KISS above a stenciled ATLANTIC ROCK CITY. Concluding his thirty minute set, announcements and signage directed the audience to website, or to text the number given, in order for a chance to win each of the night’s paintings.

Click here for photos of KISS from GA State Farm Arena in Atlanta, GA on April 7th, 2019 in the QRO Concert Photo Gallery

Click here for photos of KISS from Cynthia Mitchell Woods Pavilion in The Woodlands, TX on August 31st, 2014 in the QRO Concert Photo Gallery

After a short break and a stage reset, Led Zeppelin’s classic song “Rock and Roll”sounded through the PA – a signal to the most dedicated KISS fans that the band were set to take the stage. Once the song ended, the lights dimmed and the video screens filled with images of backstage as a camera caught the group as they exited their dressing room and made their way towards the stage. Moments later the curtain with a gigantic KISS logo dropped as the band descended from the ceiling on extendable platforms. The group kicked off the night’s performance with a particularly rousing rendition of “Detroit Rock City”, the opening track from their 1976 album Destroyer, as showers of sparks and jets of fire filled the stage in typical KISS concert fashion.

The pyrotechnics and explosions continued throughout the set as they slid through an earlier catalog of songs with tracks culled from their eponymous 1974 debut album through 1984’s Animalize. The set was punctuated with a track rare track from the new millennium with “Say Yeah”, from 2009’s album Sonic Boom. The title track from 1998’s Psycho Circus was another seemingly recent number that stood out from the otherwise ‘70s and ‘80s heavy set list. Several elongated solos split the barrage of music with one memorable moment having drummer Eric Singer calmly and casually toweling himself off while he legs beat out a rhythm on the double bass drum pedals.

In addition to this spotlighted performance on the drum riser, Eric Singer would separately rise from the stage for the first song of the encore seated before a baby grand piano to sing the ballad, “Beth”. This encore did not come before several other standout moments which saw Gene Simmons separately blowing fire and spitting blood, guitarist Tommy Thayer firing sparks from the neck of his guitar, and Paul Stanley zip-lining across the arena to perform “Love Gun”and “I Was Made for Lovin’ You”apart from band whilst situated on an elevated side stage set towards the back of the house.

As the night closed out, giant balloons printed with KISS on one side and a caricature of each member’s persona on the other side fell from the rafters as the video screens shuffled through vintage backstage videos, television interviews, and candid moments from the band’s many years of existence. The set’s finale concluded with the iconic “Rock and Roll All Nite”as giant cannons on stage in the audience blew columns of smoke and as confetti filled the air in the ultimate summation of the grand rock and roll concert experience. Riding the stage risers one last time, the band ascended towards the ceiling as Paul Stanley stayed below and swung his guitar through the air, each swing ended in a fiery explosion. As the song came to an end the band rejoined each other and, amid a spectacle of lights, fireworks, and pillars of fire, ended the set standing alongside one another. They thanked the audience and left the stage as the venue doors spilled the audience back into the casino or into the approaching storm.

Charles Spearin – My City of Starlings