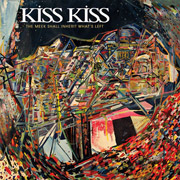 Somewhere in the epic space between avant-garde and emo lie Kiss Kiss and their latest, The Meek Shall Inherit What’s Left.  Written by singer/keyboardist Josh Benash while suffering from a vocal polyp and vocal node that left him unable to speak for a time (and threatened as to whether he would ever sing again), The Meek takes the grand ambitions of avant-garde & emo and marries them.  Not for everyone, but a remarkable record.

Delineating between songs on The Meek is a little hard, as they go in and out, jumping between loud and quiet, epic and speedy, often to arrhythmic beats.  The orchestral avant-garde is strongest on pieces like “All They Draw” and the penultimate “If They Only Knew”, while spastic energy comes through on tracks such as “Plague #11” and “Innocent I (The Corruption of Self Through the Introduction of Naturally Existing Self Producing Chemicals)”.  There are also echoing interludes in “Haunted By the Beauty of an Imperfection” and “Iiiiiiiiiii”.

Kiss Kiss can get over-preening, like with opener “The Best Mistake” or later track “Hate”, and they make a major misstep by not ending with the reaching-for-the-rafters “If They Only Knew”, but instead adding on “Virus”.  Similar to “If They”, but not as strong, “Virus” also goes on for almost sixteen minutes, composing just over a third of The Meek’s running time, just by itself.

Emo is often accused of being all emotion, with little skill, while the avant-garde and orchestral all skill, little emotion, so marrying the two has definite strengths, if running the risk of putting off many who don’t like one or the other, and there are few who overlap and like both.  But with The Meek Shall Inherit What’s Left, Kiss Kiss have made an interesting and noteworthy album.