Note: Knitting Factory had its last show in its TriBeCa location on July 25th.  The venue moved, after rent increases, from Manhattan to the location of the former Luna... 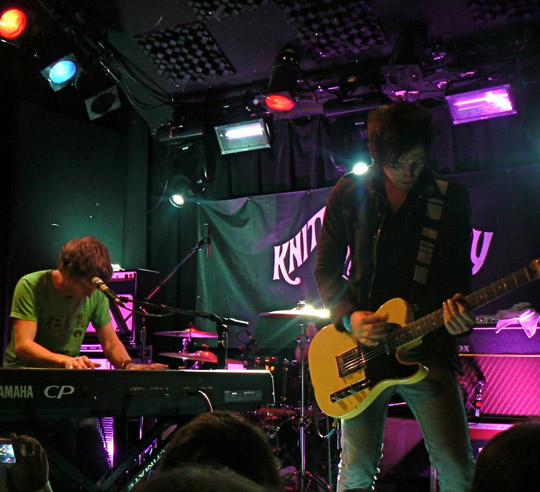 Note: Knitting Factory had its last show in its TriBeCa location on July 25th.  The venue moved, after rent increases, from Manhattan to the location of the former Luna Lounge, a smaller, one-stage location in Williamsburg, Brooklyn.  Knitting Factory Brooklyn opened on September 9th, 2009.

Knitting Factory is located on 74 Leonard Street, Manhattan, right off of the corner of Church & Leonard.  The Knitting Factory has moved around lower Manhattan since it’s opening in 1987.  It currently lays in the northeast corner of TriBeCa, just southwest of the Canal & Broadway intersection that separates TriBeCa to the southwest, SoHo to the northwest, Little Italy to the northeast, and Chinatown to the southeast.  It also lies south (along Sixth Avenue) of Canal Room, and west of Santos Party House.  There is also a second, ‘Knitting Factory Hollywood’, in Los Angeles.

There are actually three stage areas in the Knitting Factory, on three different levels: the Main Space on the ground floor, the Tap Bar one level below, and the Old Office two flights down.  The stage areas get progressively smaller, the lower down one goes.  The Main Space has a small balcony and bar to the house-right, with space (and a few pillars) between the bar and the immediate, up-front stage floor area.  The Tap Bar is only one level, with the stage area really just a corner of the space, creating poor lines of the sight but an up-close atmosphere (the Tap Bar does have the superior bar, with the Main Space’s smaller and without taps – thus the name to the lower level…).  The Old Office is cramped and tight, smaller even than the limited Bowery area venues such as Cake Shop and Piano’s.  Located not far from where the storied CBGB’s used to be, The Knitting Factory inherited some of that DIY ethos, coming off as a little shabbier than other venues (though with a nice, if unassuming, ‘downtown Classical’ white wooden pillar front, similar to that of many buildings and stores in the TriBeCa and SoHo area).  However, the lighting capability in the Main Space, at least, is quite substantial.

The Knitting Factory plays host to a wide range of genres, from indie-rock to jazz, punk, hip-hop, electronic, and infamous ‘Three Floors of Ska’ nights.  While it has the capability to host an act at more than one stage of its development, akin to a band moving from Mercury Lounge to Bowery Ballroom and even Webster Hall or Terminal 5, all the while remaining under the ‘Bowery Presents’ umbrella, few acts seem to, possibly because the smaller floors more often host local acts, and the size differences between the floors aren’t as large.  While the Knitting Factory doesn’t really utilize its vertical (corporate) structure to book anyone you’ve ever heard of at the Old Office, the Tap Bar does punch a little above its weight – though the Main Space perhaps a little below.  Being too many things to too many people has stretched the Knitting Factory a bit, but it’s also given the place a range few other venues can compete with.

74 Leonard Street (right off the corner of Church & Leonard)

Butcher the Bar : Sleep At Your Own Speed