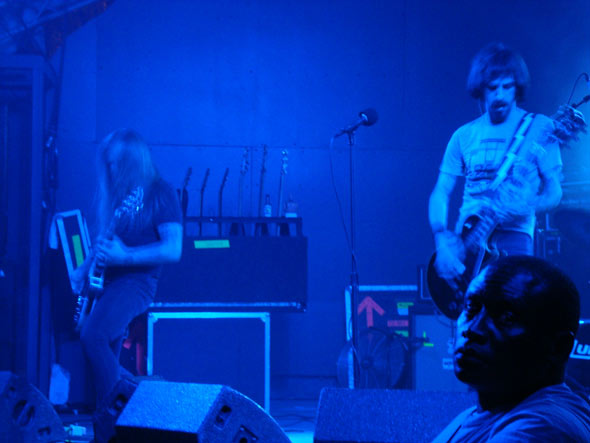 The last time I saw The Sword was over three years ago in Raleigh.  Gods of the Earth was new, and I liked how their two guitarists had distinctive styles: singer J.D. Cronise shredded, while Kyle Shutt played in a bluesier style than I’d expected.

This time, on Saturday, October 1st at Stubb’s in Austin, I saw no such dichotomy.  In fact, the unified riff approach of Shutt, Cronise, and bassist Bryan Richie, all at the front of the stage, was the weakness of their show.  To their credit, they all made their demanding set look effortless, especially Richie.  But too often they were playing dull riffs in unison.  The music needed some variation in dynamics and arrangements.  Not that The Sword should sound like Neurosis, but they’re a little monotonous.

The other big change in their sound was new drummer Jimmy Vela, who plays with more power and less finesse than Trivett Wingo, who left the band a year ago.  Even though Wingo’s style distinguished the band, and though Vela can certainly get fancy with the cymbals and play a good blues beat, overall The Sword now have a stronger, more straightforward drummer who is a better fit for the band.

Although The Sword could get more creative with riffs and arrangements, they put on a good show.  All four of them play hard and with far less gimmickry than some of their lyrics would suggest.  Plus, J.D. Cronise’s voice is great for live metal.  He sounds a bit thin on record, but great on stage, singing in a register that rises above the din just right.

The biggest thing The Sword had in common with that show three years ago was excellent sound.  Unfortunately, that didn’t hold for Kyuss Lives, who operated in a bass-y muck that muddled most every note.  One heard the woofers booming even when Brant Bjork cracked his snare drum or when Bruno Fevery note-riffed independent of other sounds.  It looked like Nick Oliveri and them were doing interesting things, but it was hard to hear it.  To be fair, Stubb’s has an outdoor stage with a gently rolling hill in front of it, so it’s tough to have a good mix in every part of the venue.

One distinct oddity was that new guitarist Fevery’s tone was much closer to Josh Homme’s on Blues for the Red Sun, than Oliveri’s bass was to his own on that record!  Maybe the PA disfigured it, but Oliveri’s tone seemed dirtier and more sinewy than recorded.  At least his backing vocals sounded rad.

Meanwhile, loud and clear at the front of the stage was John Garcia.  Some writers have made hay about the absence of Homme (now of Queens of the Stone Age), Kyuss’s most successful alumnus, on this reunion tour.  Now, Kyuss Lives! – which features a clear name change and three of four original members, including their best songwriter – is hardly offensive, especially in this era of dubious reunions.  Besides, replacing Homme with a competent, un-showy guitarist like Fevery doesn’t change the music much.  Trying to do this show without John Garcia, who is not that famous, would be a much bigger deal.

Yet what, exactly, is exciting about this guy?  It’s hard to pin down.  He’s neither crazed, drunk, intense, nor funny, to name four common frontman archetypes.  He’s often attached to the mic stand, and seems as content singing to Bjork as he does facing the audience.  Nonetheless, the same presence that makes you anticipate him on Kyuss records translates to the stage.  He’s a force.

Whatever Garcia’s power is, Kyuss Lives! needed more of it that night.  It’s odd that on Kyuss records, the measured doses of Garcia are perfect: adding much more of his crooning and cock-rock lyrics might carry the band into cheesy territory, but as recorded, he’s great.  On stage, however, the band needed as much of him as possible.  Finding something to do during minutes-long instrumental passages is a tough task for any frontman, so one shouldn’t begrudge his decision to step off for several parts of the set.  But he left the big Stubb’s stage in the charge of three good players who aren’t much fun to watch.

They drew heavily from Kyuss’s last two records, oddly starting with the echoes that begin “Freedom Run” but then playing Bjork’s “Gardenia”; “Freedom Run” (Bjork, Homme) was played a half-hour later.  Anxiety about whether they’d play their most badass songs seemed to grow as the set wore on, with several holes to fill when the encore began.  They obliged at least with “Allen’s Wrench” (Bjork, Homme) and “Green Machine” (Bjork).  There was no “Demon Cleaner” and no “50 Million Year Trip”, but they’d certainly have had the chops to pull off either.