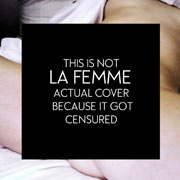 These days, it can be hard to make an impression with a little ol’ EP.  Sure, individual songs can go viral, but the acts behind them either fade in the internet pan as quickly as they flashed, or the band puts up a full-length so we can see if there’s anything else there.  But Paris’ La Femme are memorable with their Le Podium#1 EP, combining surf guitars and indietronic keys in with a French New Wave accent.

A very French accent, as all of the songs are done in la lingua franca, but even if perfidious Albion ears won’t remember the lyrics, they’ll remember the sound.  The surf guitars aren’t run-of-the-mill Dick Dale clone, but take the lower-fi surf that’s gotten popular these days (Best Coast, Surfer Blood) and marry them to cheery indietronica.  Still, it is the Francophile flavor that’s most memorable on Le Podium#1, all François Truffaut and Alphaville, even if it doesn’t vary widely from track-to-track – "Telegraphe" is basically a smaller version of the preceding opener "Sur La Planche", and closer "Francoise" is an instrumental version of La Femme, but the up-tone procession to "La Femme Ressort" does stand out.

Le Podium#1 might have originally gotten attention for its cover, were its take on Gustave Courbet’s L’Origine du monde not censored, but the band’s sound is more than enough to make you remember La Femme.