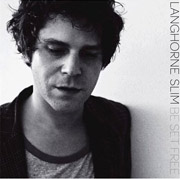 Somewhere between country and orchestral lies Langhorne Slim.  Those two poles aren’t as far apart as you might think, as Slim has been proving for years now.  Taking country sounds, but building them via orchestral arrangements (lots of fiddle/violin/viola), makes a large sound that is also intimate.  His latest, Be Set Free, isn’t a whole lot different from his previous work, and once again his upbeat nature tends to outshine his downbeat, but he does it all very well.

Set Free opener "Back To the Wild" is a good introduction to the record, to Slim, and to his sound, with grand fiddle & standing piano.  Slim gets even more uplifting on the following "Say Yes", but it’s "Cinderella" where the fun gets turned up to eleven.  He does that honky-tonk, down-home good times so well that you never want it to stop.  But he does, with most of Set Free playing sadder & twangier.  The limited exposure to the brighter side of life makes those points shine that much more, but at thirteen tracks, it does feel like he could have let more light in.

Click here for photos of Langhorne Slim at Bowery Ballroom in New York, NY on June 14th, 2012 in the QRO Concert Photo Gallery

Click here for photos of Langhorne Slim at Sound Fix Records in Brooklyn, NY on June 1st, 2008 in the QRO Concert Photo Gallery

Not that Slim can’t do the sad stuff.  The ‘country orchestral’ grandeur of pieces like "Land of Dreams" or the title track (which bookend "Cinderella") have carrying power, and the twang is upped later on in the record, in songs such as "Sunday By the Sea", "Leaving My Love" and "Yer Wrong".  And as one gets farther from the more upbeat first half of Set Free, Slim’s sadness starts to stand out more, such as the flowing nature of "Leaving" or the interesting backing sounds to "Wrong".

Be Set Free still ends with a big, uplifting send-off, "Boots Boy", and between that & the serious ‘twang power’ of the preceding "So Glad That I’m Coming Home", one can get a real feeling of Langhorne Slim.  The Americana roots-revival has been getting bigger & bigger these past few years, and Langhorne Slim is right in the thick of it.