Lanterns On the Lake – Until the Colours Run

Lanterns On the Lake put a nice shoegaze spin on quiet intimacy.... 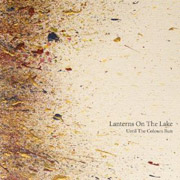 Quiet intimacy is all the rage these days, allowing the crackle of lo-fi to draw the listener in.  Lanterns On the Lake, however, put a nice shoegaze spin on it with their second full-length, Until the Colours Run.

Colours opener “Elodie” goes between moments of epic fuzz and that of stripped intimacy, and that holds true for the record as well, though more song-to-song, not within a single number.  “The Ghost That Sleeps In Me”, “Green and Gold”, “Picture Show”, and the wryer closer “Our Cool Decay”, all are very quiet and close-up to singer Hazel Wilde’s voice (which is given a somewhat nightclub piano old-style cabaret on “Picture”), though “Ghost” does explode near the end.  That explosion is of indie-rock shoegaze, which stands on its own in such pieces as “The Buffalo Days”, brighter title track, “You Soon Learn”, and standout “Another Tale From Another English Town”, which manages to expand without losing that carrying connection.

While quiet intimacy is doing well, shoegaze hasn’t managed to return – despite the first new My Bloody Valentine record in forever, Asobi Seksu (QRO live review) called it quits last year.  Hopefully Lanterns On the Lake can ride both waves to critical and commercial success.