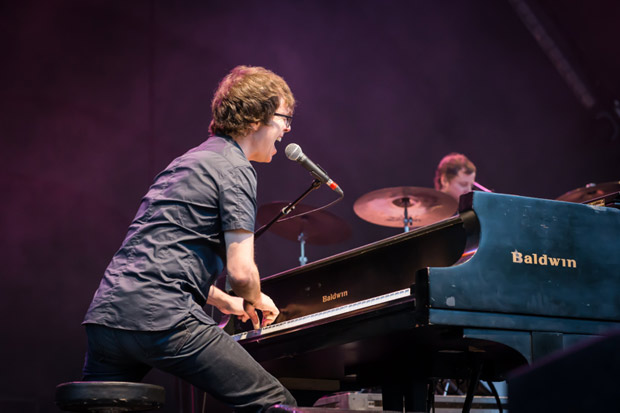 Last year, veteran Canadian pop/rock band Barenaked Ladies embarked on their ‘Last Summer On Earth’ tour with the likes of Cracker (QRO spotlight on) and Blues Traveler – but it wasn’t the last summer for even the tour, as in 2013 they announced their second ‘Last Summer On Earth’ tour, with Ben Folds Five and Guster.  It has proved to be a successful tour, drawing fans of all three bands, who might not know the other two, and making for an exceedingly enjoyable evening, like the tour’s close at Prospect Park Bandshell in Brooklyn on Tuesday, July 30th.

Before anything else, it should be noted that there were some serious problems at the venue.  Unlike most of the shows at Prospect Park Bandshell (QRO venue review), this was a ticketed show, to benefit all of the great free shows held there every summer as part of Celebrate Brooklyn!.  But really nothing could excuse having a line to enter for fans – who’d bought tickets! – that snaked forever into the park.  There were multiple bends in the line where one would think that you’d seen the end, only to realize that it still wasn’t even in view.  Now, to be fair, the line moved quite swiftly, but it created a serious hamper for anyone entering – especially given that the show started so early, not just with doors at 6:00 PM, but Guster going on just at 6:25 PM.  There were many fans that’d come for Guster who basically missed the band that they’d bought a ticket to the sold-out event for (though you could obviously hear them outside of the outdoor venue).  Lines are not new at the Bandshell, especially for ticketed shows, but for the recent, ticketed, Belle & Sebastian (QRO photos)/Yo La Tengo (QRO photos) concert there, the line to enter was nothing like that.  There were likely many factors in the massive queue, from early start time, more people there for the first opener than usual for a first-of-three openers, beautiful day, folks bringing bags to the park that had to be checked – but not having the second entrance open certainly did not help (wasn’t even open to leave, creating one more bottleneck & line before the night was over…).  The situation continued inside – there were lines for everything from drinks to food to bathrooms to entering to the seated area to even to exiting the seated area between the bands.  And everyone entering the venue on one side made that side particularly packed, as to get to the other side one would have to dance around many, many towels & blankets on the grass in the standing area (which was only five bucks less than the far-superior seated section, where one could walk up to the front). 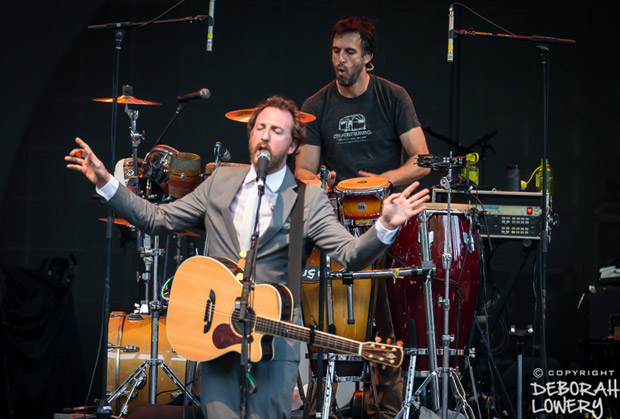 Click here for photos of Guster at Central Presbyterian Church in Austin, TX on January 6th, 2013 in the QRO Concert Photo Gallery 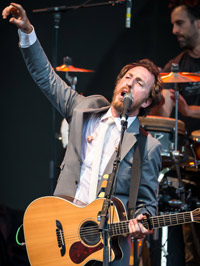 But even as people were complaining about entering and getting around, Guster were all smiles.  Far more popular than most bands at the bottom of a three-band bill, the Boston group do traffic in some of the neo-hippie elements – dedicated fan base, liberal taping policy, a song about “Amsterdam” – but are more relaxed and cheery, less psych and guitar-wankery solos.  Singer/guitarist & frontman Ryan Miller at one point joked with the crowd about his out-of-the-norm attire, an honest-to-god suit.  Apparently it had been bought for him or something, but it was so expensive that he’d have to claim it as a gift on his tax form – until someone informed him that if he wore it on tour, he could write it off as a business expense.  So he’d been wearing it this whole ‘Last Summer on Earth’, telling that story – but by this point, he’d gotten to like dressing up for shows, looking like ‘the man’ (in the positive, cool sense, not the negative, authority sense).  Even if you didn’t know Guster going in, even if you had written them off as just another jam band, one had to enjoy their set. 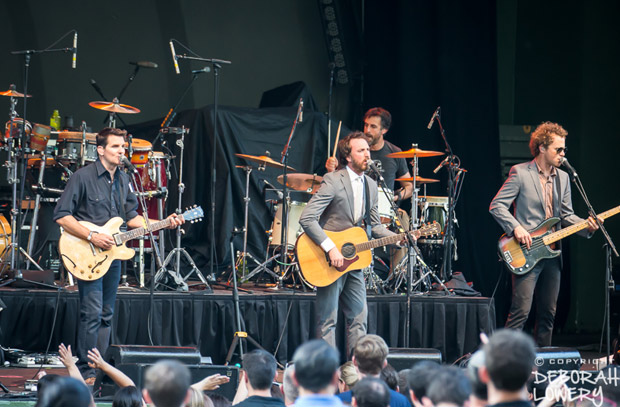 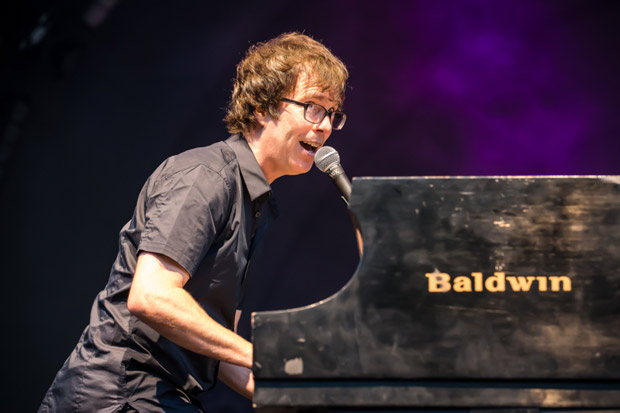 If Guster were the band for the sunnier jam band fans, Ben Folds Five was for the sunnier hipsters.  The trio’s ‘reunion’ (Folds had been doing his solo stuff since the band broke up in 2000) last year was a particularly welcome one, as it heralded the return of their three great nineties records, Ben Folds Five, Whatever and Ever Amen, and The Unauthorized Biography of Reinhold Messner – but it’s been no ‘classics’ tour, as the band also came out with the great new The Sound of the Life of the Mind (QRO review).  They’d done their own proper tour last year (QRO review), which was compiled on record earlier this year in BF5’s first live album, Live (QRO review), which managed to capture a lot of what made seeing them in person so great. 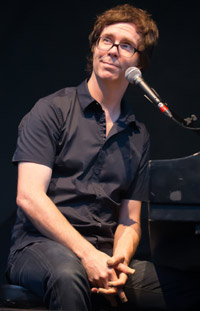 On this tour with two such upbeat bands, Ben Folds, Darren Jessee, and Robert Sledge couldn’t help but be particularly upbeat, even for this often-upbeat band.  There were also a ton of loyal fans there for them, cheering right from the get-go with opener “One Angry Dwarf and 200 Solemn Faces”.  Admittedly, the cheery nature of the evening meant that the sad songs like breakthrough single “Brick” (still the best-ever song about an abortion) or Jessee’s following new “Sky High” didn’t have quite the power that they usually do – but it also meant that the happy songs were even more fun.  Everyone was shouting, “Give me back my black t-shirt” for “Song For the Dumped” (wherein the band did a jam in the middle, and Folds even tossed an actual black t-shirt into the crowd), or laughing at the hilarious opening intro to “Underground” (BF5 were mocking hipsters before Brooklyn was hip – before there even were ‘hipsters’…).  Particularly funny was right after “Dumped”, when the stage crew brought out a string of bras, then a string of panties, strung up from Folds’ piano to Sledge’s speaker with jumper cables (Folds: “This is how they act in Canada,” and, “Thanks to Barenaked Ladies for displaying their various conquests across America,” with which Sledge replied, “I think this is actually their personal collection…”).  And for the close with “Army” (which Folds dedicated to an “awesome dude” who tweeted him earlier, who had just got back from Afghanistan – BF5 were also praising the army long before 9/11 & Iraq & Afghanistan & …), the crowd were in an awesome chorus sing-along, with Folds even dividing the audience into two parts to do it right – Barenaked Ladies even later said that it was the best chorus “Army” had had all tour.  If you’d just bought a ticket for Ben Folds Five, you came away happy. 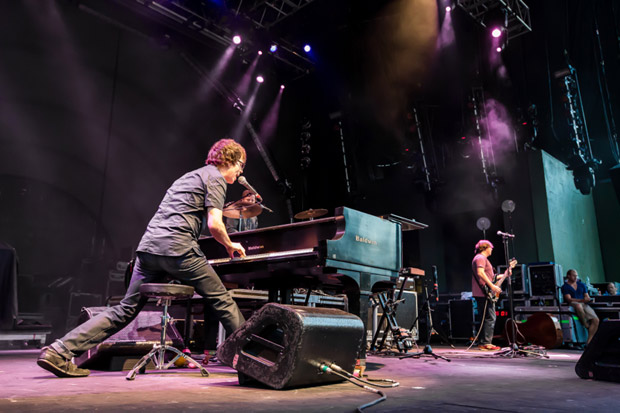 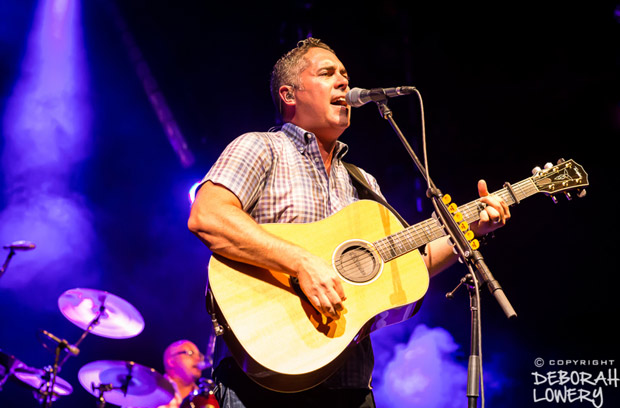 Click here for photos of Barenaked Ladies at Verizon Wireless Amphitheatre in Atlanta, GA on July 12th, 2015 in the QRO Concert Photo Gallery

Click here for photos of Barenaked Ladies at ACL Live at The Moody Theater in Austin, TX on October 24th, 2013 in the QRO Concert Photo Gallery

But the headliners were Barenaked Ladies.  You might have stopped paying attention to them a long time ago, or only briefly remembered them when they were name-checked in an episode of Community.  But they also made the theme song for the well more successful Big Bang Theory, and have been highly successful for over two decades.  And there were lots of fans there for the Canadian band, singing along to their own classics, especially from 1992’s debut full-length, Gordon, in “Be My Yoko Ono” (which was guest-sung by Boothby Graffoe, who’d played at other dates on this Last Summer On Earth tour), “Brian Wilson”, and “If I Had $1,000,000” (which saw Ben Folds not only guest-spot on keys, but did a synth solo during and after pitched monkey stuffed animals at frontman Ed Robertson, who batted at them with his guitar).  The sing-along to “$1,000,000” was particularly notable, as seemingly everyone knew the little in-between lyrics, like not just, “I’d buy you a fur coat,” but also the quickly added, “But not a real fur coat, that’s cruel.” 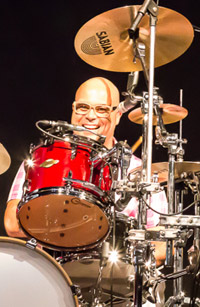 Admittedly, the new material from this year’s Grinning Streak early in the set wasn’t as impressive, but how could it be against, say, the song Stephen Hawking once quoted (Robertson mentioned a recent “nerdgasm” he’d had when Hawking, at a Big Bang Theory panel for Comic-Con, said that the universe could be explained in seventeen words – the first seventeen words of Barenaked Ladies’ theme song for the show, “Our whole universe was in a hot dense state / Then nearly fourteen billion years ago expansion started…”), or name-checking The X-Files (and The Smoking Man) in “One Week”?  Barenaked Ladies also had some great cover moments, mostly segues and medleys into choruses of such greats as “No Sleep ‘Til Brooklyn”, Spinal Tap’s “Big Bottom”, New Order’s “Bizarre Love Triangle”, “Blinded By the Light”, and more (including synchronized dance moves) – but the evening did end with drummer Tyler Stewart on vocals (and Robertson on drums) for not only the Ladies’ own “Alcohol”, but closing with Violent Femmes’ “Blister In the Sun” (another upbeat band with an even longer life & more nerd-rock appeal).

The initial bill of Barenaked Ladies, Ben Folds Five, and Guster might have put people off of The Last Summer On Earth, given that many fans of any one of the three acts would have wanted to see their band as headliner, and didn’t need to catch the other two.  But the line-up actually worked very well (even if the venue didn’t…), bringing to all not only a great performance from who you were there to see, but two more exceedingly enjoyable ones as great surprises.