<img src="https://www.qromag.com/wp-content/uploads/2009/01/lateofthepierfantasyblack.jpg" alt=" " />After a slew of singles, U.K. disco-dance act Late of the Pier released their full-length debut, <em>Fantasy Black Channel</em>, last year over there, and now... 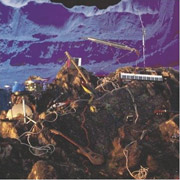 After a slew of singles, U.K. disco-dance act Late of the Pier released their full-length debut, Fantasy Black Channel, last year over there, and now it comes to America – can we send it back?  The international discotronica movement has been growing & growing in the last couple of years, with smash hits like France’s Justice, Australia’s Midnight Juggernauts (QRO spotlight on), Kentucky’s VHS or Beta (QRO spotlight on), and more.  Yet when Castle Donington natives Late of the Pier joined the ‘New Rave’ scene pioneered by (or at least the ‘New Rave’ term was coined for) The Klaxons (QRO album review), they brought back all of the cheesy eighties-synth disco that made you hate dance music in the first place.

That’s particularly true of the beginning of Fantasy Black Channel, which introduces itself with the lame grand keyboard instrumental “Hot Tent Blues”, and when heavy guitars are added at the end to segue into the following “Broken”, they don’t improve things.  Early pieces like “Broken” and “Space and the Woods” bring to mind the weak ‘future discotheque’ sounds one would hear in scenes at dance clubs in early-to-mid eighties movies.  And it only gets worse with the off-kilter rhythms from “The Bears Are Coming”, coming out in click-clacks and too deep synth.

After that poor opening third, the rest of Fantasy is an improvement, but only just.  “Random Firl”, the standout-by-default, has a more stable beat that borders on being compelling at times.  But tracks like “Heartbeat”, “Whitesnake”, “Focker”, and “Mad Dogs and Englishmen” are merely shallow disco-dance that you’ll forget once they next track plays on the club’s speakers.  “Bathroom Gurgle” goes from forgettable high synth to worse grand parts, while the disco-press instrumental “VW” randomly switches into slow-mo, for no apparent reason.

The hidden “No Time” follows “Gurgle” at the end of the record, and is a stark change in its stripped strum, with a weird haunt reverb/echo, but nothing major.  Fantasy Black Channel is much more like “The Enemy Are the Future”, whose eighties dance-synth and sustain brings to mind the bad disco Bowie of that decade – and that’s a relatively compliment for this record.