<img src="http://www.qromag.com/wp-content/uploads/2010/07/lcdsoundsystemthisishappen.jpg" alt=" " />Can LCD return to the now crowded disco pit, especially with a record that they have said will be their last?<span>  </span>Yes, <i>This Is Happening</i><span... 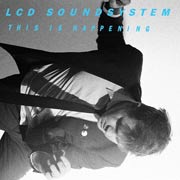 Once upon a time, terms like ‘dance-punk’ or ‘electro-rock’ were synonymous with one act above all others: LCD Soundsystem.  Main man James Murphy was “the first one to play Daft Punk to the rock kids”, as immortalized in LCD’s “Losing My Edge” – as opposed to the hit single from their 2005 self-titled debut, “Daft Punk Is Playing At My House”.  LCD followed it up in 2007 with Sound of Silver (QRO review), a similarly strong effort, albeit without the newness of LCD.  But after touring with the likes of Arcade Fire (QRO live review together), Murphy followed Fire into hiatus, after all the exposure.  He focused on his label, dance-punk pioneer DFA, as well as DJ identity with LCD drummer Pat Mahoney, Special Disco Version – as the genre he helped start grew & grew.  So can LCD return to the now-crowded disco pit, especially with a record that Murphy has said will be LCD’s last?  Yes, This Is Happening.

Click here for photos of LCD Soundsystem at 2016 Lollapalooza in Chicago, IL in the QRO Concert Photo Gallery

Click here for photos of LCD Soundsystem at Terminal 5 in New York, NY on March 30th, 2011 in the QRO Concert Photo Gallery

Click here for photos of LCD Soundsystem at 2010 Pitchfork Music Festival in Chicago, IL in the QRO Concert Photo Gallery

LCD Soundsystem’s success has been rooted in tunes that perfectly balance between too complex & too simple, making them both accessible & interesting, suitable for the dance floor, but also at home.  And Murphy doesn’t stick to one beat or specific electronic style, keeping his material fresh.  All of that is present on Happening, beginning with the quiet, click-clack & distant vocals opening “Dance Yrself Clean”, which goes big in its second half.  Happening has the easily memorable & enjoyable single, “Drunk Girls”, as well as the more interesting singles with killer choruses, wrought & mock-wrought “I Can Change” and disco-tech beat extended the right way “Pow Pow”.  But there’s also the ‘sad dancetronic’, even New Wave in feel “All I Want”, robo-Bowie (QRO album review) dance-press “One Touch”, laid back near-jazz penultimate “Somebody’s Calling Me”, and brightening finish “Home”.

Put those final two song titles together and you’ll get Murphy’s professed goodbye to LCD, which has only kicked up his cynicism, something that has always stood out about him, when compared to the typical dance music maker.  He goes a bit overboard with “You Wanted a Hit” (just look at the title – and the nine-plus minute piece includes a three-minute instrumental tech key intro), but his attitude on overseeing ‘the scene’ varies, from that too obvious tone to the wearier “All I Want”, ironic “I Can Change”, one-last-party “Drunk Girls”, and happy-to-have-been-there, but-has-to-go “Home”.  If LCD Soundsystem is really leaving (all rock goodbyes have to be taken with more than just a grain of salt…), the act is leaving on top of the scene they helped start.

The Wilderness of Manitoba : When You Left the Fire