Les Savy Fav closed out Brooklyn's House of Vans as only they could.... 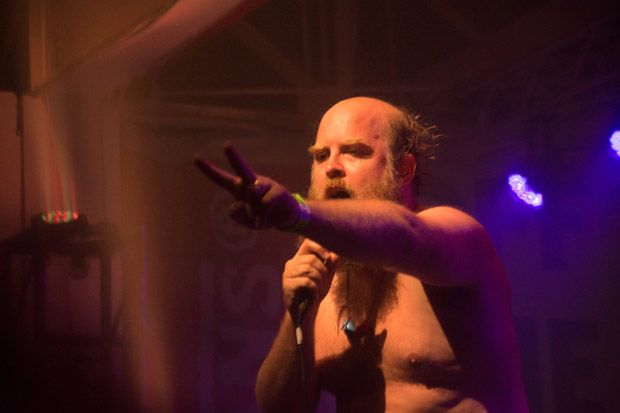 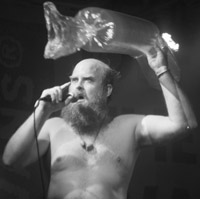 Brooklyn’s House of Vans (QRO venue review) has had some wild shows this summer.  It all kicked off with Canadian hardcore act Fucked Up, which saw singer/frontman Damien Abraham doing his usual crazy antics in the photo pit & crowd (QRO live review) – all so very reminiscent of Les Savy Fav’s Tim Harrington, not just in action but also in look: big bald guy with big beard & big belly, and not afraid to show it.  In fact, Harrington was in the crowd for that show and remarked that Abraham was his “twin”…

From then on at House of Vans, there has been some chillwave like Toro y Moi (QRO photos), but the shows mostly have hewed to the wild, with artists like !!! (QRO live review), Melvins (QRO live review), and Kid Dynamite (QRO photos) – and always, Harrington was there.  Sort of the host of the space, he did a series of video interviews for VICE Magazine, and was always recognizable among the free drinks in VIP (often with another wild performer with less hair on his head & less shirt on his chest, Har Mar Superstar – QRO photos).  But Harrington really brought it at the final House of Vans show, Thursday, June 29th, when Les Savy Fav closed out the venue – and the summer – as only they could. 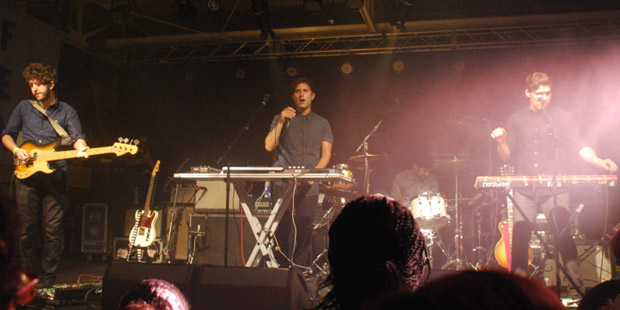 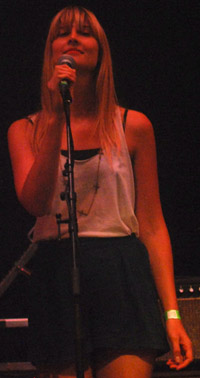 The evening started with special guest Small Black, who recently put out their great Limits of Desire (QRO review).  Their appearance at House of Vans was only announced very late (as Bowery Presents didn’t want it to compete with their paid Terminal 5 gig on September 7th – QRO NYC Show Preview), long after the free RSVP had closed, so it wasn’t possible for people who wanted to see them to go, limiting their draw.  Also limiting, of course, was the free beer tent, separate from the stage floor, preventing anyone who wanted to watch music & drink for free (same for the separate VIP) – and as anyone who’s been to House of Vans knows, the free beer runs out fast, which only creates a huger clusterfuck to get as much as you can, while you can (‘cause if you don’t, someone else will…).  Following Small Black was Delorean, from Spain’s Basque country.  The group soon releases their new Apar early in September, so naturally played songs from it – but also had their own special guest in Erika Foster (i.e., Erika Spring – QRO album review) of Au Revoir Simone (QRO spotlight on – and those lovely ladies have their own new record, Move In Spectrums, out at the end of September). 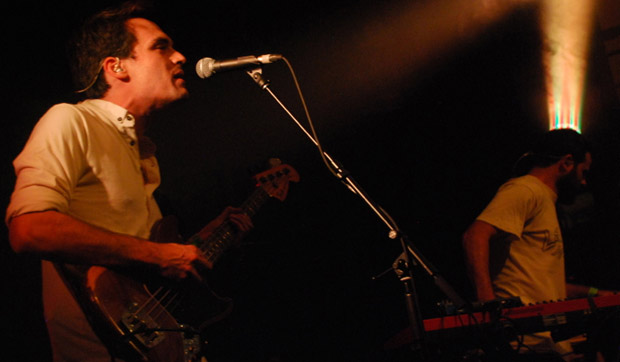 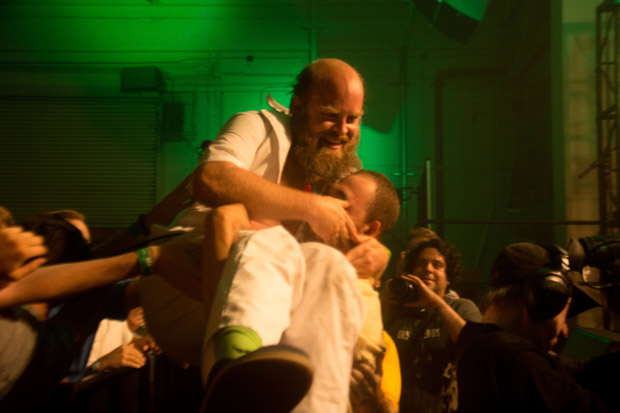 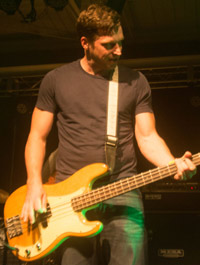 But the main event was, of course, Les Savy Fav – there’s no way they could not be the main event at any show they play.  Hell, they practically upstaged Arcade Fire, LCD Soundsystem, and Blonde Redhead on Randall’s Island back in 2007 (QRO recap), and they’re Brooklyn locals.  What’s more, this was the first show that the band had performed in two years (at nearby Music Hall of Williamsburg – QRO photos of LSF there another time).  Harrington & Les Savy Fav (whose bassist, Syd Butler, founded/runs their little-label-made-good, Frenchkiss Records – and is married to Blue Bloods actress Amy Carlson…) went crazy from the get-go.  As is his wont, Harrington started dressed up and ended very undressed, removing pieces of clothing as the night went on, from silver smock to black cape to white overalls to denim cut-offs.  He was also in the crowd maybe more than he wasn’t, handing the mike to fans (even if they didn’t know the words…).

After the show, Harrington admitted to QRO that the band hasn’t done anything since 2010’s Root For Ruin (QRO review), and don’t have plans for more.  But they are, admittedly, a band better live than on record (every band is either that or the other way around), and for one shining night they rocked House of Vans’ socks (and shoes) off. 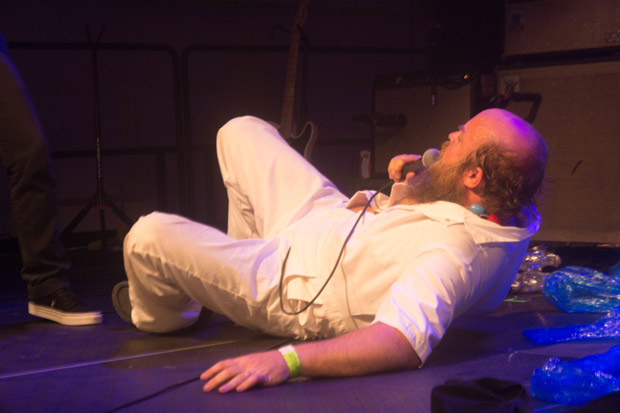