Letting Up Despite Great Faults : Self-Titled

<img src="https://www.qromag.com/wp-content/uploads/2009/12/lettingupdespitegreat.jpg" alt=" " />The buzz of Letting Up Despite Great Faults is getting louder by the day. ... 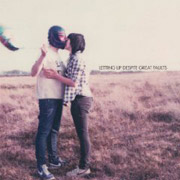 The buzz of Letting Up Despite Great Faults is getting louder by the day.  The debut album from singer/songwriter Michael Lee and his band serves up the listeners a delectable electro-shoegaze, sounding like a perfect marriage of M83 (QRO live review) and Slowdive.  Often compared to Radio Dept and Postal Service, Letting Up also recalls The Pains of Being Pure at Heart (QRO live review), Boy in Static and Ides of Space.  However, the L.A. band got their name from Blonde Redhead’s (QRO live review) song, "Loved Despite Great Faults".

It takes several listens to notice the seams between the tracks on Letting Up.  "In Steps", which seems to be the blogosphere favorite, starts off the album in a mirthful stride.  With a unified sound consisting of analogous fuzzy, airy vocals and homogenous instrument schemes in all the tracks, one has to pry apart each song with a slight degree of separation of tempo and melody.  The listener could drift away in Letting Up‘s warm daydream pop and forget that it’s already song number nine (appropriately titled "Release") – the end of the album.

Over a half dozen singers and musicians contributed on Letting Up, but Lee’s right hand turns out to be a sequencing software, Ableton Live, which he taught himself from Internet tutorials.  The recordings went through a final inspection with mastering engineer Jeff Lipton (Andrew Bird, Spoon, The Magnetic Fields).

Having already had a song ("Disasters Are Okay") from their debut EP Movement, feature in an episode of One Tree Hill, Letting Up is poised to gain fans far beyond its native California.  After all, some of us wouldn’t mind a sunny export – especially when winter’s at our door.

R. Garcia : Everything Ever