There has always been a need for more day showcases and Levitation 2021 did not disappoint.... 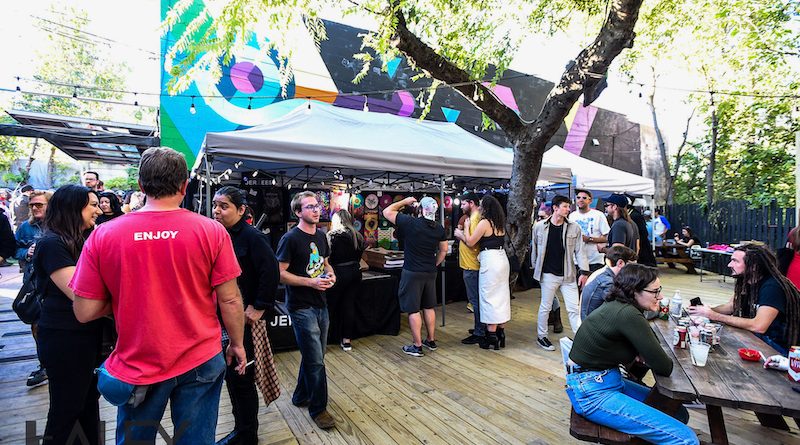 There has always been a need for more day showcases and Levitation 2021 did not disappoint. An entire afternoon/early evening of bands occurred on Saturday, giving fest goers the opportunity to see five acts in a mere four hours. Local Austinites and a group self-prescribed as “A band for Quentin Tarantino,” Annabelle Chairlegs crooned out their desert noir for a large crowd of early attendees in the Empire Control Room Garage. Meanwhile, on the inside stage, Silver Synthetic, a garage-psych trio from New Orleans donned their Halloween best to dazzle the growing audience.

Levitation Room, a garage-psych band from Los Angeles drew music fans back outside and got the crowd to start to vibe in unison as the sun set. OHMME, the rock trio from Chicago, built dance energy into the final set of the night, before surf-rock band Shannon & The Clams took over. In true fall holiday fashion, most bands dressed up, and in some cases, their instruments for the festive, chilly occasion. Frontwoman Shannon Shaw always brings an incredible energy that swung the party into full effect for another incredible evening of Halloween merriment and psychedelic vibes in downtown Austin.

Festival organizers should be commended for booking acts that featured artists that were diverse in both sound and appearance. The lineup on Saturday night at Stubb’s took the crowd into orbit like a Jeff Bezos rocket with Shabazz Palaces and Thundercat. These two African American artists presented an interesting duality. On one side you have Shabazz Palaces featuring Ishmael Butler, a.k.a. Butterfly, known for his work with the ‘90s jazz-funk group Digable Planets, and on the other side you have Thundercat who’s radio-friendly R&B hits are belied by his true desire to extend the limits of his six-string bass. Shabazz Palaces emerged on a mostly darkened and smoky stage while Butler played samples and built up a dream world of space-tinged poetry that was abstract and transcendent. Thundercat’s performance was no less than a Miles Davis-like jazz voyage. He didn’t play songs as much as he lit the fuse on a bottle rocket while we held onto it with our dear lives. His most recognizable songs like “Dragonball Durag” would start a groove that would descend into ten minutes of gravity defiance before returning to earth – it was quite possibly the best set of the weekend.