It’s no surprise that The Black Angels created a music festival rooted in that passion where every band you listen to is your next favorite band.... 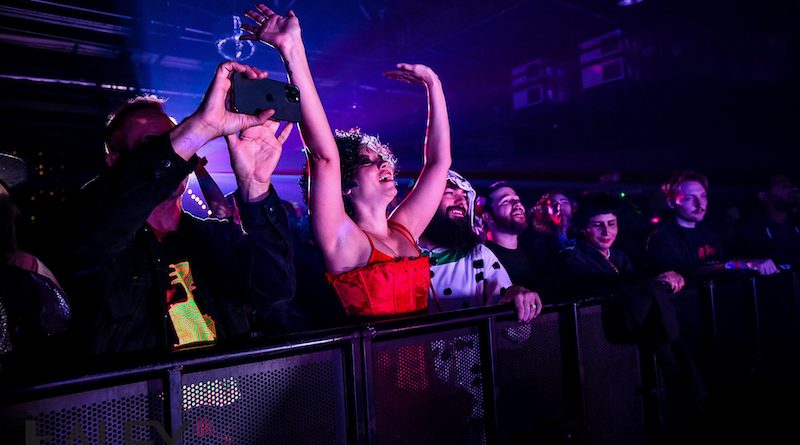 It’s no surprise that The Black Angels created a music festival rooted in that passion where every band you listen to is your next favorite band. The Black Angels have lost a connection to their fans, even with a lack of (much) live music over the past year and a half. Technically having not played a live show since February of 2020, it felt like from the moment they played the first note of their set in “Young Men Dead” from the album Passover on Friday night at Stubb’s, time stood still and the pandemic faded into a distant memory. Getting lost in their set is how live music should make you feel. There were a few new songs in their setlist, and it’s been almost five years since the last album, Death Song, so perhaps there might be a new album set to release soon.

While Stubb’s featured more masculine energy, Friday night at Hotel Vegas was for the women. In keeping with the evening’s themes (1: mostly females, 2: from LA, 3: costume-garbed), The Paranoyds took the outdoor stage at 8:30. Paranoyds’ bratty playfulness warmed up the early Friday-evening crowd as they carved through a setlist heavy on tunes found on 2019’s Carnage Bargain LP, with guitarist Lexi Funston and bassist Staz Lindes trading instruments mid-set for a few tunes. Laila Hashemi’s wobbly, Manzarek-like keyboards underpinned the four-piece’s poppy punk, creating a distinctly campy vibe, like a surf rock band transported from a late-1960s B movie. The band grew more infectious as they got deeper into their set, closing with the heavy slow burn of “Sunburn”.

Garage rock trio L.A. Witch replaced their brooms for devil horns at the next performance on Friday night. The pandemic was a real drag on bands releasing new material in 2020 – lead singer Sade Sanchez lamented that it was nice to finally get to play new songs from their album Gen-Z live from 2020 after sitting out for over a year. Perennial Levitation Fest performers La Luz closed out the evening with surf psych lifted up by the soothing harmonies of vocalists Shana Cleveland, Alice Sandahl, and Lena Simon. They also debuted new materials as they worked through a maturing sound on the self-titled album La Luz from this year.

Coldplay – Music of the Spheres