Levitation 2021 was more than just a multi-sensory five-day music festival in downtown Austin on Halloween weekend; it was a vibe.... 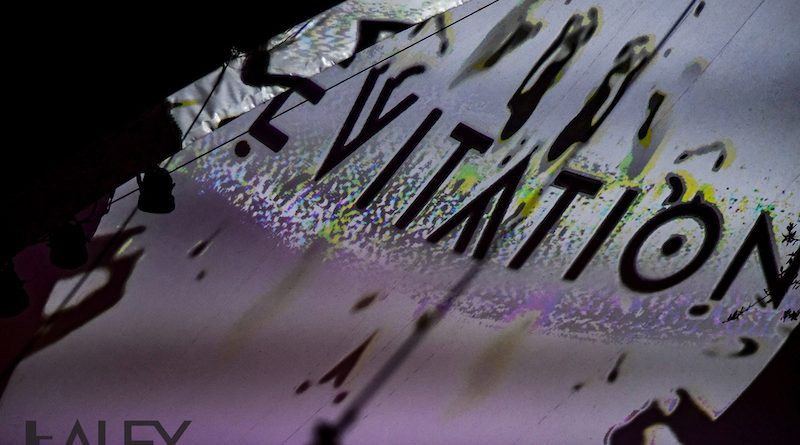 Kicking off The Black Angels-founded music festival, previously known as Psych Fest, was a pre-party on Wednesday night at Empire Control Room. Early evening saw Philadelphia shoegaze band Nothing soak in the liquid lights and strobes – they slowly built up their songs before crashing down like distorted thunder. Meanwhile, inside the venue, a darker mood emerged with the metal sludge band Here Lies the Man returning to the festival for a second time.

With the vibe set, Austin’s stoner metal trio The Sword took the stage, punctuating the sludgier and heavy offerings during the week. Gauging the crowd, Nordic-looking guitarist Kyle Shutt asked the crowd “are ya’ll levitated yet?”, before the band shredded through 13 songs and an encore. Their set leaned heavily on their 2012 hit album Apocryhpon with headbanging jams “Freya” and “Cloak of Feathers.” They also gave a nod to Texas music legends ZZ Top with their cover of “Nasty Dogs and Funky Kings.” John Cronise’s vocals were powerful and pleasantly fine-tuned after a summer of touring with Primus. Inside the venue, Former Dum Dum Girls and Vivian Girls Frankie Rose closed out the night to a crowd so quiet, she said, “Ya’ll are too quiet, let’s do DMT.”

Reverberation Appreciation Society changed Austin Psych Fest’s name to Levitation Fest in 2015 as a tribute to Austin’s own psych-rock pioneers, The 13 Floor Elevators. The name change also served to signal a shift in programming to include adjacent music stylings that didn’t quite fit the psych-rock mold. This shift has widened the audience for the festival over the years giving it almost a mini-South-by-Southwest feel, especially as fans darted from Stubb’s to Empire Control Room and over to the Mohawk – venue stalwarts that survived the pandemic.

On Thursday night, Crumb provided Stubb’s a Mild High liftoff as they focused their hypnotic psychedelic set around 2021 LP Ice Melt (showcasing eight of its ten songs). The audience was doused in hazy trip-hop melancholia that recalled fellow Levitation alum Dungen and the invitee but last-minute canceled act, Melody’s Echo Chamber from 2015. Crumb flexes a strong sense of dynamism in their compositions, and their live set regularly guided the Stubb’s audience from lounge-y coziness to propulsive psychedelia and back, often within the same song. Syrupy effects, ethereal textures, jazzy drums, and shapeshifting vocal, guitar, and keyboard tones that sounded like steel drums being played under water kept everyone on their toes.

While some chose the soothing sounds of Crumb, many packed the Mohawk across the street for a heavier dose. Austin’s heavy metal band The Well held court to a head-nodding throng at Mohawk with their Sabbath-inspired chunky psych-metal. Dual vocal incantations from Ian Graham and Lisa Alley at times seemed to emanate from the depths of a distant well (pun not intended) that lent their sludgy blues a haunted feel. The Well’s dark tunes were brought into the light by a fantastic light show across the Mohawk’s outdoor stage – the entire stage, band, and even the trees above the stage were bathed in swirling psychedelic light– making a sharp contrast to the aural heaviness.

Closing out the night at the Mohawk was Levitation alum, Fuzz, featuring Ty Segall on drums, Charles Moothart on guitar, and bassist Chad Ubovich. Fuzz pummeled its audience through a set of heavy acid rock, delighting listeners with spastic precision. Segall’s rhythmic bashes and Moothart’s in-the-red shredding recall Jimi Hendrix’s roaring power trio psychedelia. The crowd stomped along in revelry to the smoldering blend of punk, rock, blues, and ethereal psych, proving (yet again) why Fuzz is a must-see. For anyone who missed out, be sure to check out Fuzz’s new (September 2021) live Levitation Sessions LP!

It’s no surprise that The Black Angels created a music festival rooted in that passion where every band you listen to is your next favorite band. The Black Angels have lost a connection to their fans, even with a lack of (much) live music over the past year and a half. Technically having not played a live show since February of 2020, it felt like from the moment they played the first note of their set in “Young Men Dead” from the album Passover on Friday night at Stubb’s, time stood still and the pandemic faded into a distant memory. Getting lost in their set is how live music should make you feel. There were a few new songs in their setlist, and it’s been almost five years since the last album, Death Song, so perhaps there might be a new album set to release soon.

While Stubb’s featured more masculine energy, Friday night at Hotel Vegas was for the women. In keeping with the evening’s themes (1: mostly females, 2: from LA, 3: costume-garbed), The Paranoyds took the outdoor stage at 8:30. Paranoyds’ bratty playfulness warmed up the early Friday-evening crowd as they carved through a setlist heavy on tunes found on 2019’s Carnage Bargain LP, with guitarist Lexi Funston and bassist Staz Lindes trading instruments mid-set for a few tunes. Laila Hashemi’s wobbly, Manzarek-like keyboards underpinned the four-piece’s poppy punk, creating a distinctly campy vibe, like a surf rock band transported from a late-1960s B movie. The band grew more infectious as they got deeper into their set, closing with the heavy slow burn of “Sunburn”.

Garage rock trio L.A. Witch replaced their brooms for devil horns at the next performance on Friday night. The pandemic was a real drag on bands releasing new material in 2020 – lead singer Sade Sanchez lamented that it was nice to finally get to play new songs from their album Gen-Z live from 2020 after sitting out for over a year. Perennial Levitation Fest performers La Luz closed out the evening with surf psych lifted up by the soothing harmonies of vocalists Shana Cleveland, Alice Sandahl, and Lena Simon. They also debuted new materials as they worked through a maturing sound on the self-titled album La Luz from this year.

There has always been a need for more day showcases and Levitation 2021 did not disappoint. An entire afternoon/early evening of bands occurred on Saturday, giving fest goers the opportunity to see five acts in a mere four hours. Local Austinites and a group self-prescribed as “A band for Quentin Tarantino,” Annabelle Chairlegs crooned out their desert noir for a large crowd of early attendees in the Empire Control Room Garage. Meanwhile, on the inside stage, Silver Synthetic, a garage-psych trio from New Orleans donned their Halloween best to dazzle the growing audience.

Levitation Room, a garage-psych band from Los Angeles drew music fans back outside and got the crowd to start to vibe in unison as the sun set. OHMME, the rock trio from Chicago, built dance energy into the final set of the night, before surf-rock band Shannon & The Clams took over. In true fall holiday fashion, most bands dressed up, and in some cases, their instruments for the festive, chilly occasion. Frontwoman Shannon Shaw always brings an incredible energy that swung the party into full effect for another incredible evening of Halloween merriment and psychedelic vibes in downtown Austin.

Festival organizers should be commended for booking acts that featured artists that were diverse in both sound and appearance. The lineup on Saturday night at Stubb’s took the crowd into orbit like a Jeff Bezos rocket with Shabazz Palaces and Thundercat. These two African American artists presented an interesting duality. On one side you have Shabazz Palaces featuring Ishmael Butler, a.k.a. Butterfly, known for his work with the ‘90s jazz-funk group Digable Planets, and on the other side you have Thundercat who’s radio-friendly R&B hits are belied by his true desire to extend the limits of his six-string bass. Shabazz Palaces emerged on a mostly darkened and smoky stage while Butler played samples and built up a dream world of space-tinged poetry that was abstract and transcendent. Thundercat’s performance was no less than a Miles Davis-like jazz voyage. He didn’t play songs as much as he lit the fuse on a bottle rocket while we held onto it with our dear lives. His most recognizable songs like “Dragonball Durag” would start a groove that would descend into ten minutes of gravity defiance before returning to earth – it was quite possibly the best set of the weekend.

Austin’s psych scene is alive and well and several of bands on local Spaceflight Records captivated festival goers at Empire Control Room on Halloween night. Billy King & The Bad Bad Bad got the costumed audience moving early in the evening. Led by the charismatic and eyeliner adorned Billy King, the rockers’ highlight was a sludgy and banging version of Blue Oyster Cult’s “Godzilla”. On the other spectrum is the quirky poppy and psych-driven grooves of Calliope Musicals. Led by tireless dance moves and vocals of Carrie Fussell, the crowd was showered with pill bottles during the middle of their set that said, “Take ten capsules by mouth pass to person next to you.”

No headliner on a Halloween is more appropriate than Golden Dawn Arkestra. This band with a cult like following capped off a great week of visual, immersive, and transcendent creativity. Austin fans reveled in classic tunes such as “Dimensions”, “Sama Chaka”, and “Stargazer”, and were treated to new song “Success” that delivered a much needed message of affirmation. The festival as a whole was a much needed success for Austin music. Red River music venues are alive again and those interested in more transcendent forms of musical expression found their tribe of hippies and headbangers at this year’s Levitation Fest.

The festival as a whole was a much-needed success for Austin’s live music scene, melding hippies, shoe-gazers, and headbangers into one. After nearly two years of stages going dark, not all venues made it out such as former Levitation venue Barracuda that shuttered early in the pandemic. Levitation Fest and the Red River Music District have proven to be an important partnership. They helped each other come alive again especially for those interested in more transcendent forms of musical expression.