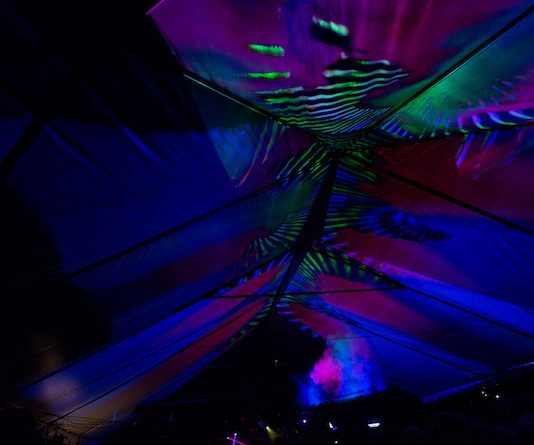 Reverb Society’s Levitation Festival started a bit earlier this year, with an additional day added on Thursday, November 27th. With perfect weather on the schedule as well as plenty of great acts to choose from, it was no surprise that downtown Austin, TX was lively with concert-goers and excited fans of the now nine-year old festival.

With The Jesus and Mary Chain playing at the same time slot that W.I.T.C.H. was playing, it was a challenging decision to make but we were able to split the show schedule and catch both. The Jesus and Mary Chain hadn’t played in Austin since 2017 (QRO photos) so it wasn’t a surprise to see many die-hard fans lined up for hours to get as close to the stage at Stubb’s BBQ as possible.

Opening with “Amputation” from 2017’s Damage and Joy (QRO review) and then moving immediately to 1989 Automatic’s ”Between Planets”, it was clear that the band would be playing songs that spanned the entirety of their career. Although we weren’t able to catch it, the band played the infamous hit “Just Like Honey” with guest musician Izzy Glaudini from Automatic as a perfect encore.

Over a few blocks at the Empire Control Room at nearly the same time, W.I.T.C.H., a known zamrock band from the 1970s, coming off a full 2022 tour, played to a sold-out crowd of seemingly younger fans. Although it didn’t appear most fans knew the words to songs such as “Living In The Past” and “Chifundo”, everyone danced as though they had been listening to W.I.T.C.H. on a daily occurrence on their Spotify playlists.

Although rain threatened the first night of Levitation Festival 2022, the spirit of the festival felt great and it’s good to see Austin-based band, The Black Angels keep this festival going as psychedelic music is still such a huge part of Austin’s musical make-up.