Lincoln Center’s Appel Room (formerly Allen Room) is located on the fifth floor of the Time Warner Center on Columbus Circle, with an official ‘Jazz at Lincoln Center’ entrance... 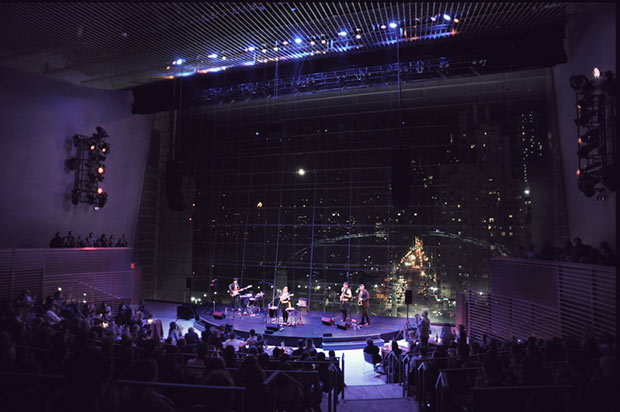 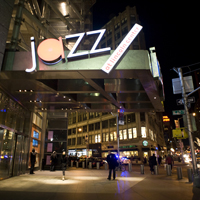 The Appel Room actually stretches across the fifth and sixth floors, with nice outside waiting areas on both floors.  The stage is located at the center of the auditorium-like semi-circle; behind it is a sloped window looking out onto Central Park West, providing an absolutely stunning view.  The audience area is roughly divided between the nightclub-like tables and chairs up close to the stage, and the raised levels with seats, as well as higher, box-like seating on either side.  There are ushers directing you the entire way, from when you come out of the elevator, right to your seat.  Naturally, the lighting and sound system are top notch, though there’s less of a ‘light show’ than at rock venues.  The raised semi-circles of seats provide great views from pretty much anywhere – even photographers, limited to where they can shoot from, can get great photos (though only approved photographers may take photos of any kind, and ushers are on the watch for cameras from the seats).  Drinks are sold in the waiting area, but it appears that only those at tables can have drinks inside the Appel Room.

The ‘American Songbook’ series, held January through March, provides more modern, even indie acts (often locals, though big-name indie locals), and can draw a crowd that might otherwise be unfamiliar with the venue.  Tickets are more expensive than the same act at, say, a Bowery Presents venue, but the sound, atmosphere, and view are superior – the stunning view of Central Park West is almost worth the ticket price alone (plus, the Lincoln Center hook can bring in special guest stars).  The more modern feel of the venue, and Time Warner Center as a whole, also counteracts any ‘too classy’ feel.  Really a special place to see a special act do a special performance. 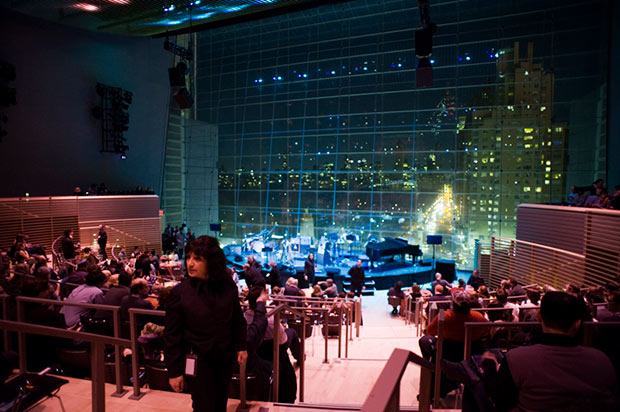