“I miss California / Almost as much as I miss you / But how I can live somewhere / Where the bars close at two? / That ain’t... 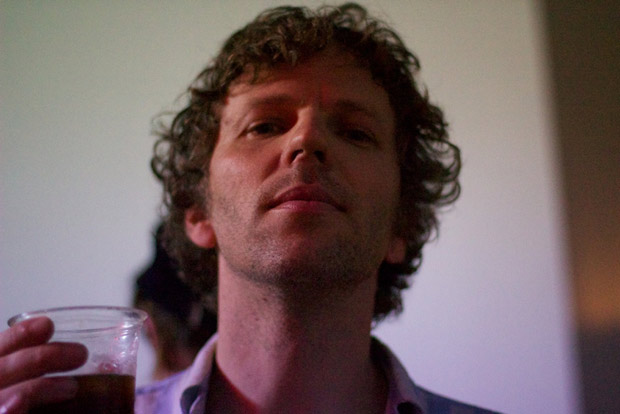 Click here for photos of !!! at 2014 NOS Primavera Sound in Oporto, Portugal

Click here for photos of !!! at 2014 Primavera Sound in Barcelona, Spain

Click here for photos of !!! at 2013 Bumbershoot Festival in Seattle, WA

Click here for photos of !!! at 2013 FYF Fest in Los Angeles, CA in the QRO Concert Photo Gallery

Click here for photos of !!! at Music Hall of Williamsburg in Brooklyn, NY on December 13th, 2012

Click here for photos of !!! at 2011 Pacific Festival in Silverado, CA

Click here for photos of !!! at 2011 Sasquatch! Music Festival in George, WA

Click here for QRO’s review of !!! at Williamsburg Waterfront in Brooklyn, NY on August 16th, 2010

While June was packed with great stuff to see NYC, July has been lighter (QRO NYC Show Preview) – but one of the best summer series in the Big Apple is one that started at the end of last month and has just kept going, House of Vans.  The warehouse & skate park near the East River in Brooklyn (QRO venue review) is holding free shows there, heating up as the weather has done the same.  And maybe the best one all summer was now-locals !!! on Thursday, July 18th.

It was another hot night in New York, and while there’s a roof over the main area at House of Vans, there’s no air conditioning, so the acts that play the place better be either really chill or really alive.  The 2013 season started with the always-live Fucked Up at the end of June (QRO review), and then followed with the always-chill Toro y Moi on the 11th (QRO photos).  As their name implies, !!! are decidedly on the alive end of the spectrum, having helped give birth to the indie dance-punk scene and just kept on going.  Singer/frontman Nic Offer might not have the giant, shirtless belly of Fucked Up’s Damian Abraham (QRO photos), but he’s got some short-shorts and killer dance moves (and his curls bounce great when bustin’ a move).

!!! were playing House of Vans just after the release of their latest, THR!!!ER (QRO review), which has put them back on the forefront of the dance-punk scene (after coasting a bit with the prior Strange Weather, Isn’t It? – QRO review).  Early on they hit up two of THR!!!ER’s best tracks, “Californyeah” and “Even When the Water’s Cold”.  “Water’s Cold” was obviously welcome on the hot night, but “Californyeah” was extra-special, since it has the awesome line from Offer, replying to friends from the band’s native California about !!!’s move to Brooklyn, “I miss California / Almost as much as I miss you / But how I can live somewhere / Where the bars close at two? / That ain’t right!!!”

The bar at House of Vans doesn’t stay open past 2:00 AM – in fact the free beer intentionally runs out early, so the crowd doesn’t get too wasted, they pay attention to the headliner (the stage is out of view of the beer area), and to limit the number of people who just come for the free drinks (it also keeps down lines at the port-a-potties…).  However, it did last way longer than at Fucked Up’s performance (and didn’t run out backstage or in VIP, like that first night).  But you didn’t need drinks to enjoy !!! “Get That Rhythm Right” at House of Vans. 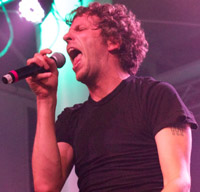 And House of Vans keeps on going, with three more free shows this summer: 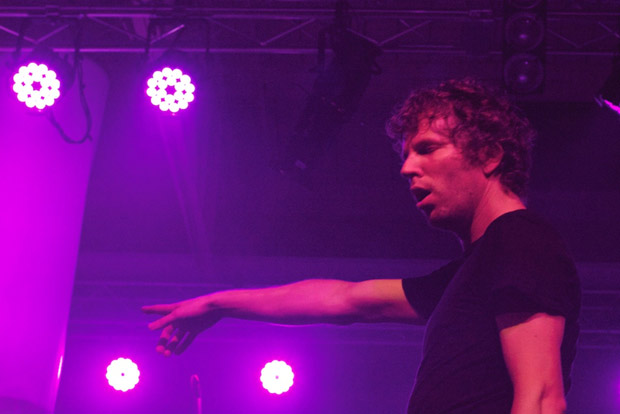