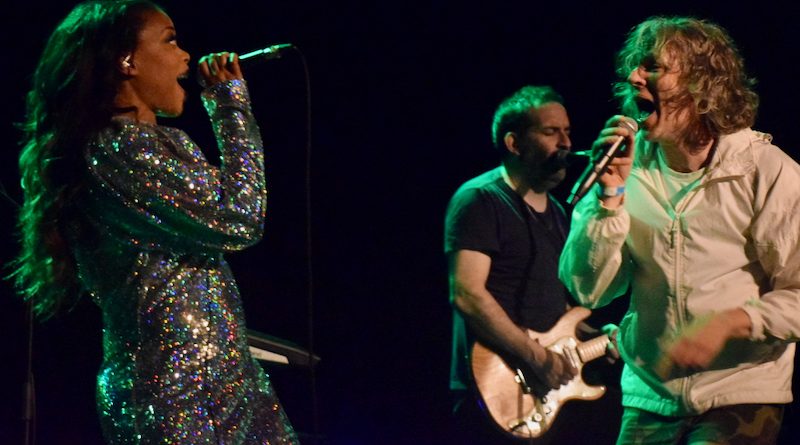 You want COVID to be over, you want to dance, but COVID ain’t over (and there’s a war in Europe, and our democracy is in peril, and…), so how can you dance? Oh, and you’re not a good dancer, were only dancing at home alone since before the lockdown – what do you do? Go see the most dance-positive act in the world, !!!, who played their adopted hometown of Brooklyn at Music Hall of Williamsburg on Thursday, June 9th.

One of the greats from New York’s dance-punk scene of the aughts, we are admittedly years removed from back then, so removed that there was even a recent ‘nostalgia for the aughts’ festival in Los Angeles, Just Like Heaven – which !!! played (QRO photos). And they’re not LCD Soundsystem or something, so this wasn’t like ten nights at Brooklyn Steel, but just a school night at Music Hall of Williamsburg (QRO venue review). There was some room on the dance floor, but that meant room to dance – and there was dancing.

Even if you’ve got two left feet, anyone can move to the rhythm of !!!. The group is touring behind this year’s Let It Be Blue (QRO review), another upbeat move-buster from the band, with pieces such as the night’s openers of “This Is Pop 2”, “A Little Bit (More)”, and “Panama Canal”. While “Pop” served as the night’s revver-upper, it was the big response to frontwoman Meah Pace coming out to join frontman Nic Offer (QRO interview) during “Little” that blew Music Hall up. Maybe some of that was Pace’s sparkly outfit, which Offer acknowledged looked better than him in his trademark “shorter shorts.”

And Offer brought those short shorts into the crowd more than once, to join the dancing audience on songs from Blue’s “Un Puente” (where bassist Rafael Cohen got to come up to sing the Spanish language parts) & “Here’s What I Need To Know” to “Our Love (U Can Get)” from 2017’s Shake the Shudder (QRO review) and “Freedom ‘15” from that year’s As If (QRO review). It was notable that the band never went back before 2015 in their set list, nothing from 2007’s hit Myth Takes (QRO review), for instance.

But !!! know how to make anyone dance, any time – even today.