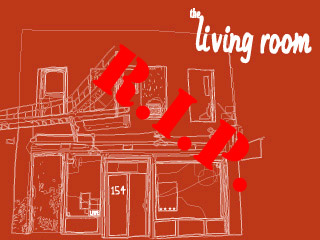 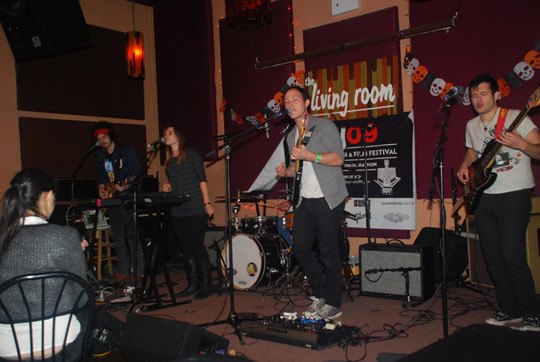 The Living Room closed its doors in January ’14, but relocated in October to a Brooklyn spot (which later closed.

Living Room is located on 154 Ludlow Street, Manhattan, between Stanton and Rivington Streets.  It lays on the same block as venues Piano’s and the next-door Cake Shop, around the corner from Arlene’s Grocery, and within the circle of venues in the Bowery (roughly between Houston, A, Delancey Street, and Bowery), which includes those four, Mercury Lounge, Bowery Ballroom, Rockwood Music Hall and others.

The front room at Living Room is a bar, not as skinny as other Bowery venue-bars, with a seated sofa area to the right as you walk in.  The bar itself is popular in its own right, and there is a small space upstairs, known as ‘Googie’s Lounge’.  The actual venue is located on the other side, behind a velvet curtain.  There’s a bathroom and waitress-only bar to the immediate left upon walking in, and an elevated soundboard to the immediate right.  Past that, there is a collection of small tables and chairs, more akin to a coffee house than a rock club.  The stage itself is on the other side, and only a step up above the stage floor.

Living Room is one of a group of low-end venues in the Bowery – small, lesser facilities, cheap drinks, etc.  In fact, its price is so low that the shows there are often free, though there is a tip jar that is often passed around.  The waitress-only service in the stage floor is something one sometimes has to work around.  It mostly hosts singer/songwriters and various types of roots or Americana acts.  It can be difficult for such an act to exceed the limitations of the space, but bands can do it and really create a rock show.  Not a regular haunt by any means, but worth keeping an eye on for free sets by skilled musicians.