QRO caught up with author Lizzy Goodman ahead of the premiere of 'Meet Me In the Bathroom', the documentary based on her book about the early aughts New York... 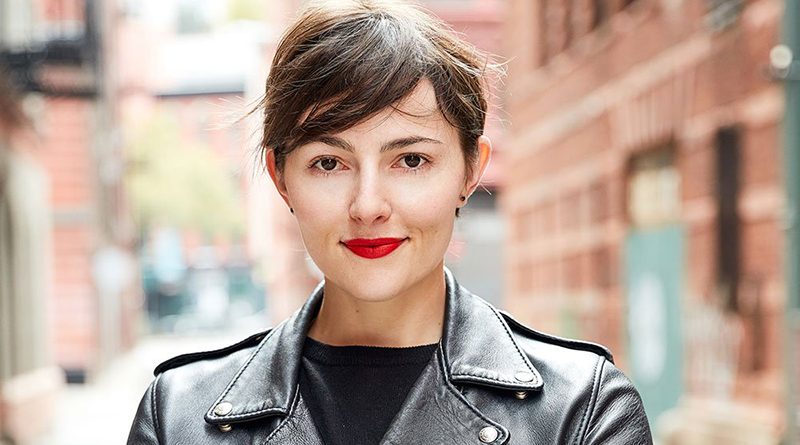 “So.. Karen O…” asks an unknown voice at the start of Meet Me in the Bathroom, the forthcoming documentary chronicling the early aughts New York music scene, “do you like the film Dirty Dancing?” The Yeah Yeah Yeahs frontwoman laughs before answering with, “Yeah I do – I love that film. You go away with your family for the summer with your family, you stumble into this underbelly, this cool, sexy scene. And then reinvent yourself.” The notion of reinvention is at the core of Will Lovelace and Dylan Southern’s new film, based on Lizzy Goodman’s 2017 book of the same name. Through a blend of archival footage and audio interviews, Meet Me in the Bathroom highlights the origins of what would become some of the biggest bands in the world; following groups like The Strokes, the Yeah Yeah Yeahs, LCD Soundsystem and Interpol as they’re launched from dingy East Village dives and Brooklyn warehouses to the world stage. QRO caught up with Lizzy Goodman ahead of the film’s New York premier.

QRO: The film opens with a few lines from Walt Whitman’s ‘Give Me The Splendid Silent Sun’. His work often celebrated the electricity and excitement of New York. The film perfectly encapsulates a specific, electric era in New York City. As an executive producer on Meet Me In the Bathroom – what was most challenging about translating the book to the screen?

Lizzy Goodman: Thank god it was not my job in full. It was really Will [Lovelace] and Dylan [Southern]’s – the amazing directors of this film. I felt like, “I’ve applied all of my narrative skills to the execution of this written document that now exists, and here it is – it’s giant and exists between these pages.”

Turning that into a visual adaptation and incarnation of those same themes (or some of those same themes at least) was something that I was incredibly excited to see, and incredibly excited to help with – but importantly was not in charge of. Will and Dylan came to me with a really strong vision for their project that aligned in a lot of ways with the things that I had cared the most about the book. That’s kind of how I thought of it. It was like, “Well as an [executive producer] on this, my job is to be a resource for them when asked, give notes on cuts, make introductions when necessary, and let them have access to my archive” – but past that it really isn’t mine in the same way.

In that sense there’s a fear around surrendering control, which you know – you’re a writer. We don’t like surrendering control. That’s not our vibe, but it’s also exciting because my relationship with this film is – in some ways – a lot less fraught and more emotional and experiential than the book could ever be.

My relationship with this film is – in some ways – a lot less fraught and more emotional and experiential than the book could ever be.

QRO: Well, I’d love to hear about what you saw in their vision that made you want to continue with Will and Dylan.

LG: It was 2017, and the book was about to come out. I was living upstate at the time, and I got this text from Paul Banks [of Interpol]. And he said, “Hey – so there’s these guys in L.A. who want to talk to you about making a documentary about your book.” I hadn’t even put it out yet, so I was like, “What?! How do they even have it? What do you mean?” Those two guys were Jamie Neely and Brian Levy, both of whom are credited in the film as well. So, I met those guys and there was just the right kind of fannishness.

This story requires a sense of pure pleasure and connection to the magic of this time and the art that was made by these bands. That was really important to me. People in the creative worlds often overvalue this idea of cross-armed coolness – where being really into something is kind of lame. I’m just so against that, and I really wanted both the book and any film that was ever made based on it to feel proud of its own enthusiasm for this place in time.

But what I knew from having lived through this on the ground floor is that was not how it felt. People felt like these people were cool. Seeing the Yeah Yeah Yeahs for the first time was like “Oh my god – what even is that”- but these are like sweet, sincere, earnest, lovely human beings. Julian [Casablancas, of The Strokes] was so nice to me when I was 20 years old. There was a lot of competition and there were people trying to one up each other, but these are also a bunch of nerds who arrived in the city, wanting to chase something important and big and not knowing how to do that while finding each other and executing these magical, insane bands out of that story. I really wanted that to be the attitude of the people who made this.

When I finally met Will and Dylan, I felt their passion for this time and how much these bands had meant to them on a personal level, and I also thought it was valuable for them as Brits to have a slight remove from it, to not have been quite so much in the center.

People in the creative worlds often overvalue this idea of cross-armed coolness – where being really into something is kind of lame.

QRO: We spoke shortly after Meet Me in the Bathroom [the book] was released, and one of the things you mentioned was that the LCD Soundsystem and Strokes shows at the garden helped you realize that these groups had grown beyond what felt like a small community to become your generation’s genuine rock stars. It’s now been over ten years since those shows – how do you think the legacy of these bands has changed or solidified?

LG: I mean, I think the proof is in the albums people are putting out. LCD [Soundsystem] has new music coming out, the Yeah Yeah Yeahs have just put out an extraordinary album (their first in I think it’s nine years?) [Cool It Down – QRO review] and seemingly returned even bigger than before somehow. They just played the two biggest shows of their career!

Interpol has been touring and making new music and The Strokes are still doing what they’re doing, feeling both inspired and empowered. From the outside, it looks like all of the main figures that we’re talking about here are still kind of on a path that feels recognizable from this period of time. Which is crazy. It never lasts this long. I feel like all of these artists have continued their own legacies, and in a collective sense, therefore, represent that space, that thing or whatever it is why you go to New York.

It’s exciting because, as I said to you then, when I saw those two shows at [Madison Square Garden] – it definitely felt like the birth period of those bands and of this scene was ending. It didn’t feel like seeing those bands in 2011 was like, “Oh, they’re over now.” it wasn’t like that. It was more like something has ended and something else is beginning.

I think the story of New York is always a story of disappearing, and it’s a story of like endings and beginnings all happening at the same time on top of themselves.

QRO: There’s an aspect of the documentary that I think is slightly haunting in the sense that many of the venues and bars and neighborhoods are entirely different or don’t exist in the way that they used to. Does that affect how you look back on that time as a whole?

LG: Yeah, definitely. I think the story of New York is always a story of disappearing, and it’s a story of like endings and beginnings all happening at the same time on top of themselves. It is the nature of any time in the city to watch the places that you loved, change or disappear while new places pop up. It’s the fundamental ‘choose your own adventure’ of New York City. The layered nature of it is what we love.

And it’s also the anxiety of the place, you’re always feeling a little out of breath like “am I doing this right?” Even at the peak! You’re in the coolest bar and the coolest night with the coolest band with the coolest other people and having the best time, but there’s always this simultaneous sense of awareness that is also happening somewhere else – and probably down the street. So yeah, it’s weird.

You know, when I first moved to New York in 2002, getting a cab to take you to Brooklyn was like a complete joke. I lived on the Lower East Side. If you held a cab to take you over the bridge to Brooklyn, they would be like, “Get out… no.” And then five years later, everybody I knew in England was trying to move to Williamsburg. I don’t I will not say I feel sad. But I sometimes feel wistful for what was and what is no longer there. But this is always what’s happening. One person’s history is being written over by a new person and a new group.

QRO: So, Karen O praised the film, describing it as a “time warp” – how do you hope people come away from the documentary?

LG: “Time Warp” is pretty good. The scope of the film is inherently narrower than the scope of the book is and so there’s like, that’s just the case, and the film is a complete thing in and of itself. So, the goals of the two don’t have to be the same, but in this area I think they are, which is to say that I want people to feel if you lived through this or wanted to. If this is an era that means something to you on a personal level, because you’re of an age where you would have experienced a version of it or love these bands.

This movie is for me and my friends in that way, and Dylan, Will and their friends. By friends I mean anyone else who loved Franz Ferdinand or The Libertines, or The Killers or Kings Leon or The Strokes; representatives of something wild, free and fundamental to the notion of what sex drugs and rock’n’roll represents as a concept, not a literal reality. So, the time capsule thing that Karen’s talking about – in some ways I feel like this film is timeless and want it to be timeless. I want it to feel like it’s a coming of age story.

Watch the trailer for Meet Me In the Bathroom:

Titus Andronicus – The Will To Live