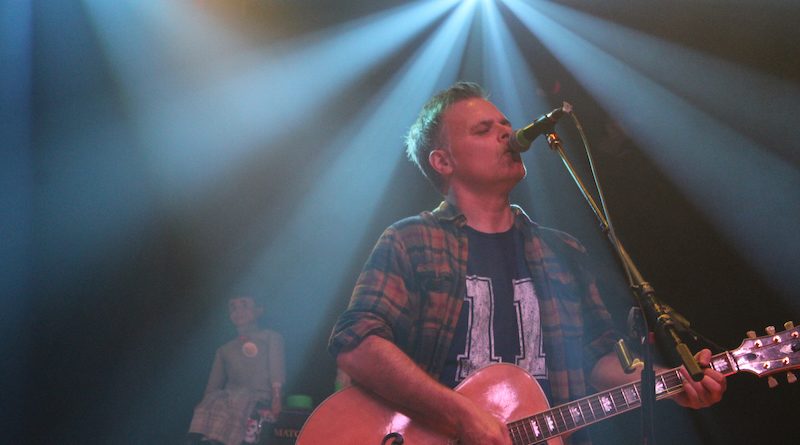 If you have never ordered anything from a Delia’s catalog or watched in envy as a cooler friend did so, you are likely to get little of value from this article. If intentional noose-looped amplifier feedback at maximum volume does not feed your spiritual molecules at their marrow-origin, read no further as this review will not speak your shadow language. Anyone who has made their laboriously loyal way through any two of my rock writings at any point in the past will know too well that there are two pet sounds that plague every piece I pen, no matter the length, no matter the band. Neither has anything whatsoever to do with the untouchable genius of Brian Wilson and both I never stop broad-back bitching about to any sod who will listen and to many who claim they will not. The first of those rock-fairy frets concerns the fate of the twelve-string guitar in the post-Tom Petty world. The second is the vexatious dearth, since approximately 1994, of real-deal grunge under-rumblings played by gold-crested doss house dirt-bombs (not their modern-day pastel-grunge Pinterest-produced counterparts). Feverishly panicking where these sounds are going and how to preserve a global audio habitat wherein they might keep regenerating causes an inordinate amount of lost sleep on this side of the funk forest. On Saturday, November 26th, all apprehensions on this latter momentous musical matter were dismantled for three solid hours with genial force as Local H brought their Here Comes the Zoo 20th Anniversary Tour to Atlanta’s Masquerade Hell and, instead of kaftans, those Pigpen communards wore garage-grease hydro-dipped in welcome wreckage.

Between first and third wave grunge there existed exceedingly few bands worthy to carry the title, though we feral faithful curled our lips and gnashed our teeth at many a postulant poseur who thought buying a Fender Jaguar and a torn flannel was all you needed to qualify. There were some who did not understand that the requisite primal scream could not be purchased, not for any sum of money, and for that a soporific dullness took root where once mud and thistles had been the head-crowns of all the local heroes. Between the bookends of this sound that are Kurt Cobain and Craig Nicholls, and in the time-distance between Seattle and Sydney, there were almost zero bands on everyday radio holding the shredded ribbon of this kind of rock music aloft and/or irreverently dragging it through the appropriate kind of mud(honey).

Thanks to the cash-minded consensus of the music industry’s notoriously unscrupulous moguls, second-wave grunge was very nearly an invisible undertow, but the ones we did have carrying the blackened torch jauntily between their undomesticated canine incisors were beyond spectacular and seminal in their restless mechanics. Australia, always hyperalert to the galvanic howls of my harridan-heart, sent Silverchair to solder to my soul, thereby rescuing it from certain strangulation during the age of the Limp Bizkit ascendancy. England heard my unsaid soul-swivet, as always, and assigned Bush to cross the Atlantic and quell the quake. Even though I do not normally cosign on Bushes of any kind, that particular one was a compulsory life support machine for my head. Lastly, not to be outdone, America said, “We’ve got one more for ya too… and you’re gonna love this bit… they’re from Illinois.” That divine dollop of middle-American melee was Local H.

No one but Scott Lucas could ever have fronted such a band ­– a big-decibel duo built on oblique malfeasances of manners well before rule-ramshackling duos were at all a thing in rock-n-roll. Lucas, a boy who could laugh at caviar and limousines but knew what a honky-tonk waltz sounded like and wouldn’t balk or even bat an eyelash at any of the above, was and remains an urban berserker of sardonic intelligence and churlish charm, still a boulevardier of a bedlamite who had the stones not to dabble in formality even for a second and instead immediately proclaimed his full intention to play raucous, riveting, rust bucket rock, and make fun of the prom moms while he was doing it too. In the years since As Good As Dead made alternative radio feel alive again, Lucas has not been declawed by parenthood or bore-besmirched by any of the exfiltration events that have befallen others of his genre who, in one measure or another, gave way to the extended cults of Isis, Dionysus, and Cybeles. He still covers his crocodiles in confetti, and there are still plenty of us out here who say: give me a sententious squire of a salient rockstar to exchange wistful glances with any day. Experiencing Lucas’ masculine energy in any room ­– but especially one as archly antinomian as the Masquerade’s Hell ­– is like taking a visual and sonic booster shot containing the complete anecdotal history of the pre-fuckboy epoch, like suddenly having the full use of your pre-internet brain back again.

In Atlanta, dressed in workman’s coveralls, with black masking tape crisscrossing his pickguard, and standing in front of the doll-faced coin on the band’s backdrop, which bore the inscription ‘Who’s the dummy now?,’ he was the acid-anchorite of emotional heft, the griot of grime. Local H was always impish and insolent where others in the kiln of their kin were terminally grave, but the X factor of their extraordinariness was that they also had more party vision than their peers. You got the sense they were here to both smash the patriarchy and skillfully obviate the perspectives of men who had been equal parts more and less than a feminine leisure activity at varying stages of life. This cromulent crudeness was not just communicated in the watchword lyrics, but in that other thing Scott Lucas is: a far better clunk-chord craftsman than the donnish credibility cadets holding sway over what the public thinks guitar players should be want to say aloud. Doing so would mean admitting that it is actually much harder to write hard-hitting guitar songs that are not all that hard to play than it is to exhibit a virtuosic understanding of all the modes.

Hearing “All The Kids Are Right” for the first time in 1998 on Atlanta’s recently resurrected alternative radio station, 99x, made us tentatively believe we would be proven so while “Bound For The Floor” kept us from the fate warned of in its title, and “Eddie Vedder” read like the candid operational report of the dominant thought in the minds of every non-Seattle stripling any of us ever knew in the nineties. However, it was the absolute balls and balderdash of “Hi-Fiving MF” and its hardpan sludge that first left us writhen with proper Local H lust. With grunge being the last formal wave of music in which the social thinking around the genre became the teen kingdom its acolytes (like yours truly) grew up in, Local H had (and continues to have) the stomach to show that being the good-guy kind of seedy is not just fun but swell, and Atlanta was awarded each of the aforementioned when their big Zoo came to our little Hell. Beginning with a solo acoustic set handled by Lucas all by his lonesome, the band then played Here Comes The Zoo in its totality from start to finish and folded in some renascent filth from a few of that frenzied frisbee’s fraternal order, as well as some rattlecap covers leaned aback spontaneous outbursts of sporting levity.

The spiraling excrescences of “Turn The Bow” buoyed the hiss of “Smothered In Hugs,” which represents Local H’s recapitulating contribution to the decidedly epicurean Sling Blade soundtrack, but is originally a bit of Guided By Voices glory. Local H never did confine themselves to the common-tongue chastity belts that capsized the second album and beyond of many of their contemporaries. From the very start, it was evident that they were hot-headed habitues of a harder habit, the hale heirs of a surlier switchback, and that they clearly felt no need to conceal their cunning when it came to their plans for becoming rock-n-roll LIFERS (QRO review).

Ailurophiles aside, few that really spent time with it failed to love 1998’s Pack Up The Cats. “All-Right (Oh, Yeah)” off that amoral beast sounded like the transmission of a trippy tank commander trying to describe what he was seeing as he looked square into an unwinnable abyss – the deranged kind of defeated. Before they trained their tangled eye on Track 1 of Here Comes The Zoo for the ATL, Lucas and drummer Ryan Harding vroomed through voluntary vertical malfunctions galore in the form of a scalene cover of Robert Plant’s “Big Log” that appeared on their Quarantine Mixtape #3 collection and a deafening delivery of “High Wide and Stupid”, among others.

It was some sacred form of scuzzy satori, the sheer nostalgic anarchy of hearing “Half-Life,” “(Baby Wants To) Tame Me,” “Rock and Roll Professionals,” and “Keep Your Girlfriend Away From Me” while immersed in a crowd full of old-school plaid-clads slinging strands alongside a bunch of bona-fide baby ones too, who had clearly not just clicked the whole affair out of their latest, lamest Urban Outfitters feed. There was gloriously long and unwashed hair in abundance, thrifted Vans falling apart on nearly every far-wandering foot, and ratted out tour t-shirts from every secret favorite band worth having any which way you looked. There were real cigarettes outside, the kind whose stink sticks to your shirt like pit-sweat for the rest of the night rather than muffin-scented vape clouds as temporal in nature as their users’ commitments to anything but Netflix laziness as a life mantra. I even caught the scent of genuine cloves at one point, bloodhounded my way to the responsible party by snoot alone, surreptitiously sniffed the smoker’s slatternly sleeve like a starved puppy, and then purposely stood by him the rest of the show just to continue to smell the clove swirling in the fetid air in perfect tandem with the music/era/ethos it has always exemplified.

Playing this show on the same day upon which the immortal Irene Cara crossed the rainbow bridge, Lucas and the Local H lot could not resist a “Fame” interlude that then morphed into what several in my standing vicinity dubbed “The Georgia Satellites: Concussive Edition Break.” You don’t think “Keep Your Hands To Yourself” can sound like Mother Love Bone but it can, and did under this louche Local anesthetic. My fountain pen bursts with blotted pride to report that this show was so unbelievably 1990-loud (which, yes, is its own species of volume) that the wall of waves was making the change in my pocket involuntarily pogo. Busted eardrum bliss the likes of which one simply cannot buy anymore. This jagged jennet planted herself like a mutant sunflower that only responds to photosynthesis-by-sound directly in front of the monitors, come cochlear damage what may, chest curved fully open and up, just so she could feel the fangs of the fortissimo, drink in how the roar would hurt. This brand of bruit, at that lower hamper of Hertz, is a kind of baseball bat to the body only a dirty-D tuning and a metal zone pedal or some other such godsent gadget of that order can do.

Lucas’ playfully iniquitous audience banter, including the deadpan gold of “I don’t take steroids but if I did, I would buy them from you” directed at an overzealous male mosher, was perfectly pitched against the vintage Pee-Wee Herman dolls and road-worn horror-heads harboring strobe lights hanging in various states of death and delight from his amps. Closing with a Misfits medley that melded into “MFer” and housed a “Helter Skelter” bridge in the middle, even the end of this show was brimming with great, high plains of long-riff loveliness. Some of Atlanta’s alterna-angels are still hanging from the rafters of Hell weeks later, and we remain grateful to Local H for the aural attornment and the musical mischief.